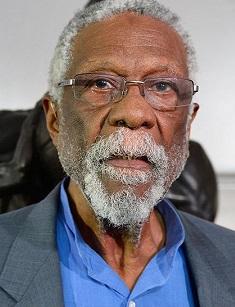 Bill Russell is an American retired professional basketball player who performed on a center position under No. 6 for the Boston Celtics of the National Basketball Association (NBA) from 1956 to 1969. Later, he became the team’s coach.

What else has Bill Russell reached in his career? Read below and know!

Bill Russell was born on February 12, 1934, in Monroe, Louisiana to the family of Charles and Katie Russell. A white population dominated in the district where he grew up, and his family often became the subject of racism. So, once Russell's father was refused service at a gas station until the staff had taken care of all the white customers first. When the man planned to leave and find a different station, the attendant stuck a shotgun in his face and threatened to kill him if he didn't stay and wait his turn. Another incident referred to his mother – once she was walking outside in a fancy dress when a white policeman accosted her and ordered to remove the dress cause it was "white woman's clothing."

So, Russell's childhood was rough – he lived in poverty, often had to reside in public housing projects and faced his mother's death at the age of 12. His dad quit his trucking job and was hired as a steelworker to be closer to his semi-orphaned children.

Speaking about his education, he studied at McClymonds High School where he started playing basketball under George Powles, the coach. Powles encouraged young Bill to develop his abilities and become a good player. Russell soon became known for his unusual style of defense.

When it came to choosing a university to study at, Bill Russell was offered a scholarship from the University of San Francisco (USF). It brought him an opportunity to stop living in poverty and endure racism. Attending the university, Bill Russell trained under the guidance of the coach Phil Woolpert. Bill was the centerpiece of a USF team which became a formidable college basketball team. He led the squad to NCAA championships in 1955 and 1956, including a string of 55 consecutive victories.

Russell differed from other players by his strong defense and shot-blocking skills, once denying 13 shots in a game. UCLA coach John Wooden described the sportsman "the greatest defensive man I've ever seen". During his college career, Russell averaged 20.7 points per game and 20.3 rebounds per game.

In 1956 Bill Russell took part in the NBA Draft and was selected by the Boston Celtics. He was originally picked up by the St. Louis Hawks, however, the Celtics wanted him and made a trade.

So, Russell started his first NBA season in December. He performed in 48 matches, averaging 14.7 points per game and 19.6 rebounds per game. By the moment, the Celtics had already got a reputation of one of the best teams, and Bill only strengthened their positions. That season they advanced to the playoffs. Having faced the Syracuse Nationals, Bill Russell made 16 points and 31 rebounds along with seven blocks. It led his team to a 108-89 victory.

At the beginning of the next season, the sportsman's team won 14 consecutive games. It led Russel to the title of the NBA Most Valuable Player for that season. Totally, the Celtics won 49 games.

Performing in the 1958-1959 season, Bill Russell made on average 16.7 points per game and 23.0 rebounds per game. The Boston Celtics became the winner of 52 matches – it was a league record.

In November 1959, the franchise faced the Philadelphia Warriors. Majorly, it was the clash between Bill Russell and the Warriors' center Wilt Chamberlain. The match ended with Celtics' 115-106 victory.

In the 1960-1961 season, the sportsman showed average results of 16.9 points and 23.9 rebounds leading his team to 57-22 record. The next year, his franchise became the first one which has won 60 games in a season. Russell was named NBA's Most Valuable Player one more time.

Before joining the Boston Celtics, Bill Russell had become a member of the U.S. national basketball team to take part in the 1956 Summer Olympics. Their coach was Gerald Tucker. Bill Russell led the team to the gold medal in Melbourne, having beaten the Soviet Union 89–55 in the final game.

The American team was the best one during the championship, making on average 53.5 points per game. Bill Russell led the squad in terms of scoring – he averaged 14.1 points per game for the competition. His former USF and future Celtics teammate, K. C. Jones, joined him on the Olympic tesm and contributed 10.9 points per game.

Bill Russel’s first wife was his college sweetheart Rose Swisher – they tied the knot in 1956. The spouses had three children together - daughter Karen, sons William Jr., and Jacob Russell. They divorced in 1973.

Before, he had married two wives. So, in 1977 he married Didi Anstett, Miss USA of 1968. Their marriage ended in divorce in 1980. In 1996 he tied the knot with Marilyn Nault. Their relationship lasted until her passing in January 2009.

Besides sports, Bill Russell dedicated himself to the fight for civil rights. In 2011, President Barack Obama honored Russell with the Presidential Medal of Freedom, the highest honor an American civilian can receive. In 2013, the city of Boston unveiled an interactive statue for the legacy of Russell in City Hall Plaza.

Russell is a co-founder of MENTOR. The organization wants every young person to have the supportive relationships they need to grow and develop into thriving, productive, and engaged adults. Although Russell is not currently working for the organization, he is on the Board of Directors Emeritus list.

Nowadays, Russell is still a basketball icon and an active NBA personality. On May 20, 2007, Russell was awarded an honorary doctorate by Suffolk University, where he served as its commencement speaker, and on June 7 of the same year, he received an honorary degree from Harvard University. Russell has also tried out writing – he wrote several books since Go Up for Glory in 1966. His most recent book is Red and Me: My Coach, My Lifelong Friend, was published in 2009.

Having stopped playing and coaching, Russel has starred in commercials of different sports brands.

In 2015, the documentary about Russell entitled The Player, The Coach premiered.

The franchise's coach Red Auerbach retired prior to the 1966-1967 season. As the most experienced player, Russell was offered to replaced Auerbach – and he agreed and became the first African American NBA coach.

He was growing older and tired, his health was deteriorating and by the 1967-68 season, his figures were slowly declining. However, he still made 12.5 points per game and 18.6 rebounds per game.

The following year, the franchise reclaimed the championship under Russell’s guidance. One year later, they won the tournament again, and Russell retired. So, as a coach, he led the team to 11 championships in 13 years. Totally, he made 21,620 career rebounds, which ranks second in NBA history behind Wilt Chamberlain’s 23,924.

After his retirement from the NBA, Russell became a coach for the Seattle SuperSonics and the Sacramento Kings.

Bill Russell also served as a color commentator for CBS and TBS between his coaching stints in the 1970s and 1980s. His colleague was Rick Barry and the two were reportedly both very blunt, providing frank commentary on the game.

Bill Russell’s net worth is evaluated at $10 million.