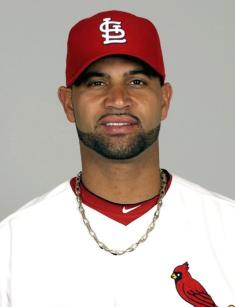 Albert Pujols, Dominican-born professional baseball player, is included in the list of the best sportsmen according to the 2008 voting. Having become keen on baseball from the very infancy, Pujols has practiced in playing almost every day of his life. That’s why nowadays he is owner of dozens of awards and titles. He started performing for the St. Louis Cardinals in 2001 and spent 10 years with the franchise. So, in 2012 he was offered better conditions by the Los Angeles Angels, and the player agreed to join them. Nowadays, he is playing for the squad under No. 5 on his jersey. Know more facts about Albert Pujols’ early life, career, relationship and current plans reading the article!

Pujols had difficult infancy. Initially, he lived with both his parents. However, his dad, a former softball player, began consuming alcohol and couldn’t stop. According to Pujols’ future admissions in an interview, he had witnessed scenes of a domestic violence by his father. Also, all the money made by his mom was spent either on healing or on more bottles of vodka.

As a result, Albert moved to his grandparents. Later, he left for America alongside his relatives in 1996 – they settled down in New York City. The family left their motherland for the sake of a better life. The United States could provide them with a healthcare, decent salaries and good life conditions.

Being a kid, Albert was already interested in baseball – he played it alongside his pals in the district almost every evening. He completed his high school education in 1998. Studying there, Pujols joined its students’ sports team and showed high stats at local competitions. While playing baseball at college, the sportsman scored 22 home runs and decided to apply for the participation in the ‘MLB’ draft.

Because of Pujols’ age, no one team planned to select the sportsman. So, he started performing in the minor league. In 2000, he was seen playing for the ‘Peoria Chiefs’.

In 2001 the player advanced to senior league and began performing for the ‘St. Louis Cardinals.’ That time he was honored with the ‘NL Silver Slugger Award’ for his playing.

By the end of 2002, Pujols had hit .300 with near 30 home runs. It led his squad to the NL Championship Series where was beaten by the San Francisco Giants.

The match against the Philadelphia Phillies (led by Brad Lidge) held in July 2003 brought Pujols his 100th home run. In September, he demonstrated his excellence at baseball by registering his 114th home run. So, the feud between him and Ralph Kiner started – they fought for the title of a sportsman who has scored most home runs in his first three seasons. Subsequently, Pujols won the competition.

2004 was marked by Pujols’ 7-year contract extension worth $100 million with the ‘St. Louis Cardinals.’ Shortly after, Albert was named the first player who has achieved 500 RBIs in the first four seasons. That time the player was diagnosed with plantar fasciitis but didn’t give up playing.

2006 season was started by making home runs in four games consecutively. In June the player had to stop performing for a month because of an injury. Having returned to matches, the sportsman received Fielding Bible Award for the first time. As a result of Pujols’ high career stats, his team advanced to the ‘World Series’ again and became its winner.

2008 brought the sportsman NL MVP award – he received it for the second time in his career.

2009 is a remarkable year for Albert Pujols – he registered his 1000th career RBI in a winning match against the Cubs. Besides, he took part in voting for the All-Star and won it with the maximum number of votes.

In 2012 the Cardinals offered him to sign a deal again, but the player denied. That year he joined the Los Angeles Angels – they signed a $254 million 10-year contract. Initially, he couldn’t get used to a new squad cause had spent more than eight years with the Cardinals. However, some time later, he began showing high results and became one of the best team’s members.

The season 2013-2014 can be named unsuccessful for the sportsman. However, in April he made his 500th career home run fighting against the Washington Nationals. At the end of the year, he was seen performing for the ‘MLB All-Stars’ in the ‘MLB All-Star Series’ held in Japan.

As for his recent seasons, in 2016 the player got the title of the 85th sportsman who has made 10,000 career plate appearances. Besides, he is the 20th player who has amassed 5,000 total career bases. Totally, Pujols batted .268 for the year.

In 2019 Albert Pujols got the reputation of the 4th baseball player who has recorded 2,000 RBIs. In July 2019 his record of most RBI through a rookie’s first 30 games was broken by Houston Astros rookie Yordan Alvarez.

Nowadays he is thinking of becoming a free agent.

Pujols’ net worth is evaluated at $160 million.

As for Albert Pujols’ relationship, he has a wife named Deidre. They tied the knot on January 1, 2000. They are parents for five children – Isabella, Esther Grace, Albert, Jr., Sophia, Ezra. Currently, the family resides in St. Louis. Remarkably, their daughter Isabella is diagnosed with Down syndrome – that’s why Pujols’ family is a fierce supporter of people with this disease.

Once in an interview, journalists asked Pujols about his life preferences. The reporters were interested what was more important for the sportsman – his family or his career. Albert answered that there was no thing in his entire life which would ever become more crucial for him than his family. So, as the player suffered from his dad’s alcoholism in childhood, he has promised himself his kids would never see such horrible scenes at their home.

Even though sport takes much time, Albert and his family are not strangers to business. So, in 2006 Albert alongside the Hanon family founded a restaurant initially named Pujols 5 Westport Grill. In front of the restaurant, there is a statue of the sportsman. When Pujols was transmitted to the Angels, he changed the restaurant’s name to St. Louis Sports Hall of Fame Grill.

In 2005 the Pujols Family Foundation was formed. This charitable organization is aimed to promote awareness of Down syndrome and to help people having the diagnosis. As part of promoting awareness of the syndrome, the foundation arranges annual thematic events. Pujols, alongside his colleagues, have traveled to his motherland, the Dominican Republic, where the poverty level is high, to help people in need. They’ve contributed to local healthcare opening free hospitals.