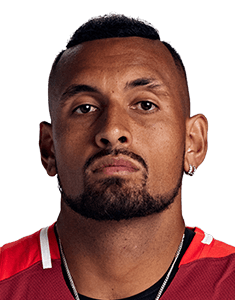 Nick Kyrgios is a professional tennis player from Australia who has made a name for himself in the sport with his aggressive playing style and charismatic personality. He made his professional debut in 2013 and has since become one of the most exciting and unpredictable players on the ATP Tour.

Nick was born on April 27, 1995 in Canberra, Australia in the family of the house painter George and computer engineer Norlaila. Nick has an elder sister called Halimah who works in musical and dance theater.

Nick studied at Radford College and later continued his education at Daramalan College in Canberra. As a teenager, Nick used to play basketball but later he decided to focus on tennis.

Kyrgios began playing tennis at a young age and started competing in local and national tournaments as a junior player and quickly made a name for himself as one of Australia's top prospects.

Nick quickly rose through the ranks, winning the Australian Open Boys' Singles title in 2013. He turned professional in 2013 and made his ATP Tour debut at the 2013 Brisbane International.

In 2015, Kyrgios reached the fourth round of the Australian Open, and reached his career-high ranking of No. 13 in October of that year. He also won his first ATP Tour title in 2016, winning the Marseille Open. In 2017, Kyrgios reached his second ATP Tour final, the Japan Open Tennis Championships, but lost the final to David Goffin.

Kyrgios has had a number of controversial moments throughout his career. He has been known to argue with officials, spectators and opponents and has received multiple fines for his behaviour. In 2019, Kyrgios received a 28-day ban for his behaviour during the Cincinnati Masters. Despite this Kyrgios has been able to maintain a reputation as one of the most exciting and entertaining players on the ATP Tour, with many fans tuning in to watch him play.

Kyrgios' career so far has been marked by a lot of ups and downs, but his talent and potential have never been in question. He has a big serve and a powerful forehand, and is known for his ability to come up with big shots in important moments. He's also known for his ability to play well on different surfaces, which has helped him to have a successful career so far. While Kyrgios has had a lot of success in his career, he has also had a lot of setbacks, whether it's been injuries, or controversies, but he has always been able to bounce back and continue playing at a high level.

Overall, Nick Kyrgios is one of the most exciting and talented players on the ATP Tour. Despite the controversies and setbacks, he has had a successful career so far, and it will be interesting to see how he continues to perform in the future. His aggressive playing style, big serve and powerful forehand make him a player to watch on the tour.

Off the court, Kyrgios has been known for his charismatic and sometimes controversial personality. He has been involved in several on-court incidents and has been fined multiple times for his behavior. Despite this, he has also been praised for his humility and sportsmanship, and he has been involved in various charitable causes.

Kyrgios has also been involved in a number of charitable efforts throughout his career, including the Nick Kyrgios Foundation which focuses on creating opportunities for children and young people, especially those from disadvantaged backgrounds.

It is important to note that Kyrgios is a private person, and has not publicly confirmed any of his relationships. One of his most well-known girlfriends was Croatian-Australian tennis player Ajla Tomljanovic. The two had been dating since 2015 but confirmed their break up in 2018.

Kyrgios has also been linked to fellow Australian tennis player, Ash Barty. Rumours of a romantic relationship between the two began circulating in early 2019, but the two have never publicly confirmed or denied the relationship.

Another woman Kyrgios has been linked to is Brazilian model and actress, Gabriela Barros. The two were spotted together at a basketball game in February 2019, leading to speculation about their relationship. However, again there was no confirmation from either party.

In 2019, Kyrgios was linked to Australian model and influencer Anna Kalinskaya. The couple were spotted together on several occasions and were believed to be dating, but it is unclear if they are still together.

In 2020, Kyrgios was rumored to be dating fellow tennis player, Canadian Bianca Andreescu. The two have been spotted together on several occasions and have frequently been seen on social media hanging out and training.

At present, Nick is dating Costeen Hatzi. They have been together since late 2021.Costeen is a Sydney based social media influencer who makes amazing lifestyle, beauty and fashion content.