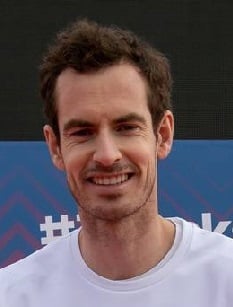 Sir Andrew Barron Murray is a British professional tennis player from Scotland, holding the 214th place in men's singles and 148 in men's doubles as of June 2019.

Having come to sport, Murray has reached high results. What helped him become one of the best tennis players of today worldwide? Let’s know!

Andy Murray’s birthplace is Glasgow, Scotland – he was born on May 15, 1987, to the family of Judy (née Erskine) and William Murray. When he was a baby, his family moved to Dunblane, central Scotland. Andy has an elder brother Jamie. Their mother was a competitive tennis player and a coach; she transmitted her love for the sport to the boys. When Andy was 5, he took part in his first competitive tournament. At the age of 8, Murray was competing with adults.

In 1996 he became a witness of a horrible accident - an armed person, Thomas Hamilton, entered the ‘Dunblane Primary School’ and shot 16 students and a teacher and then shot himself. Andy managed to hide in a classroom and stayed alive.

At the age of 10, Andy Murray got through his parents’ divorce. He stayed with his mother. When he was 12, he moved to Barcelona, Spain to train on clay court. There the sportsman attended ‘Schiller International School’ and trained under Coach Pato Alvarez at ‘Sanchez-Casal Academy.’

Interestingly, before emerging into tennis, Murray was interested in football. He was even offered to join ‘Ranger Football Club’ but turn down the invitation to focus more on tennis.

In 1999, Andy Murray became a winner of a major youth championship ‘Florida Orange Bowl.’ In 2004 he got the ‘US Open Junior Title’ and was named ‘World’s No. 1 Junior.’ Besides, he was honored ‘BBC’s Young Sports Personality of the Year.’

When he was 17, Murray was the youngest player to represent Great Britain in ‘Davis Cup.’

2007 was marked by Andy Murray’s victories of ‘SAP Open’ and ‘St. Petersburg Open’. He also advanced to the finals of 2008 ‘US Open,’ having beaten Spanish champion, Rafael Nadal. However, in the finals, he lost to Federer.

In April 2007 he reached the ‘Top 10’ and then ‘Top 4’ in 2009. In the span between 2008 and 2012, he took part in 4 Grand Slam finals and lost them all. In 2012, Murray appointed eight times ‘Grand Slam’ champion Ivan Lendl as his coach and their teamwork brought some positive outcomes. Though Murray was beaten by Roger Federer in 2012 ‘Wimbledon’ finals, he won Federer in August 2012 at ‘London Olympic Games’ to claim the ‘Men’s Singles Gold Medal.’

Andy failed to win the ‘Australian Open’ – his opposer Djokovic happened to be stronger. In July of the same year, he received ‘Men’s Singles Title’ at ‘Wimbledon,’ having beaten Novak Djokovic – it was Murray’s revenge.

In 2013 Andy was defeated in the 2013 ‘US Open’ quarterfinals. He also took part in the ‘Davis Cup,’ got injured and had to undergo surgery.

March 2015 brought the sportsman his 500th career victory at ‘Miami Open.’ He reached his 4th ‘Australian Open’ finals but couldn’t win the title. He was defeated by Djokovic in the 2015 ‘French Open’. Later he advanced to the ‘Wimbledon’ semifinals but lost Federer. He couldn’t make it to the ‘US Open’ finals and thus didn’t claim any major title in 2015.

At the beginning of 2018, the sportsman underwent hip surgery at Melbourne, Australia. He hoped to return to the game by March, but in an interview in April 2018, he shared his coming back would not happen soon. A reconditioning specialist who has worked with Tiger Woods, Jonny Wilkinson and several high-profile footballers helped Murray be on the mend.

The same year, while performing at Wimbledon, Murray worked as a sports commentator.

In 2019, Murray plays at the Virgin Money London Marathon.

Andy Murray’s net worth is evaluated at $100 million. His earnings per year are approximately $30 million. With such a big salary, Murray is included in the list of the richest tennis players.

Murray got acquainted with Kim Sears, daughter of player and coach Nigel Sears in 2005. They tied the knot on April 11, 2015, at ‘Dunblane Cathedral.’ They have welcomed their daughter Sophia, and nowadays reside together in Oxshott, Surrey.

Andy Murray supports the ‘World Wildlife Fund.’ Besides, he has joined ‘Malaria No More UK’ and plays charity tournaments for fund-raising.

From his birth, Andy Murray has had bipartite patella - his kneecap bones are not fused, but are two separate bones.

Andy Murray has joined the Malaria No More UK Leadership Council and helped launch the charity in 2009 with David Beckham. Murray has also attended several charity tennis events, including the Rally for Relief events that took place before the start of the 2011 Australian Open.

In June 2014, after the death of Elena Baltacha due to liver cancer, Murray featured in an event known as 'Rally for Bally'. The event raised money for the Royal Marsden Cancer Charity and the Elena Baltacha Academy of Tennis. Children from Baltacha's academy took to the court to play alongside Murray. Subsequently, Murray was awarded the Arthur Ashe Humanitarian of the Year award for 2014.