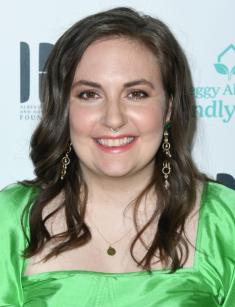 Lena Dunham is an American actress, filmmaker, and author. Her success came after the release of her film Tiny Furniture (2010), for which she received an Independent Spirit Award for Best First Screenplay. Her other famous project was the series Girls which she both created and starred in.

Lena Dunham was born in New York in 1986. Her family is very creative: the father, Carroll Dunham, is a painter, and mother, Laurie Simmons, is a photographer. Meeting mother's and father's friends who also were artists, of course, had an impact on their young girl. Lena is not the only child; she also has a younger sister, Grace, who appeared in Lena's two debut movies, Creative Nonfiction (2009) and Tiny Furniture (2010). In one of her interviews, Dunham speaks about feeling Jewish culture inside because Laurie is Jewish while Carroll, by the way, has English descent.

When Dunham attended Saint Ann's School in Brooklyn, she met there Jemima Kirke, a future actress who would play with Lena in the series Girls (2012–2017). Between school and college, Lena also went to The New School, a private university, where she has studied for a year. In 2008, Dunham graduated from the Oberlin College and received a degree in creative writing.

In childhood, Lena got a diagnosis of obsessive-compulsive disorder, and she still takes a small dose of antidepressant.

It can be said that Dunham's career started when she was at college. During that time, she has been producing some short films and uploading them on YouTube. One of the main topics of these films was sexual enlightenment. In 2006, she created Pressure, where friends discussed their first orgasm. In 2007, Lena uploaded on YouTube The Fountain, in which she was shown brushing her teeth in bikini at her college. This work led to lots of negative comments, and the young filmmaker decided to remove this video.

After this, Dunham started acting, for instance, in 2007, she appeared in the web series Tight Shots. Two years later, her comedy film Creative Nonfiction premiered at the South by Southwest Festival in Texas.

In 2010, Dunham's career breakthrough took place when she released her film Tiny Furniture, which was partly autobiographic. Lena played the leading role of Aura, her sister Grace played her on-screen sister, and her mother played the role of mom. After this success, Lena got a script deal at HBO.

In 2011, HBO approved Lena's new TV series, Girls. In 2012, at the South by Southwest Festival, three episodes were shown and got a positive review. The central role is played by Dunham again, and this character, Hannah Horvath, is based on the creator's life experience. Among other actors were Adam Driver, Donald Glover, Allison Williams. After the first season's premiere on HBO on April 2012, Girls received critical acclaim.

In 2015, Dunham announced that the sixth season of Girls would be the last one, and that was confirmed by HBO. The final season ended on April 2017.

In 2016, Lena starred in My Art, a film created by her mother. Its premiere took place at the 73rd Venice International Film Festival. Next year, the actress played Valerie Solanas in the famous series American Horror Story: Cult. Lena's character was the real-life feminist who tried to kill Andy Warhol in the 1960s. Also, since that year, Dunham has been writing her second book.

In 2018, it was announced that Lena would work as a writer for Camping together with Jenni Konner. After Camping's premiere, it received controversial reviews, mostly negative. In 2019, a new Quentin Tarantino's movie, Once Upon a Time in Hollywood, was released, and Dunham played the role of Catherine Share.

For 2019, Lena Dunham has a net worth of ‎$12 million. Besides filming and acting, she also writes. In autumn 2012, the actress signed a $3.5 million book deal with Random House Publishing. Lena's book was titled Not That Kind of Girl, and it was published on September 2014. It took the second place on The New York Times Best Seller list in October that year.

Speaking about Dunham's dating history, her latest relationship was with Jack Antonoff, a musician. They have been dating for five years, from 2012 till 2017, and actually, everybody thought that Jack already was her fiancé. However, the couple split up and remained friends.

Lately, at the Once Upon A Time in Hollywood's premiere in London, Dunham made a strange move while trying to kiss the actor Brad Pitt with an open mouth. Their photo went viral rather soon and caused a lot of comments; most of them called this inappropriate. However, Dunham is not dating Brad Pitt; that's a fact.

Besides taking antidepressants, which we mentioned before, the actress had another health issue. At the age of 31, Dunham had a hysterectomy, surgical removal of the uterus, due to the disease, endometriosis. In 2018, Lena wrote an essay for Vogue. In her article, she described her experience with this challenging decision.

In 2012, Lena appeared in a video promoting Barack Obama's re-election. The most noticeable and controversial part of this project was Dunham's words when she compared "voting for the first time to having sex for the first time." Someone called this inappropriate, but the actress answered on her Twitter page that her monologue could be funny and light, but her message was very serious. Lena is a feminist, and she urged to vote for women's rights.

In spring 2016, Dunham supported Hillary Clinton and promised to move to Canada in case Donald Trump wins. After his win, Lena posted on her Instagram page that she would not move and she better would fight for her country.

Dunham has been nominated for 20 various awards and has won five of them, including Golden Globe Awards for the Girls. Besides, in 2013, Lena tuned out to be the first woman who won a Directors Guild of America Award for Outstanding Directing in Comedy Series for her work on Girls.