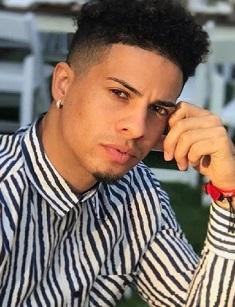 Austin McBroom was born in Los Angeles, California, the U.S. His parents are Michale and Allen. His father, Michale McBroom, is divorced with his mother and is married to his second wife. He works as an operations director at a non-profit camp for kids with serious health disorders.

Austin has a younger brother named Landon, who is also an American social-media personality. Austin posted a cute photo collage on his Twitter profile of him, Landon and their mother depicting the difference between them in childhood and now.

Austin McBroom studied at Campbell Hall School, California and finished his education in 2011. The young boy was engaged in three different sports: basketball, baseball, and football. In his senior year in high school, he was named in the All-State selection in both basketball and football.

For his college education, Austin initially entered the Central Michigan University. However, after his freshman year, he moved to Saint Louis University for his sophomore and junior years. McBroom eventually completed his senior year of college at Eastern Washington University.

Mcbroom's sports career started at Campbell Hall Scholl. He was playing in the point guard position. After graduating in 2011, he spent one season playing with the Central Michigan Chippewas basketball team. He showed good results and earned a place on the Mid-American Conference All-Freshmen Team.

Austin McBroom became a famous professional basketball player, but he also succeeded in a social-media promotion. Initially, he shared his music videos on the Internet and later turned it to full-time vlogging. At present, he owns the YouTube channel called The ACE Family, together with his girlfriend Catherine Paiz. The couple posts videos about their everyday life, gaining millions of viewers. The channel also contains Q&A videos, vines, pranks, and challenges.

Some of their most popular videos are The Ace Family Official Baby Gender Reveal, The Ace Family Charity Basketball Event, and Epic Car Accident Prank. The video of Austin’s proposal to Catherine, The Best Proposal of All Time collected over 19 million views.

Austin is equally popular on Instagram. He has over six million followers on his profile, where he mainly shares family photos and videos.

Austin has a big fanbase all over the world. His followers made a video about Austin called From Baby to Father with photos of McBroom from time he was little till the present time when he is a family guy.

In addition to his flourishing career as a Youtuber, Austin Mcbroom has also launched a website for the sale of diverse kinds of merchandise.

The net worth of a popular basketball player and blogger is estimated at $6 million.

Austin McBroom is known to be in a long-term relationship with Catherine Paiz. Catherine is a fitness model and fellow social media star, who was born in Canada. Before Catherine, Austin was dating Jasmine Villegas, American pop and R&B singer, and Melissa Ochoa.

The relationship of Austin McBroom and Catherine Paiz began in 2015. They are also career partners as they collaborate on their Youtube channel The ACE Family. The duo is an excellent example of a happy and prosperous family. Many followers dream of having ideal relationships, as the couple has.

There was gossip about Austin's infidelity spread by Alissa Violet, an actress and Internet celebrity. She posted a video with Austin during the music festival Coachella. But in the video, the basketball player was just sitting in the back seat of the car, so there could be no accusations of betrayal here.

Austin and Catherine welcomed their first child on May 28, 2016, a daughter named Elle Lively McBroom. Elle gained popularity even before her birth. As a baby, she is becoming increasingly popular, having over 3.6 million followers on her own Instagram profile.

The couple got engaged in August 2017. In October 2018, Catherine gave birth to Alai, their second daughter. Kylie Jenner, the close friend of the family, took part in the gender reveal of their second baby. She organized the countdown to the couple, standing with confetti poppers.

Austin devotes many Instagram posts to his fiancée. As he says, Catherine is an embodiment of beauty for him. He is proud to have her as a girlfriend and mother of his kids. They have many joint photos. On one of them, the family is sitting together with braids hairstyles, which looks so sweet.

The duo often goes for sports games together. At Lakers Game, Austin was captured in several pictures standing on the background and shouting. These funny photos were spread on the Internet and became an Internet meme.

The family is actively involved in charity. In June 2018, they held their charity basketball tournament featuring YouTubers and celebrities. The two teams were competing for the victory: Ace's team against Ricegum's team, an American YouTube personality and musician. In 2019, the Ace Family organizes charity event that is going to be held at the end of June, at L.A.’s Staples Center. The show will feature Austin McBroom going one-on-one with Chris Brown, the famous R&B singer.