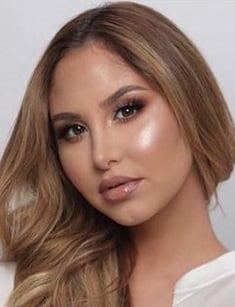 Dolores Catherine Johnston Paiz is a French-Canadian fitness model, actress, and social media star. She has a popular YouTube channel, "The ACE Family," which is run by Catherine and her fiancé and counts more than 16 million subscribers.

Catherine Paiz was born in 1990 in Canada. She has siblings: two younger brothers, Ryan Paiz and Josh Paiz, and also a younger sister, Valentina Paiz. Catherine’s parents were in divorce and lived separately, so the most of her early and teen years she has been living in Canada with the father, and then Paiz moved to the United States to her mother's house. The model lived here till entering St. Louis College, where she was interested in sports like her future fiancé, Austin McBroom.

She played hockey, soccer, volleyball, and also did swimming. After that, the model relocated to Los Angeles, California, to look for more modeling and acting opportunities.

After moving to U. S., Catherine launched modeling there but did not take it too seriously. However, she was very lucky to start her modeling career from the deal with the famous brand, Victoria’s Secret. Then, she participated in Azzelia swimsuit show.

Also, at a young age, Paiz started working with her Instagram and YouTube accounts, and soon she became rather popular. For now, she has almost 7 million followers on Instagram. Besides, she and her fiancé own a YouTube channel called The ACE Family, where they broadcast some exciting moments of their family life, and it counts more than 16 million subscribers. There we find out about Catherine’s makeup tutorial in the car while Austin is driving, her working out in a gym, and some news about moving to a new house. Well, the pair shares a lot with their fans! By the way, a lot of YouTubers started their career from the platform named Vine, but Paiz is not one of these people.

Speaking about another social media network, Twitter, Catherine often speaks her mind here. For instance, when one of her followers tweeted her that real Christmas trees were better for the environment and also attached the link to the Huffington Post, a news and opinion website, Paiz just laughed at this person and answered with “can’t believe everything you read on the internet “huffingtonpost” lol."

Catherine has a net worth of approximately $2 million, which she gets from her modeling career and advertisement on the Instagram account.

Since 2015, Paiz has been dating Austin McBroom, a basketball player. Their ways already crossed earlier, when both studied at the St. Louis College. However, they started dating in a few years, after meeting again at the party. On May 28, 2016, their first kid, Elle Lively McBroom, was born. By the way, before Elle, the pair did not plan any pregnancy yet, although, it made both Paiz and McBroom very happy. The child already has her own Instagram account, which counts almost 5 million followers, and it is run by her parents.

In August 2017, Austin proposed to Catherine with a beautiful wedding ring worth, well, a lot, because it has 6 carats! What is the sweetest part about the proposal is that McBroom also gave their daughter, Elle, a beautiful diamond ring as a promise to be the best father he could be.

In February 2018, Catherine posted some pictures from her romantic photo shoot, where her neat belly was seen. That year, on October 17, the second daughter was born and got the name Alaïa Marie McBroom. Alaïa also has her own page on Instagram, which counts more than 2 million followers.

Speaking about Catherine's ex-boyfriends, she had only been dating an actor Michael B. Jordan in 2014. Of course, she does not communicate with her ex now. Besides, there was Keith Powers, also a model, but there is no confirmed information whether they used to be just friends or more than that.

In 2013, Catherine Paiz revealed her secret of getting a breast augmentation and said that she had done it in 2010 and did not regret it. In 2018, she posted on Twitter that she had done surgery on her gums due to the horizontal impactions under it, which caused a lot of pain.