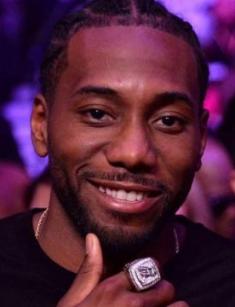 The American professional basketball player, small forward Kawhi Leonard, plays for the Los Angeles Clippers team who competes in the National Basketball Association. His strongest points are steals and great shots, which he often uses during games and thus leads the team to victory.

The future athlete was born in the American city of Riverside, California, in the summer of 1991. He became the fifth child in the family and the first boy. His father Mike Leonard owned a car wash, where Kawhi sometimes worked part-time. In 2008, the man was killed at his car wash.

In his hometown, Kawhi graduated from a public school and then began to play basketball. In high school, he and his friend Tony Snell led the local team to victory 30 times, while they had only three defeats. Even then, the coach said that Leonard could become a real star.

The talented basketball player became famous far beyond the school, and the University of Marquette and Memphis became interested in him. The Pac-10 coaches also called the player. After graduation, Kawhi entered San Diego State University and immediately became a member of the Aztecs, the university basketball team. For two years, the young man played in 70 matches, and each time showed excellent results.

In 2011, the Indiana Pacers Club selected Leonard with the 15th overall pick in the NBA draft. At the same time, the San Antoni Spurs sent George Hill, who had just begun to show good results, to Indiana in exchange for Kawhi. In December of the same year, the striker signed a multi-year deal with the Spurs when the NBA lockout ended.

At that time, sports fans did not know Leonard, who began his path to recognition in 2012. He was promoted to the starting lineup after shooting guard Manu Ginóbili broke his arm and could not play for a while. Then he was chosen for the NBA All-Rookie First Team, but the athlete could not play because of the calf muscle sprain.

He was promoted to the starting small forward position after Richard Jefferson was exchanged for Stephen Jackson to the Golden State Warriors. Kawhi placed fourth in the NBA Rookie of the Year voting.

In the offseason, Leonard participated in the USA men's basketball Select Team, where he had the opportunity to train with the Olympic men's team. In the spring of 2012, he was injured again and underwent medical treatment for a month. Nevertheless, the Spurs extended the contract with the basketball player.

For the first time, Leonard joined the NBA All-Defensive Second Team in 2014, and in 2015, following the results of the regular season, he was named the NBA Defensive Player of the Year. One year later, he was selected as a starter for the All-Star Game. From 2018 to 2019, Kawhi played for the Canadian Toronto Raptors team.

The personal life of the basketball player is successful, and he met his future wife, Kishele Shipley, at San Diego State University. Before they got married, the young people had dated for a long time.

The wife gave birth to the first child, a daughter, in 2016, and in 2019 they had the second baby. There is no information on the Internet about the other children of Leonard.

There are a few photos on Kawhi’s Twitter page as compared with the man’s Instagram fan page. They regularly post pictures of the games, as well as shots of family and friends.

Even now, the basketball player shows excellent results in sports. In February 2019, the forward officially presented the New Balance sneakers; the athlete wore shoes during the NBA All-Star Game.

The same year, Kawhi was voted NBA's best player in ESPN coaches poll, and the Los Angeles Clippers club signed a deal with him. According to unofficial data, the 4-year contract had a value of $142 million. He joined the new team, alongside Paul George.