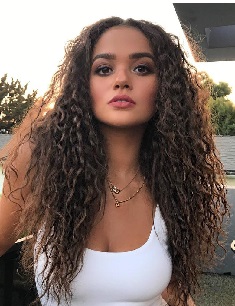 The Texas native, Madison Pettis started her acting and modeling career at the age of five. Since then she became a famous actress and won great fanbase. Madison is best known for her role with the Disney Channel’s Cory in the House or her time as Dwayne “The Rock” Johnson’s daughter in The Game Plan.

Madison has two older siblings. In 2016, young actress began dating basketball star Michael Porter Jr. According to Forbes, her net worth is roughly estimated at $500,000, including all of her earnings from acting, modeling, and endorsements.

Madison’s birthplace is Arlington. She was born in a family of Steven and Michelle. Her dad and mom are a mixed-race couple. Madison appeared on July 22, 1998. Apart from Madison, there were two other children in their family, a boy Steven and a girl Antoinette Mia. Madison decided to follow in the footsteps of her sister and began acting when she was just five years old.

In 2003 Michelle entered Madison in the modeling world. They visited FortWorthChild magazine’s casting. It was an award-winning free monthly parenting magazine that addressed the concerns and needs of families, with a special focus on children from prenatal through adolescence. They were looking for a kid for their cover. Madison took that place.

The photographer was so impressed with the young girl that she put Michelle in touch with a modeling agency in Dallas, which led to modeling jobs and eventually commercials for Madison. Their agent offered them to put Madison in some acting classes to see if she liked it. Madison loved that idea and started from a children's acting studio in Coppell, attending weekly classes for six months.

On her first audition, Madison won a spot in a national Hasbro Toys commercial. That led to other commercials and a spot on Barney and Friends. Madison studied at the Bebensee Elementary School. Soon she had her own teacher and classroom on set. She acted for up to five hours a day, had three hours of schooling, and took a 30-minute lunch. She spent her evenings memorizing her lines and doing schoolwork.

Madison got her big break with her first movie at eight years old playing the daughter of Dwayne "The Rock" Johnson in Disney's hit family comedy, The Game Plan. At nearly the same time as filming started on The Game Plan, Madison was cast on a new Disney Channel show, Cory in the House, where she played Sophie Martinez. The show premiered on January 12, 2007. Madison and her mom were in Los Angeles filming Cory in the House in the summer and then spent the fall in Boston filming The Game Plan.

On the movie’s set, there happened the funniest thing of Madison’s career. There was a sad scene where her father Dwayne was serenading her with his guitar. She was supposed to be crying and sad. Right in the middle of that scene, the set team decided girl really had to go to the bathroom. So she yelled she needed to go to the bathroom. Everyone laughed. It was cute because Madison was very young.

In 2008 Madison filmed in the Gabriele Muccino’s movie Seven Pounds, staring with Will Smith. Next year, she started voice acting work. At first, she voiced Adyson in Phineas and Ferb. In 2011 – 2015 Madison gave her voice to Izzy in animated TV series Jake and the Never Land Pirates.

In April 2009, Pettis traveled to Hawaii and participated in her first USO tour. The young star visited seven military schools and delivered inspirational messages to more than 800 military children. Madison’s older brother Steven served in the U.S. Army then. After her tour, she said:

“I had such a good time on my first USO tour; I knew I had to do it again. My brother is in the Army, so I know what it’s like to have family in the military. It’s hard not being able to see the people you love every day and I’m just glad I can help.”

In December 2009, the young star visited The Bonnie Hunt Show, where she was surprised by a reunion with her brother, who had been deployed to Iraq for most of the year. In January 2010 Madison was heading to Germany on her second USO tour. As part of her four-day trip, Pettis visited elementary and middle schools, where she connected with military school children, took part in school activities and signed autographs.

During 2011 – 2016, Madison filmed in such movies as YTV’s Life with Boys, Freeform’s The Fosters, Mostly Ghostly: Have You Met My Ghoulfriend? and Do You Believe?. In November 2016, nearly ten years after Disney’s The Game Plan debuted in theaters, Dwayne “The Rock” Johnson and Madison Pettis reunited for a different Disney movie. They met up at the premiere of Moana in California.

In 2017 Facebook Watch announced the release of teen drama Five Points, where Madison Pettis and Hayley Kiyoko received the series' lead female roles. On May 16, 2018, the first official trailer for the series was released. Pettis performed flawless Natasha “Tosh” Bennett.

In July 2019 Hayley Kiyoko blessed the fans with her brand new single and video for “I Wish” Madison stared in it along with other famous actresses.

Madison was a popular girl from an early age. In 2009 – 2016 she was dating with Jaden Smith, and Kalin White, and even was rumored to have relationships with Cameron Boyce. In 2016 Pettis met Michael Porter Jr. He confirmed their relationship in 2017 at media day before the McDonald’s All-American game in Chicago.

“Me and her had talked a little bit,” he said. “We started following each other on Instagram. One day, I saw she commented happy birthday on one of my pictures. She’s been a kind of a crush of mine for a minute, and I had to slide her some DMs. I just said ‘What’s Up’ and somehow she saw it and replied, and the rest is history.”

The actress tries her best to live a healthy lifestyle. Despite her young age, she understands the importance of eating healthy to maintain her health, so she keeps her own diet. On the other hand, her on-the-go lifestyle sometimes makes her go for convenient foods, mostly processed ones. But the good thing about her is that she tries to balance it out by making up for it the following day.

Madison is rather active on her Instagram. Her curly hair is an integral part of her image. Whether she is in a bathing suit or in the clothes, Madison is the object of adoration of many fans.