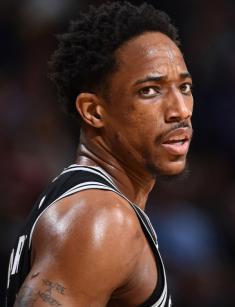 DeMar DeRozan is a professional basketball player. At present, the sportsman plays for the San Antonio Spurs of the NBA. His career began after he joined the team Toronto Raptors in 2009. DeMar has received many awards during his sports career and has big plans for the future.

The sportsman was born in Compton, California. His mother, Diane DeRozan, had a disease called lupus, that is why DeMar, when he started playing in the NBA, made efforts to help in solving this problem. Sometimes, he missed games to stay with his mother. DeMar partnered with organizations in order to find new ways of curing the disease.

In his early life, DeRozan got an education at Compton High School. DeMar started playing basketball and joined the team in which he performed four years.

DeMar contributed to the high scores of his team, leading the Compton High School to a record. His achievements made him one of the best players. He got the Moore League Most Valuable Player Award. In 2008, DeMar joined the McDonald's All-American Team and became a winner of the competition. He also showed excellent results while studying in college. DeMar had all the chances to become a famous basketball player.

In 2007, the sportsman signed a letter of intent to play in the college basketball team USC. In his first game for the Trojans, DeMar performed in an exhibition game against Azusa Pacific. He also played in his first career regular-season game. The team became a winner over UC Irvine. DeMar took part in the Pac-10 Tournament semifinals, and the team won over Arizona State in the Pac-10 Tournament final.

The sportsman was awarded honors for his high scores. He started all 35 season games for the Trojans. During his college years, he based a good foundation for his further success in basketball.

The player's career started in 2009 when DeMar was offered to play for the team Toronto Raptors. He has spent nine years with a team, showing fantastic results in matches. In 2018, DeMar entered the team San Antonio Spurs in which he performs till the present time. The sportsman is the owner of numerous awards, which he got for his talents and professional skills.

In April 2009, DeRozan announced his decision to enter the 2009 NBA draft. In July, the player signed his rookie scale contract with the Raptors. After performing in several matches, the sportsman was selected to compete for the 2011 Sprite Slam Dunk Competition.

The player performed in games against the Houston Rockets and the Dallas Mavericks, gaining high points. As a result, DeRozan was selected for the 2014 NBA All-Star Game as a reserve guard for the Eastern Conference All-Star team. In March, he led the Raptors to a playoff berth for the first time since 2008, with a victory over the Boston Celtics.

The 2013–2014 season was a breakout year for the sportsman, as he led the Raptors to a 48–34 record and a third-seed finish in the Eastern Conference, according to Basketball Reference.

In November 2014, the player had missed games because of the injury he sustained in the game against the Dallas Mavericks. DeMar returned back to sports in January 2015. He was in perfect shape and appeared in a win over the Philadelphia 76ers and in a victory over the Houston Rockets.

In 2015, the sportsman was named Eastern Conference Player of the Week for games played in December. After seven years of playing, he earned the honor for the first time.

After the win over the Washington Wizards, DeMar was named an Eastern Conference All-Star reserve for the 2016 NBA All-Star Game. In February, the sportsman, along with his teammate Kyle Lowry helped the Raptors to reach high results and they recorded a franchise-record 11-game win streak. After that DeMar was named the winningest player in Raptors’ history, as he helped the Raptors defeat the New York Knicks. In July 2016, DeMar, previously with the Toronto Raptors, became a free agent.

The same month, the sportsman re-signed with the Raptors to a five-year contract and performed in a win over the Detroit Pistons. In December, he became Toronto's career scoring leader. After taking part in a win over the Boston Celtics, DeMar was named a starter on the Eastern Conference All-Star team for the 2017 NBA All-Star Game.

In February 2017, the player suffered an injury and after missing seven of the team's previous eight games, performed in a win over the Los Angeles Clippers. DeRozan finished the season with a career-high 2,020 points, while his 27.3 average marked the second-highest in franchise history. In May 2017, he was named in the All-NBA Third Team for the first time in his career.

In January 2018, the player became the third player in Raptors history to score 50 or more in a single game, after winning the Milwaukee Bucks. Then, he was chosen as an NBA All-Star starter for the second consecutive season, marking his fourth overall selection to the game. In February, DeMar was named Eastern Conference Player of the Month for January.

For the season, DeRozan was named to the All-NBA Second Team. He finished the 2017–2018 season as the franchise leader in a number of categories.

In July 2018, DeMar was traded to the San Antonio Spurs in exchange for Kawhi Leonard and Danny Green. In his debut for the Spurs in their season opener, he contributed to a win over the Minnesota Timberwolves.

In October, he performed in a win over the Los Angeles Lakers and the Dallas Mavericks. With 18 points against the Houston Rockets, the sportsman became the first San Antonio player to score in double figures in each of his first 22 games since David Robinson did so as a rookie in 1989.

In January, DeMar recorded his first career triple-double in a win over his former team, the Toronto Raptors. In February, he played his first game in Toronto in a Spurs uniform.

Lately, there were discussions about how DeMar DeRozan’s lack of consistent effort on defense has created a chain reaction that has lead many players on the team to stop trying as they used to. There are rumors, that the Spurs would trade DeMar if he won’t play defense.

DeMar is married to Kiara Morrison. He and his wife have two daughters. The two have been together since college, over six years. DeRozan and Morrison met during his only season at the University of Southern California. The two were attracted to each other because of their shared passion for basketball. There were rumors that they broke up during the 2017–2018 season. Hopefully, the couple has saved their relationship.

The sportsman has an Instagram account with 2,5 million followers, but there is only one photo in his feed. He is more active on Twitter, where he has over 640,000 readers. He frequently posts news from his everyday and sports life there.

DeMar has a strong and dynamic personality. His height is 201 cm and the size of his shoes is eight.

It is known that the player suffers from depression. DeMar decided to speak about this problem in public because he realized the importance of raising this issue. He and fellow NBA player Kevin Love together highlighted the problem of mental health.

The net worth of the player is estimated at $23 million.