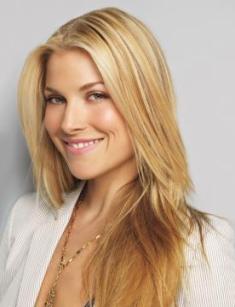 The actress was born in Cherry Hill, New Jersey, in the winter of 1976. Her father Danforth Larter was a trucking executive, and mother Margaret Larter was a housewife.

After graduation from high school, Ali decided to start a modeling career. When Larter was thirteen years old, a modeling scout discovered the girl on the street and offered to shoot in a Phillies commercial. A year later, Ali signed the first contract with Ford Modeling Agency in New York City. Thanks to this work, Larter began to travel around the world. She visited Japan, Australia, and other countries.

When she returned to Los Angeles, Ali enrolled in acting classes. The young woman decided to do it on the advice of her long-time friend, actress Amy Smart, whom Larter met when she worked as a model in Italy.

While working as a model, Ali Larter participated in an Esquire magazine hoax organized by journalist Martha Sherrill. In November 1994, the reporter wrote in the magazine that model Allegra Coleman (a fictional woman) had a close relationship with David Schwimmer, who played the leading role in the TV series Friends, and then with director Quentin Tarantino.

Revealing her plans for the near future, Allegra told about the contract with Woody Allen. Ali Larter portrayed the fictional model in the article. The situation amused the woman because even eminent Hollywood managers took the information seriously, became interested in Coleman, and were ready to cooperate with her.

Ali Larter began an acting career in 1997 when the young woman received offers to play in TV shows. Her first professional work was the bit part of Maddie in the TV series Suddenly Susan. Soon, Ali appeared in the series Just Shoot Me!, Chicago Hope, and Dawson's Creek.

In 1999, Larter starred in the drama Varsity Blues, in which her partners were friend Amy Smart and actor James Van Der Beek, with whom the woman had already worked in Dawson's Creek. The movie was a box office success, exceeding 2.5 times its production budget. During a year, the tall blonde with a cheerful smile appeared in two similar projects: teen comedies Drive Me Crazy and Giving It Up.

Ali played a different role in the horror movie House on Haunted Hill. The actress appeared as the participant of the night show, organized by entrepreneur Steven Price (Geoffrey Rush) at the long-abandoned hospital. But mystical things happen during the quest.

In 2000, viewers saw the horror film Final Destination, in which the actress played high school student Clear Rivers, the friend of the title character, Alex (Devon Sawa). The school team goes on a weekend trip to Paris, but Alex feels that something is wrong and discourages the classmates from flying by plane, which subsequently really explodes in the air. After the disaster, death begins to follow those who have survived. Alex and Clear’s schoolmates die one by one.

The success of the film contributed to the creation of the following movies of the franchise, later four more films were released, and the story inspired several comics and horror novels. But Ali Larter appeared only in the first and second installments. For a leading role, Ali received the Young Hollywood Award. At the same time, the actress first appeared on the theatre stage in a provocative play The Vagina Monologues in New York City.

The following year, the woman appeared in Legally Blonde, starring Reese Witherspoon. The comedy grossed $140 million at the box-office and won many prestigious awards, including the Teen Choice Awards and MTV Movie Awards. Ali soon appeared in two more films: the crime western American Outlaws and the comedy Jay and Silent Bob Strike Back. In 2004, the actress starred in the thriller Three Way with Dominic Purcell.

A year later, the actress appeared in the light comedy A Lot Like Love about a chance encounter that turns into love. In the thriller Confess, the woman plays one of the victims of the hacker, who beats confessions out of people using a gun and then posts them on the Internet.

Another notable project of that time was the TV series Heroes, in which Ali Larter got the secondary role of Niki Sanders, a woman with the superpower. The series became high-rated and was later bought by television broadcast stations in 25 countries. The creators of the favorite TV show received several prestigious awards. Ali Larter was nominated for a Saturn Award.

In 2007, the actress starred in the Bollywood project, the comedy Marigold. Ali’s heroine, Marigold, is an American actress who arrives in India to participate in the filming of an international project. But the young woman loses luggage and then finds out that the producer of the film has been arrested on suspicion of fraud. While staying in a strange country without money, the blonde meets an Indian actor named Prem (Salman Khan) and falls in love with him.

Another significant project in the actress’s career is the Resident Evil film series, in which Ali appeared as Claire Redfield. To prepare for the shooting, the woman had to dye her hair red. While working on the film, Ali Larter became a close friend of Hollywood star Milla Jovovich. The movie is based on the popular video game. The third installment, Resident Evil: Extinction, grossed $115 million at the box office. However, Resident Evil: Afterlife broke this record, grossing $ 300 million.

Ali Larter changed the positive character for the opposite one in the thriller Obsessed. Larter’s heroine Lisa Sheridan becomes obsessed with her work colleague Derek (Idris Elba), who remains faithful to his wife Sharon (Beyoncé). The most prominent films, in which Ali participated in the late 2000s, are the comedy Homo Erectus and the biographical drama Crazy.

In 2014, the actress played Crystal in the TV series Legends and got a bit part in the drama You're Not You. A year later, the actress's filmography included the leading role in the horror film The Diabolical.

Ali Larter is married to actor, stand-up comedian, and screenwriter Hayes MacArthur. The young people met on the set of the film Homo Erectus. It took them five years to clarify their feelings and marry.

MacArthur and Larter raise two children: a son, Theodore Hayes, and a daughter, Vivienne Margaret. The actress has a stable personal life without scandals.

Ali Larter is keen on cooking, and the actress has a blog about tasty and healthy food on her official website. The woman posts some recipes with photos on Instagram.

Resident Evil: The Final Chapter, the sixth installment, has recently been released, in which Ali Larter portrayed Claire Redfield, Alice’s (Milla Jovovich) ally, again. The women managed to survive a destructive catastrophe and resist the enemies of humanity. In 2018, the actress does not plan to appear in new projects, but the rumors have it that the creators of the fantasy series UFO are negotiating with the actress for her participation in the project.

Ali Larter has a net worth of $8 million.