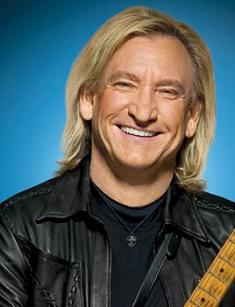 The Kansas native, Joseph Fidler Walsh is one of the most experienced musicians of our time. He was a member of five successful groups, was a solo musician, wrote and even produced songs. He is the top guitarist and was considered to be the 54th among 100 greatest of all time. He won five Grammys. He had five wives.

Joe Walsh’s net worth is an estimated $85 million.

Walsh is the native of Wichita. His birthday was on November 20, 1947. Giving birth to Joe, his mother, Dora Jay Newton, wanted to start a happy, calm life. However, two years later, her husband and Joe’s father died in a plane crash in Okinawa. He served in the military as a flight instructor for the Lockheed F-80 Shooting Star. Dora overcame that tragedy and met a suitable man, who adopted five-years-old Joe.

Joe spent his childhood in Columbus. Growing up, he tried to play musical instruments, as his mother was a pianist, and Joe always listened to music. He was involved in it. As a kid, he sang simple songs and made first trying of writing his own melodies. Joe had lessons on several instruments.

He chose the guitar. It was his first instrument that he could really express himself with. It was the best vehicle he had to get what has been inside his head out of it and into somebody’s ears. He was ten years old when he got his own instrument. It was a Silvertone acoustic. He ordered it from the catalog of the mail-order company Sears Roebuck. Its price was $30.

Joe was waiting for his guitar for three weeks. He was on top of the world when he received it in the mail. Although he couldn’t play anything, he loved the instrument at first sight. He began learning his first song. It was the Ventures’ song “Walk, Don’t Run”. Joe learned the rhythm part, the lead part, the bass part, and everything. He learned every note of that song.

Soon the family moved to Montclair, the state of New Jersey. Walsh entered its local high school. While studying, he started to listen to the Beatles. It was inspirational to him. He wanted to be like them and decided to become a professional musician. His first onstage experience was horrible. When Joe was 12, he and his friend, made a performance at a school assembly.

Joe played the guitar; his friend take a trumpet. The friends were absolutely petrified. Later he became more confident but always remembered his first experience. Soon he joined the local band the Nomads, where he became the bass player. After high school graduation, Joe attended KSU (Kent State University).

In 1965 he became the member of Kent students’ band The Measles, where he started to sing. They recorded two songs with his vocal. He played music more than studied and dropped the university out after one term.

Joe appeared as a professiiional musician three years later. Then he became James Gang’s member. On the way to Detroit, some members left the band. The remaining guys needed cash to return home. James Gang was forced to take the stage as a trio. Joe learned how to carry rhythm and to sing at the same time. He did great, poorly knowing the lyrics.

James Gang started to perform as a trio permanently. They rapidly won a large fan base, and signed a record deal, releasing a 1969 debut album “Yer’ Album”. The James Gang opened up for The Who on tour in Europe and had several minor hits. In 1971 Joe left the band. In 1975 Walsh joined the Eagles. He replaced Bernie Leadon. The Eagles released the album “Hotel California”.

It became a critical and commercial success which included many hit singles. Walsh’s guitar solo for “Hotel California” was selected the best guitar solo of all time by Guitarist magazine in 1998. His guitar work has been praised by Jimmy Page, Eric Clapton, and Pete Townshend. In 1977, the band, minus Don Felder, released “Little Criminals”. The Eagles broke up in 1980.

He has produced albums for Ringo Starr and Dan Fogelberg. He has appeared in The Blues Brothers movie, RoboCop, The Drew Carey Show, and MADtv. In 2017 the last two living members of The Beatles had come together for the first time in seven years to record a new studio album. Joe Walsh joined them.

Despite the James Gang’s growth, Joe found himself at a creative crossroads: the music he heard in his head no longer fit the trio format. In 1971he left the band with consecutive gold albums and moved to a former mining village to continue writing music with new players. A new record studio was built there.

In his typical style, Walsh found out about it. He organized recording there for free in exchange for finishing studio’s repair. In 1972 the debut album, titled “Barnstorm”, was issued. The second solo album got the name of “The Smoker You Drink, the Player You Get”. It became the most successful project of Walsh’s career. His former partners Don Henley, Glenn Frey, and Randy Meisner, contributed backing vocals on a few tracks.

Joe had a rich family life’s history. His first wife was Margie. They married soon after Joe’s dropping out. However, the young couple separated very soon. In 1971 Joe again tied the knot with Stefany Rhodes. The same year Stefany gave birth to their daughter Emma. Three years later, Emma died in a car accident. Joe grieved for tragedy. He even released some songs and albums in her honor.

Stefany and Joe broke up in 1978. He rapidly found a new wife, and in 1980 married Juanita Boyer. They lived together for eight years. Joe decided to take time out after her and tied the knot again only in 1999. His fourth wife’s name was Denise Driscoll. They led a family life until 2006. Currently, he is in relationships with in-law sister of Ringo Starr, Marjorie Bach. They married in 2008, and don’t have reasons to break up.

Joe had problems with drugs and alcohol in his early career. In 1993 he went to rehab. There were some mysterious cases in his life, which forced him to overcome his addiction. In New York City Walsh started interested in radio. He has a special license. At the station his callsign is WB6ACU. Joe Walsh’s net worth is an estimated $85 million. This fortune comes from the sale of his albums.

He has also appeared in many TV series and movies. In 2011 Joe Walsh was a guest on the web TV series Live From Daryl's House. He performed some of his great hit songs with Daryl Hall and his band. In 2015 Joe was music video director of Wicked City.

“You have to go out and play in front of people; even if you suck at it at first, you have to do it. For anybody going onstage the first time, it can be a terrifying experience, and it can be so scary that they never go again. But you have to do it a couple times before you can make your mind up”.

Sometimes Joe Walsh is confused with congressman and radio host Joe Walsh, who seriously discussed Mueller report in March 2019, held a meeting at Woodstock Square in 2011.