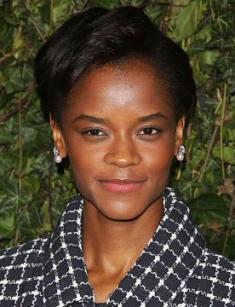 The young British actress Letitia Wright earned her fame for the role of Princess Shuri in the Marvel blockbuster Black Panther. The black girl from a suburban London area was notable for her talent and persistence and successfully built her career. In February 2018, she appeared at the BAFTA ceremony along with Duchess of Cambridge, Frances McDormand, and Angelina Jolie.

Letitia Michelle Wright was born on October 31, 1993, in Georgetown, Guyana. When the girl was seven, the family moved to Great Britain and settled in London. Today, Wright’s mother works as a teacher.

The would-be actress grew up in Tottenham, the melting pot for many cultures; she emphasizes in her interviews she will always be a North London girl.

The movie Akeelah and the Bee inspired the future star: the story of a black school girl who succeeds despite her criminal environment motivated Letitia to become an actress. 12-year-old Wright participated in a school drama club and played an African-American activist Rosa Parks. She mentioned this part in her resume.

At 16, Wright was strongly determined to become an actress who could tell wonderful stories. She had her picture taken and wrote letters to various agencies; besides, the young woman entered the Identity School of Acting in East London. Letitia’s persistence was fruitful: she got small offers to series and TV movies.

Screen International noticed the beginning actress in Sally El Hosaini’s My Brother the Devil; the magazine included her in the 2012 celebrity list. The drama Urban Hymn by Michael Caton-Jones brought the lead part. Wright’s character, the young singer Jamie Harrison, had much in common with the artist herself. Initially, a black girl was not supposed to take this part.

However, Letitia charmed Michael Caton-Jones who had worked with top stars: the master was just as amazed to see Wright’s magnetism and unique manner as he was astonished by 16-year-old Leonardo DiCaprio’s talent. Urban Hymn gave the actress the nomination for British Independent Film Awards – Promising Newcomer in 2016.

In2015-2017, the artist participated in episodes of fantastic series: iconic Doctor Who (“Face the Raven”) and Black Mirror (“Black Museum”). The latter project brought the first acknowledgment, and people recognized her in a subway. Letitia did not accept the role of Nish at once: the filming was scheduled for the same time as the series Humans.

The real fame came with the role of Shuri in Ryan Coogler’s Black Panther, the 18th movie in the Marvel cinematic universe. The majority of the cast was black, and it seemed somehow unusual; Wright hopes that such projects will become normal for the modern cinematography.

The 24-year-old actress looked natural as the 16-year-old teenage girl. The young Wakanda princess was not only the king’s assistant but also an inventor who created high-tech arms to protect her people. The actress marked that her character could help some young person find their life path.

Letitia Wright mentioned in her interviews that her mother was proud of her daughter’s achievements. The young woman openly talks about her depression at 20, the role of religion in her life, and recovery. She pays much attention to black people’s problems in Great Britain: many black actors move to the United States because there are no suitable roles in the country.

Letitia will probably speak openly about her partner, too. One day, she might post a picture with her lover on Instagram. However, the actress is focused on developing her career now, so she is single.

On February 18, 2018, the artist appeared at the BAFTA ceremony wearing a black Gucci dress. This color symbolized the support of the Time's Up movement that fought against sexual harassment in cinematography. The elegant garment left Letitia’s shoulders uncovered; fashion experts called it one of the most impressive outfits of the event.

On March 29, 2018, the premiere of the sci-fi adventure movie Ready Player One by Steven Spielberg took place. It was the screen adaptation of Ernest Cline’s novel under the same title. The actress played Reb; although the role was not leading, it was pretty interesting.

In May 2018, the Marvel universe fans had the chance to see their favorite as Shuri in Avengers: Infinity War. Spring 2019 brought the next part of the franchise, Avengers: Endgame.