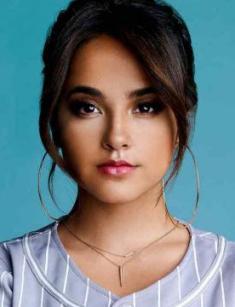 They say Becky G was born in the spotlight. Now her achievements include leadership positions in the Latin American Billboard charts, the appearance on FOX in the TV series Empire and acting in the movie Power Rangers. And the best is yet to come, according to Becky G herself.

Rebbeca Marie Gomez, aka Becky G, was born on March 2, 1997, in Inglewood, California, US, in the family of Alejandra "Alex" and Francisco "Frank" Gomez. Becky's parents from both sides come from Mexico, a city of Jalisco, Mexico, and her parents, and most of her family are from the United States.

The girl was brought up together with two brothers and a younger sister. In December 2017, Gomez publicly announced that she also had a half-sister Amber. The singer discovered the information about her sister when she was thirteen years old, but she could not build a healthy relationship with her.

"We both took steps to become more close, but it takes time to make up for the lost eighteen years. Such stories do not get written overnight" - Rebbeca wrote on her Instagram account on Amber's eighteenth birthday.

Despite sharing the last name, Rebbeca and Selena Gomez do not have family ties.

The Gomez family lived in poverty in the Californian town of Moreno Valley. When the girl was nine years old, her parents were forced to move the children to a garage belonging to their grandparents that they converted into a room, because they could not pay the rent for the house any longer.

Rebbeca's mind was full of thoughts and concerns about the means of helping out her family and ways to find the money. The choice fell on the entertainment industry.

At first, the girl participated in commercials and dubbed videos. Thus, in 2008, Gomez appeared in the short film El Tux and the film La estación de la Calle Olvera for the Discovery channel.

At the same time Rebbeca developed a talent for music, she sang in the girls' group G. L. A. M. In 2009, she independently recorded a video for the debut song "Jelly Bean," and to make it big, posted Capella covers of famous songs on YouTube.

Her creative activity was a way to escape from reality. Rebbeca's street style (the girl walked around in scruffy clothes and almost starved) triggered despise of her classmates. Her peers bullied her. The girl found salvation in writing songs.

Gomez grew up on a variety of music: in the "apartment" of her parents, there could be heard songs of Britney Spears and Christina Aguilera, Etta James, and Temptations. The older generation preferred traditional Mexican tunes, rancher, cumbia. This mixture can be traced in the personal songs of Rebbeca.

The girl did not cease to go from one audition to another with her own compositions. Her parents did not mind, even though sometimes they could not afford even to drive her to an audition, because the gas tank was empty and they did not have the money to fill it up. Despite endless refusals, Rebbeca did not give up, and by the age of thirteen, she learned to play the guitar.

At this age, together with The Jam duo, Gomez recorded a couple of cover-songs: "Otis" by Kanye West and Jay-Z, "Lighters" by Bad Meets Evil, "Novacane" by Frank Ocean, "Take Care" by Drake, "Boyfriend" by Justin Bieber, as well as the original song "Turn the Music Up". These songs were to be combined in "@itsbeckygomes" mixtape, but the project was never brought to life.

The video version of "Otis" interested the producer Dr. Luke, who worked together with Britney Spears and Miley Cyrus, he was struck by the versatility of the young talent. He liked Rebbeca's voice on the record, and then it turned out, that she could play the guitar and compose songs herself. The man met Gomez, asked her to play something, and then offered her a contract with Kemosabe Records label.

In August 2011, Becky released her debut Studio song "Problem" in duet with Will.i.am. The composition became the soundtrack of the cartoon Hotel Transylvania (2012). Then the girl sang "Wish U Were Here" together with Cody Simpson, and her track "Oath," recorded along with Cher Lloyd, became the first one to hit Billboard Hot 100. Now she has a gold certificate from the American Recording Association.

Gomez, who started her career with covers, in 2013 recorded the single "Becky from the Block." The video starred the singer of the original version of "Jenny from the Block," by Jennifer Lopez. In July of the same year, the singer released a mini-collection "Play It Again," which included five songs.

A real breakthrough in Becky's biography came with the release of the single "Can't Get Enough" in collaboration with rapper Pitbull. It headed the Latin Rhythm Airplay in the United States, took 1st place in the Billboard. The success allowed the girl to give her first concert at the Premios Juventud ceremony in 2013.

Her single "Shower" (2014) entered the top 20 Billboard Hot 100, becoming multi-platinum due to the circulation of two million copies. Later songs were not so famous, although the track "Lovin' So Hard" (2015) had a chance - in the video Rebbeca co-starred with her boyfriend, Austin Mahone.

Gomez has recorded many songs - "Mayores" with Bad Bunny, "Sin Pijama" with Natti Natasha, "Mad Love" with Sean Paul and David Guetta. However, what is interesting is that she never released her own studio album.

In 2017, Becky G. fulfilled her second dream and became an actress. The girl appeared in two episodes of the series Empire on FOX, starred in the adventure film Power Rangers in the role of Yellow Ranger Trini Kwon.

Her character created many rumors around Gomez herself. The fact is that Trini is a lesbian, the first superhero in the history of cinema who turned out to be gay.

Becky G. did not stop making music when she was starring in the television series. She sang with Argentine singer Axel for his track "Que Nos Animemos," actively worked out the material for the debut album in Spanish.

Young age is not an obstacle to a stormy personal life, as Becky G. believes.

In 2015, Austin Mahone confirmed rumors about the relationship with Rebbeca on air on MTV Channel, and in April 2016, official information appeared that her boyfriend was the American professional football player Sebastian Lletget, who plays as an attacking midfielder for LA Galaxy in Major League Soccer. Most likely, the couple is still together.

Since 2014, Becky G. is the official face of the cosmetic company CoverGirl. A mandatory condition of the contract is to show products in music videos.

The actress may well go to the podium because she looks like a model, which can be seen in a swimsuit. However, her height does not fit the fashion world standards - 5 feet 5 inches at a weight of 105 pounds.

Becky G.'s net worth is estimated at $3 million. In August 2018, a new movie was added to the filmography of Becky G., the American science fiction movie AXL. The project received negative reviews from critics and did not bring a lot of money.

Gomez also voiced the cartoon Gnome Alone (2017). It was planned that the tape would be released in the world box office, but in the end, it saw the light of day only in Latin America, Europe, and Asia.

In 2019, Rebbeca is preparing to release a long-awaited debut album in Spanish. Most of the material is ready, says the singer to her fans on social media.