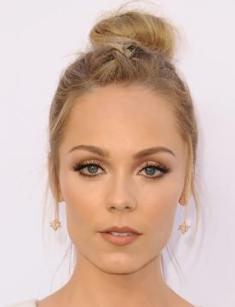 Laura Vandervoort is a Canadian actress, whose filmography includes a wide variety of characters. The credentials of the charming woman have action movies, horror films, and melodramas. She is well-known for the TV series Smallville, Bitten, and V. Laura Dianne Vandervoort was born on September 22, 1984, in Toronto, Ontario, Canada. The actress was a lively and curious child.

When she turned 16 years old, Laura had already managed to try her hand at different activities. She was involved in tennis, basketball, baseball, rhythmic gymnastics, football. However, the actress achieved the greatest success as a martial artist. During her school years, the future celebrity managed to earn a black belt, as well as win a few prestigious city karate competitions.

It is worth mentioning that from an early age Laura arranged various theatrical performances for her loved ones. She read poetry beautifully and always performed on the stage during school holidays. The actress attracted the attention of viewers playing in the television series Are You Afraid of the Dark?, in which she portrayed a girl named Ashley. Her heroine appeared only in a few episodes, but it was enough for Vandervoort’s career to take off.

Laura landed the first leading role in the fantasy comedy Mom's Got a Date with a Vampire. Viewers liked her heroine Chelsea, which inspired the actress and made her move to the USA.

After this leap of trust, Vandervoort appeared only in episodes of TV shows for a few years. She made a breakthrough, shooting in the TV series Instant Star, in which she portrayed an aspiring singer who won a prestigious music contest.

In 2001, the American science fiction television series Mutant X was released. The project shows the distant future when people are genetically endowed with supernatural abilities. Laura got the role of mutant Tina.

In 2007, Vandervoort landed the role of Kara Zor-El in the popular TV series Smallville, broadcast from October 2001 to September 2006. During the filming, Laura had a chance to work with actors Tom Welling, Kristin Kreuk, and Michael Rosenbaum.

The same year, she appeared in Scott Frank's film The Lookout. The plot is based on the life story of the talented hockey player, Chris Pratt (Joseph Gordon-Levitt), who loses his memory after a car accident. Having become disabled, he makes a living working as a night cleaner at a bank which a leader of the criminal group, Gary Spargo (Matthew Goode), plans to rob. The outlaw recruits the feeble-minded janitor, but he is unaware that Chris is a hard nut to crack.

Then Vandervoort played a leading role in the American action movie Into the Blue 2: The Reef. Soon, the charismatic actress joined the all-star cast of the fantasy project V, in which she played Lisa, the daughter of the High Commander of the Visitors.

On the instructions of the mother, Lisa agitated young men and women to join the peace ambassador program. Tyler (Logan Huffman), the son of Erica Evans (Elizabeth Mitchell), is mesmerized by her beauty and charm, so he immediately decided to become a V "peace ambassador." Thanks to the young man, Lisa begins to feel like a human, which is considered to be an unacceptable weakness in the society of the Visitors. Sympathizing with people, she joins the eternal rivals of the Visitors, the Resistance and the Fifth Column, and declares war to her mother.

In 2009, the actress portrayed one of the leading characters in the movie Jazzman, and after that appeared in the fantasy film Out of Control. In 2010, the actress performed the leading role in Riverworld, the four-hour television miniseries directed by Stuart Gillard. The plot is based on the Riverworld books by Philip José Farmer. In addition to Vandervoort, Tahmoh Penikett, Mark Deklin, Peter Wingfield, and Thea Gill played in the film.

In Seth MacFarlane's American comedy Ted, released in 2012, Laura played cashier Tanya, to whom Ted made overtures. The same year, she starred in the film This Means War, alongside Reese Witherspoon, Chris Pine, and Tom Hardy, and also appeared in an episode of the third season of the mystical series Haven.

In 2014, the Canadian TV series Bitten premiered. The story is based on the Women of the Otherworld series of books by author Kelley Armstrong. Vandervoort played a young woman named Elena Michaels, who was trying to live a normal life after being bitten by a werewolf.

In 2016, the actress starred in the TV series Supergirl, in which she got the role of villain Brainiac. After the first season, DC Comics announced the release of a comic book series entitled Adventures of Supergirl. They plan to release 13 issues, which will be published twice a week. It is known that the events in the comic book will not be associated with the TV series, although they will occur in the same universe.

There is little information about the personal life of the actress. All reports related to this topic are just rumors.

The most reliable sources have reported about a relationship between the Canadian celebrity and American actor Chris Pine. They liked each other on the set of the film This Means War. Although the artists do not comment on these rumors, the paparazzi often take pictures of the couple in each other's arms.

The continuation of the cult horror film Jigsaw is scheduled to be released in October 2017. The action takes place in a small town, where the police often find disfigured corpses of residents. The evidence suggests that John Kramer (Tobin Bell) is the killer. However, there is a discrepancy because the Jigsaw Killer has been considered dead for over ten years.

It is known that the film will also feature Clé Bennett, Hannah Anderson, Sonia Dhillon, and Matt Passmore. In September, the actress had an interview at Dread Central and admitted that she participated in the TV series Ice and Frankie Drake Mysteries. The young lady refused to tell the character and plot details because both projects have not been announced yet.

Despite the busy schedule, the famous actress does not forget about her fans. On Instagram, Laura regularly posts photos of filming, as well as videos of her rest. It is worth mentioning that social media are not the only source of the latest news about the life of the famous Canadian actress. Various Internet portals and publications also frequently publish content related to the career of the Hollywood star.

Laura Vandervoort has a net worth of $2 million.