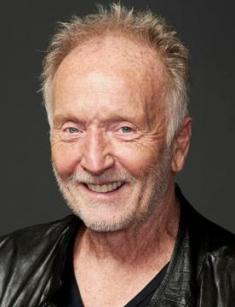 This actor is known to the general public for his roles in the films Sophie's Choice, Mississippi Burning, Ruby, In the Line of Fire. He has worked with directors Alan J. Pakula, John Mackenzie, Sidney Pollack, Martin Scorsese, Wolfgang Petersen, Alan Parker, Harold Becker, and Sam Raimi. However, his most significant role was in the movie Saw. This man's name is Tobin Bell.

Joseph Henry Tobin Jr. was born on August 7, 1942, in Queens, New York, the United States. His mother, an Englishwoman, Eileen Julia Bell Tobin, was an actress, and his father, Joseph H. Tobin, owned a radio station. Besides Tobin, the family had two more children, a boy, and a girl. Shortly after Joseph Tobin was born, the family moved to Weymouth, Massachusetts. As a child, the boy did not think about the career of a famous actor and wanted to become a TV presenter or a writer, so in college, he paid much attention to journalism and other liberal arts.

Bell received his higher education in New Jersey. At the State University of Montclair, the future actor studied natural science and later was sent to the New York Botanical garden for practice. The desire to connect his life with the cinema and theater arose in the young Tobin after attending a seminar of writer and actor of Canadian origin Hume Cronyn and his wife, an English actress, Jessica Tandy.

Tobin received education in the field of acting under the guidance of Sanford Meisner and Lee Strasberg. Having mastered the skills of acting, he performed in the theater at the New York Shakespeare festival, Boston festival of arts and others.

Tobin received the role that determined his future career at the age of forty. He played a waiter in the movie Tootsie directed by Sydney Pollack. It was then, in 1982, that Bell's acting career took off. Before that, there were 29 insignificant roles in the movies Manhattan (where the actor wasn't even listed in the credits because he was among extras), Tales of Ordinary Madness (again, he had a cameo role), Sophie's Choice, The Verdict, and others.

At the same time, Bell played in the theater on Broadway, where he met the director who advised him to look for his happiness in Hollywood. By the way, it was then when the director saw Tobin's potential to play a perfect villain. Bell took this advice and in 1988 got a part of an FBI agent in the motion picture Mississippi Burning directed by Alan Parker.

After that, the guy received one offer after the other, but he still couldn't get a significant part. In the period from 1993 to 2001, Bell starred in the famous Hollywood television series Walker, Texas Ranger.

Bell's moment of fame came in 2004 when the actor signed up for the audition for the movie Saw and got the central part. Even though the movie had a low budget, in the end, its success exceeded all expectations. And the image of Tobin Bell was stuck forever in the minds of the viewers as the maniac John Kramer. Tobin himself says that the movie is not just a slasher that doesn't make any sense, but that it is a movie that makes people think and value their lives. Then there came out seven more parts of the movie that made Tobin famous as a mad murderer from horror films.

Tobin Bell himself says that people around him always react to him as if he was a serial killer in real life. The good-natured actor does not get tired of explaining to the frightened fans of horror movies that in reality, he has nothing to do with his dangerous character from the screen. Tobin did not stop on the last part of the Saw movie series. After it, he got an offer to voice-over John Kramer in a video game that was created based on the movie. The reason for it is simple: Tobin seriously has a voice that perfectly fits the genre of horror movies, as it is soft and frightening at the same time.

For his villainous role, the actor received several MTV Movie Awards and others, including the categories Best Villain and Best Butcher. After this resounding success, the only parts that Bell received were the roles of villains, in such movies as Interstate 60: Episodes of The Road, Goosebumps, Alyce and others.

In addition to horror movies, Bell is known to the general public for his part in the Flash television series (2014) where he played Doctor Alchemy, one of the foes of the main character. In total, the actor played 98 roles in films, produced four movies and played himself in seven motion pictures (Going to Pieces: The Rise and Fall of the Slasher Film, the television series Made in Hollywood and others).

Tobin Bell's biography is not full of family facts. We only know that the actor is married and that he is bringing up two sons. But no details about his wife and children have been revealed to the public. The actor prefers not to post family photos on Instagram.

In his spare time, Tobin enjoys spending time as a coach of a baseball team, and he is always happy to play football. In his youth, among the hobbies of the actor was playing the guitar, photography, and mountaineering in the outskirts of New York.

Tobin Bell has a net worth of $16 million. On the eve of the premiere and release of the eighth part of the favorite horror film Saw with Tobin Bell in the title role, viewers and fans of Tobin's work were looking forward to details. After the release of the previous part of the movie, the audience got tired of the same thing, but this time, the directors promised something special. The eighth part of the famous film entitled Jigsaw became a thriller instead of a classic horror movie.

Even though John Kramer died in the third part of the movie series, he was always present in subsequent films, Jigsaw also starred Tobin Bell, because he is a kind of symbol of the success of the motion picture. Directors boldly declared: "We are proud of this work!" That meant that the audience had something to look forward too. The film came out in 2017, and even though it received mostly negative reviews from film critics, commercially, it was a success, as the film grossed $103 million worldwide.

However, the acting career of Tobin Bell is not just about the roles of villains in legendary horror movies. In 2016, Tobin starred in the comedy-drama film Rainbow Time. In 2017, together with Jigsaw, the world saw another movie starring Tobin, the short film The Sandman shot in the genre of drama.

In Belzebuth, that came out in 2018, Tobin played the role of Vasilio Canetti. Emilio Portes directed the film. The motion picture focuses on a priest that conducts occult rituals and is somehow connected with the antichrist.

The fans of Tobin Bell are currently on the lookout for the new roles of their favorite actor. Bell himself has said in an interview that he has many offers, but it is too hard to decide on what he wants to do next. The actor admits that he does not have as much energy as he used to when he was twenty years old, so it is not possible to take on every project, but he has to think it through and choose the most interesting one.