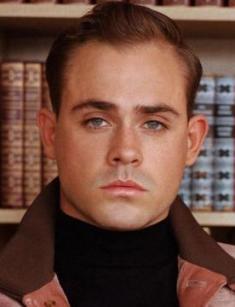 Hills thanks to central roles in two significant projects. This Australian is a role model for his peers, starting on their way up the career ladder on television.

The future actor was born in November 1994 in the capital of Western Australia and the largest city of the Green continent — Perth, located on the Indian Ocean. Not much is known about Dacre Kayd Montgomery-Harvey's parents, although they work in show business. Dacre's mother, Judith Barrett-Lennard, is from Canada, and his father, Scott Montgomery-Harvey, came from New Zealand.

The young actors met in Perth, where they came to participate in the same project. The work affair was continued, and the couple made their relationship official, choosing to live in the city that connected them. Soon the first son Dacre was born, and 12 years later Judith gave her husband a daughter.

The creative atmosphere in the house and the acting environment in which Dacre Montgomery grew up influenced his choice of profession. The Australian began acting in films before reaching adulthood. Having been on the set, he did not dream of another job.

The cinematic biography of Dacre Montgomery started in 2010 when the guy was 16 years old. He made his debut in the short film Bertrand the Terrible directed by Australian director Karen Farmer. The adventure fantasy movie paved the way for him in the cinema, and the shootings helped him develop his acting skills.

The following year, Montgomery received an invitation from Finnish director and screenwriter Vivi Friedman, who took over the filming of the drama-comedy Family Tree. The joint American-Australian project was the first and last feature film of Friedman, who died of cancer in the following year after shootings.

The movie failed at the box office, but it was shown at several film festivals. For the young Montgomery this drama-comedy paved the way to American cinema, the Australian was seen in the United States. And Dacre was incredibly lucky to see the work of a famous cast. On the set, he met Tony and Emmy nominee Hope Davis, American stars Dermot Mulroney, Max Thieriot and Britt Robertson, who eagerly shared their acting experience with the newcomer.

Then there was a long break in the career of the Aussie. Viewers saw Dacre Montgomery on the screens in Mark Lamprell's projects A Few Less Men, and the comedy horror film Better Watch Out by Chris Peckover in 2017. The last film, a joint product of Australia and the United States, was a resounding success and received several prestigious awards in Australia. The horror-comedy was also noted on the most famous European film festival in Brussels, winning the main prize-the Golden Crow.

All of Montgomery's previous movie works were overshadowed by the other two that followed in 2017. The fantastic thriller film Power Rangers directed by Dean Israelite which was based on the series under the same name was mega-popular and collected a record amount at the box office. The director invited Dacre Mongomery along with Naomi Scott and Becky G to play the leading roles. The Australian got into the character of red Ranger Jason Lee Scott.

The second project, which enriched the filmography of the rising star, has strengthened Mongomery's position in the film industry and brought him glory. Dacre appeared in the Duffer Brothers' science fiction series Stranger Things, shot by the entertainment company Netflix. Montgomery joined the cast in season 2, meeting on set Winona Ryder, Sadie Sink, Millie Bobby Brown, and Charlie Heaton.

Montgomery played the older half-brother of the character of Sadie Sink-Max. Dacre's character named Billy Hargrove is a lifeguard in the town pool. Sadly for the fans of the series, Hargrove dies at the end of season 3.

The show with a unique plot and talented actors is admired by both the older and the younger audience. Film critics called the long-running project "quality cinema," noting the brilliant performance of the actors. Stranger Things collected a bunch of awards for the creators and the cast. The most prestigious ones are from the Guild of Actors and Producers of the United States, Saturn, and the American Film Institute Award. The series is nominated for a Golden Globe, BAFTA, and Emmy.

Dacre Montgomery is a handsome young man, whose photos keep appearing on the covers of glossy magazines. The blue-eyed blond with a height of 5 feet 83 inches weighs 169 pounds. The personal life of the new movie star is in the center of attention of the multimillion army of admirers which appeared after the release of Power Rangers.

In the summer of 2016, Dacre started an Instagram account, where his fans can appreciate the pictures of the idol, showing his six-pack and model looks. However, the actor does not post any photos with his girlfriend.

The silence of Dacre Montgomery, who does not want to speak about his private life, gives food for speculation and gossip. Fans and some tabloids have found one girl who continually appears in the company of the young actor. This is model Liv Pollock, a light-eyed and plump-lipped Australian. They say, for the sake of an affair with Montgomery Liv left her studies at the faculty of architecture at the University of Western Australia.

According to the model, she met Dacre in her hometown (they are both from Perth).

"Then we started chatting on social media; our friendship grew into something more."

According to Pollock, the guy's fame does not affect their romantic relationship. The couple shares common values, love of travel, and passion for design: Liv is interested in architecture, Dacre - in interior design.

Dacre Montogmery's net worth is estimated at $1 million. In the summer of 2019, Europe's largest clothing retail chain H&M, headquartered in Stockholm and New York, released a collection of clothes, which is dedicated to the mega-popular series Stranger Things. T-shirts, sports shirts, shorts and swimwear in retro style are trendy among fans of the TV project.

Dacre Montgomery starred in the brand's advertising campaign. In the pictures, the actor has long blond hair and some mustache.

Now the Australian is at the peak of popularity because, in the summer of 2019, the premiere of the 3rd season of the Duffer Brothers series took place.