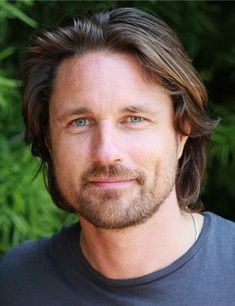 Martin Henderson was born in New Zealand in 1974. His parents are Ian and Veronica Henderson who got divorced when Martin was five. Henderson also has one brother.

Martin attended the Birkenhead Primary School and then Westlake Boys’ High School in Auckland. During this time, he was interested in sports and used to play rugby for the team in school. Henderson was never interested in going to college, so he did not get that part of education. Martin began acting at a very young age: at the age of 13, he first appeared in TV series, Strangers.

After moving to Australia, Henderson became close friends with Heath Ledger, a famous actor who played The Joker in The Dark Knight (2008). The guys moved to Sydney and decided to live together as roommates.

In 1992–1995, Henderson played the role of Stuart Neilson in the soap opera Shortland Street. Besides, he appeared in several Australian movies, including Echo Point (1995) and Home and Away (1996). In 1997, the actor moved to the United States to make a career in Hollywood and to attend a special program at the Neighborhood Playhouse School of the Theatre in New York.

In 1999, Henderson appeared in Kick which can be called as one of his best movies and for that role he got his first nomination for an Award for the Best Actor in a Supporting Role. In 2002, he starred together with Naomi Watts in the horror movie The Ring. In 2004, Martin had the leading roles in the Torque and Bride and Prejudice, a Bollywood-style adaptation of Jane Austen’s novel. Also that year, the actor appeared in Britney Spears’ Toxic music video.

In 2008, Henderson was seen in a commercial for the Cadillac CTS and in one episode of the House, a medical drama. Shonda Rhimes, the author of another medical TV series, Grey's Anatomy, created the series Off the Map (2011), where Martin starred. In 2015–2017 Henderson played in Grey's Anatomy the role of Dr. Nathan Riggs, a love interest of Meredith Grey, a character pictured by Ellen Pompeo.

Henderson’s net worth is estimated differently in various sources, but it is approximately ‎$4 million.

If we look at Henderson’s interviews, we will be able to show you his dating history. Martin has been in relationships with Marnette Patterson, Nicky Watson, Aishwarya Rai Bachchan, Radha Mitchell (who sometimes can be wrongly connected to another actress, Elizabeth Mitchell) and Demi Moore. In 2017, Henderson started dating Helen Randag, a producer and writer.

She is not Martin’s wife yet, and the couple explains it that they do not want to rush due to Helen's previous unhappy marriage. Their sweet photos can be found on their Instagram pages.