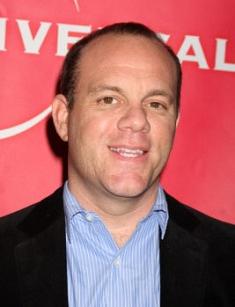 Thomas Papa is an American stand-up comedian. Tom is also known as an actor, writer and producer. Apart from his performances, he is interested in bread baking. He often appears on television and radio shows. Papa is the author of the book Your Dad Stole My Rake: And Other Family Dilemmas (2019), which has suddenly gained popularity.

Thomas Papa was born in Passaic, New Jersey, the U.S. He spent his childhood in Park Ridge, New Jersey and later his family moved to Woodcliff Lake, New Jersey.

In 1986, Tom graduated from Pascack Hills High School. He got an education at the Rider University.

Tom's career started in New York City in 1993. He gave his first performances at open mics. He then was a host at the Stand Up New York comedy club. When he befriended Jerry Seinfeld, a talented comic and actor, the comedians decided to do a joint tour.

In 2005, Tom issued the comedy album called Calm, Cool, & Collected which became his debut work. Later the gifted comedian performed on stage with his show Only Human which received many positive reviews.

In 2011, as a veteran stand-up comedian, Papa had recorded two stand-up shows on Comedy Central. Later he was seen in a new show called Tom Papa: Live in New York City. In the show he hilariously talked about Facebook and other topics, including McDonalds, family, Disney World, and others. His fourth special, Human Mule, came out on December 2016. All of his shows aired on Hulu, Amazon and Netflix.

Tom Papa became a frequent guest of several night shows. In 1992, he appeared at The Tonight Show with Jay Leno. In 1993, he starred at The Late Night with Conan O'Brien and Late Show with David Letterman.

In April, 2018, the actor gave performances on The Ellen stage Comedy event in Bozeman, MT by The Ellen Theatre. He also made a tour around the USA including Chicago, Kansas City, Denver, Nashville, New York City, Portland and other cities.

In spring 2019, Tom Papa appeared as a stand-up comedian at Cobb's Comedy Club in San Francisco.

In 2002, Tom performed a part in the film, Analyze That, along with Robert De Niro. The same year he acted in a movie Comedian, where he played himself.

In 2007, he was offered a voiceover role in the animated comedy film, Bee Movie. He additionally was a writer of this project.

In 2009, Tom Papa showed up as an actor in the film, The Informant!, starring opposite Matt Damon. The film was positively received by the audience. The same year he was the voice of El Super Beasto in the comedy horror cartoon The Haunted World of El Superbeasto.

In 2010, a stand-up comedian and producer Jerry Seinfeld invited Tom to serve as the host of the TV reality show called The Marriage Ref. The show lasted for two seasons and was closed in 2012.

He had a recurring role opposite Julia Louis-Dreyfus on the CBS series, The New Adventures of Old Christine in 2006.

He was a host of the television game show Boom! which was released in 2015.

In addition to filming and giving shows, the actor appeared on the radio. Tom In 2004, the stand-up comedian was a host on the Sirius/XM radio show Come to Papa. The show included starring of such guests as Mel Brooks, an American filmmaker and composer, Ray Romano, an actor and screenwriter, Dick Cavett, a popular TV personality and comedian, and Carl Reiner, a noted comedian and actor. Tom later became the author of the radio show Come to Papa Live.

On August 30, 2018, the actor took part in The Official Podcast on YouTube. He played a huge role in producing the show, which was later re-named Live From Here. Tom was also a head writer of the scripts.

Tom is also a master in cooking. He became a professional in baking of sourdough bread. Together with his family members, he made this recipe famous around the world. Moreover, his idea of cooking bread was recognized as very simple and healthy. After popularizing it, the comedian suddenly was called the Sultan of Sourdough.

He continued to work on his baking method and started traveling around the U.S to gain more experience in cooking. Later, he decided to host the show Baked, which was a huge success to the comedian. In 2018, Tom Papa had revealed his hopes and plans to make a Baked Season 2.

Thomas Papa is a married man and a father of two daughters. Tom does not disclose information about his personal life in mass media, but he often talks about his wife, children and family life in general in his stand-up shows.

In interviews, Tom sometimes talks about his wife and her attitude to his jokes. She must be a wise woman with a good sense of humor, and inspiration for her husband.

Tom shares the secret to a good marriage saying that the young couples have to lower their expectations. He claims that the marriage is far from a dream, but it's an exciting process to work on.

Tom is an active user of Instagram. He has over 60,000 of followers. He regularly posts moments from his everyday life and news about his performances and shows. The comedian has over 70,000 of readers on his Twitter profile.

There's no exact information about Tom's net worth.

In free time from tours, Tom resides in New York and Los Angeles with his wife and family.