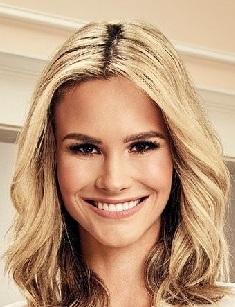 Meghan King Edmonds is a famous American blogger, businesswoman, and reality television star. She achieved recognition after starring in the reality show The Real Housewives of Orange County. Meghan also got herself a name being a top blogger on Instagram.

Meghan King Edmonds was born on 26 September, 1984, in St. Louis, Missouri, USA. She is the oldest child of her parents, whose names are Kevin and Julie.

She has a brother named RJ King, who is engaged in the modeling business and cooperates with such brands as Armani and Vogue Italy. Meghan has two sisters – Julie, who is a professional soccer player, and Caitlin, the actress.

In her youth, Meghan was a track and field star, who competed in the shot put and triple jump during her high school days. Talking about her education, she studied marketing at the University of Mississippi before taking a job in the medical sales industry.

In 2014, Meghan starred in a reality television show Say Yes to the Dress. In the show, her goal was to choose a wedding gown, as she was preparing for the wedding to Jim Edmonds. The show became her first serious work as an actress.

In 2015, she was offered a role in the series The Real Housewives of Orange County. The show is about women who reside in Orange County. It is the story of their lives that depicts their family relationships, work, and dealing with other responsibilities. Firstly, she appeared in the 9th season and turned out to be the youngest actress in the show.

Meghan is also an ambassador and director of the brand Sweat Cosmetics. She promotes a healthy lifestyle, sports activities, and natural beauty products.

However, later it became challenging for Meghan to care for her children and carry out her career at the same time. In 2018, she arrived at a conclusion of quitting her show. Upon such decision, her husband supported her. Meghan doesn't plan coming back to housewives. She is staying in touch with Tamra Judge and Shannon Beador. Meghan also still stays in contact with former cast member Heather Dubrow.

The RHOC star is known to have some altercation with Vicki Gunvalson, who also stars in the show. According to Meghan, Vicki had a problem with her age and also made a mean-spirited comment about her role as step-mom to Jim’s other kids. Meghan then expressed her opinion toward these words and admitted having no respect for Vicki, especially for her lie involving Vicki’s ex-boyfriend Brooks Ayers. He was accused of faking cancer and admitted to fabricating cancer documents.

There was also a conflict between Meghan Edmonds and Lydia McLaughlin in Part 1 of The Real Housewives of Orange County Season 12 reunion. The actresses of the show disagreed over Lydia's behavior toward Meghan's friend Mystic Michaela, who is an aura reader and psychic medium.

Meghan thought that Lydia didn't treat her friend very well because she doesn't believe in psychics. Lydia convinced everybody that she was friendly toward Mystic Michaela, she just didn't want anything to do with her aura readings. At the end of the conflict, Lydia chose not to talk about the tension that arose between her and Meghan during the RHOC reunion, expressing her gratitude for all love and support during the filming of the series.

In the year 2016, Meghan started her blog on Instagram. As for 2019, Meghan has over 900,000 followers. She discusses her family life and motherhood. The blogger also offers recommendations and reviews to the audience using the hashtag “#meghansmusthaves.”

She posts many cute photos of her children. Less than a month after welcoming her daughter Aspen, Meghan Edmonds posted a photo on Instagram where she was ready to hit the gym. She shared a lot with readers how her figure has changed since giving birth. After twins birth, she also showed off her body and gained many admiring reviews. Meghan provides a big motivation to her subscribers to look perfect and at the same, to cope with all the responsibilities, including her big family and business.

Her first husband was an attorney named Brad McDill. They married in 2007 and had lived four years together.

In 2014, Meghan got married a baseball player James Edmonds and became a stepmother to his four children. Edmonds' ex-wife died of cancer in 2015.

On 26, November, 2016, the actress gave birth to their daughter Aspen. Two years later, in June, 2018, the couple welcomed twin baby boys, Hayes, and Hart. She and her husband have seven children combined.

Meghan seems to not concern much about super-expensive things, but everyone was curious about her engagement ring worth. On her Instagram photo where she wears a ring, it looks like it is probably between three and five carats, which range from around fifty thousand to a hundred thousand dollars.

An interesting fact is that later Meghan and her husband were spotted without their rings, but the couple did not attach much importance to it. However, recently, her husband was accused of cheating with the mistress. Meghan wrote a lengthy post on her blog, where she admitted that she found about the allegations against her husband.

James Edmonds confessed exchanging photos with the mistress for several months, but he asserted having no physical relationship with her. Meghan feels sad about the current state of her family, but she believes that their marriage can recover.

The actress has the appearance of a model with her blond hair and a perfect figure. Her height is 170 cm, and the weight is 53 kg.

Being engaged in the cosmetic brand, Meghan reveals some beauty secrets. On her Instagram, she spoke up on the skincare treatment and shared her makeup-free selfies. She liked the idea of promoting naturalness of the look and was supported by many followers.

Meghan also does charity work. She took part in the Fight Colorectal Cancer organization. She was known to be in good relations with Edmonds' ex-wife, so she was eager to raise funds and also to do research about this progressive disease.

As of 2019, the net worth of Meghan King Edmonds is estimated at $5 million.