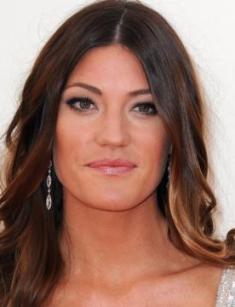 This flamboyant actress rose to prominence after filming in the popular TV series Dexter, which was a great success on American TV from 2006 to 2013. For her role as Debra Morgan, Jennifer Carpenter was nominated for the Saturn Award for Best Supporting Actress on Television for seven consecutive years and won it in 2009.

The actress has mainly appeared in thrillers and action films. She is well-known for her roles in such smash hits as The Factory, The Devil's Hand, Gone.

Jennifer Leann Carpenter was born on December 7, 1979, in Louisville, Kentucky, USA. Her parents, Robert and Catherine Carpenter, raised their daughter Catholic and sent her to St. Raphael the Archangel and then Sacred Heart Academy.

It is not known when the girl got acquainted with the world of art and was fascinated by it. But Jennifer says in interviews that at the age of 8, she told her relatives that she wanted to become an actress. Ever since she has shown perseverance in achieving her goals and never doubted her career choice.

After graduation from high school, the girl studied at the Walden Theatre Conservatory, where she gained her first acting experience and studied the basics of drama and performing arts.

Later, she attended the famous Juilliard School in New York City, which graduates have been many Hollywood stars. While studying at this prestigious institution, Jennifer made a stage debut in 2002, playing in the Broadway revival Arthur Miller's The Crucible. Such famous artists as Laura Linney and Liam Neeson became the debutant’s partners.

The same year, the young woman made her feature film debut. It was a bit part in the drama People Are Dead. Jennifer then got small roles in the movies Ash Tuesday (2003), D.E.B.S. (2004), and White Chicks (2005). She played the first prominent role in the film The Exorcism of Emily Rose (2006).

Carpenter played the title character, Emily Rose, a teenager who died after an attempted exorcism. By the way, the script was loosely based on real events that took place in 1976 in Germany. The character was inspired by a student, Anneliese Michel, who died of exhaustion after the priests tried to get rid of demons, so they wanted to cure the patient's mental disorder.

Critics appreciated Carpenter's profound acting which received positive reviews and earned the actress two MTV Movie Awards. Thanks to this success, Jennifer appeared on television. The same year, Showtime launched production of the series Dexter, and the young actress was invited to play one of the leading roles.

She portrayed Debra Morgan, the sister of protagonist Dexter Morgan, a serial killer who worked as an expert in the Miami Police Department. Due to the psychological childhood trauma, Dexter has a homicidal mania. The policeman who adopted the boy teaches him to take up a terrible weapon only against really guilty people: murderers, rapists, robbers. His sister is the only person who loves the maniac.

The series aired on TV for eight seasons and made the actors famous. For example, Jennifer’s credentials included a considerable number of awards.

“You know, everything that happens in my life outside Dexter is like a vacation. I do not want to say anything negative about the show. It's just a very emotional and difficult kind of work,” the actress admitted during the filming.

At the same time, she played actively in movies, extending her filmography. She starred in the drama Battle in Seattle, the horror film Quarantine. It is worth mentioning that Jennifer landed leading roles in the thrillers Seeking Justice and The Factory, in which she worked together with Nicolas Cage and John Cusack respectively.

The blood-chilling horror film The Devil's Hand, in which Carpenter got the bit part of Rebecca, was released in 2014. The same year she worked as a voice actress. She voiced Natasha Romanoff in the animated film Avengers Confidential: Black Widow & Punisher.

From 2015 to 2016, for the first time since the end of Dexter, Jennifer Carpenter played a significant role in the television series, starring in the crime drama Limitless. The story tells about the everyday life of FBI agents. Jennifer’s heroine is a special agent named Rebecca Harris. The project was closed in 2016.

2018 was marked by the shooting in the movie Dragged Across Concrete, in which the actress played a bank clerk Kelly Summer, who died during a bank robbery.

Besides professional recognition and viewers' love, the series Dexter helped the actress improve her personal life. The performer of the role of Dexter Morgan, Michael C. Hall, became her husband. The couple lived together for a short time (from 2008 to 2010), and during this short period, they had to pass through a real ordeal. Michael was diagnosed with Hodgkin's disease, cancer that affects the lymphatic system.

Jennifer did her best to help the husband to fight the illness, and the man was finally in remission, but the family broke up. Despite this, Jennifer and Michael continue to maintain warm relations.

In 2016, people became aware of the wedding of the 36-year-old movie star and a member of the folk band The Avett Brothers, 35-year-old Seth Avett. The couple dated for three years, and after the birth of their son Isaac Avett, they decided to marry in 2015.

The Hollywood star’s hobbies are a healthy lifestyle and sports, she often posts photos on social networks (she is more active on Twitter than on Instagram), depicting her slim figure in a bikini, which is the result of daily self-improvement.

Now the actress is filming in the TV series The Enemy Within. In the project, which has been launched in 2019, the star has the leading role of Erica Shepherd, the former CIA Deputy Director of Operations, who is serving a life sentence in a high-security prison for high treason.

However, FBI agent Will Keaton asks her for help to catch a very dangerous spy. Erica is offered a deal, and she comes to terms.

Jennifer Carpenter has an estimated net worth of $8 Million