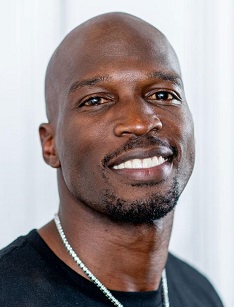 Chad Ochocinco (Chad Johnson) is an American retired football player and current Professional soccer player for Boca Raton FC. He has performed for different teams in the National Football League and tried out coaching.

Attending it, Ochocinco trained alongside future NFL wide receiver Steve Smith. Three years later, Chad transferred to Oregon State University – there he also joined its students' football team. He and T. J. Houshmandzadeh were the leaders of the squad, led it to an 11–1 season and a victory over Notre Dame in the Fiesta Bowl that year. Moreover, Chad broke a school record for the longest touchdown reception with a 97-yard reception in a game against Stanford University.

Chad Ochocinco took part in the 2001 NFL Draft and was selected by the Cincinnati Bengals of the National Football League. In his rookie year, the sportsman caught 28 passes for 329 yards and one touchdown. 2003 was marked by recording 1,355 receiving yards. The next year, he brought the franchise 95 passes for nine touchdowns and 1,274 yards, including 117 receiving yards in a 58-48 win against the Cleveland Browns.

Totally, the season was closed with 87 receptions for a league-leading 1,369 yards and seven touchdowns. Chad Ochocinco was the first Bengals’ player who had led the NFL in receiving yards.

Ochocinco's brilliant performances brought him lots of fans. So, he took part in the fan voting for the 2006 Pro Bowl and got the first place.

The 2007 season was started by the game against the Baltimore Ravens where Chad registered the game's first touchdown on a 39-yard pass from Carson Palmer. In total, he made five receptions for 95 yards and a touchdown in the game. Playing against the Cleveland Browns, the sportsman passed 209 yards on 11 catches for two touchdowns – in spite, his team was beaten. Remarkably, the match brought Ochocinco a career total of 7,229 receiving yards which broke the Bengals franchise record previously held by Isaac Curtis.

Cincinnati Bengals' match against the Tennessee Titans was also one of the most memorable season's games – he caught a career-high 12 passes for 103 yards and 3 touchdowns.

He closed the year with 4 catches for 131 yards and 2 touchdowns which he registered in a winning match against the Miami Dolphins, giving him 93 receptions for 1,440 yards and 8 touchdowns on the season.

He also made 1,440 yards setting a new Bengals franchise record. So, he closed 3 seasons with the squad with a new record for receiving yards. His yardage was third most in the NFL, his receptions were 12th most, and his touchdowns were tied for 15th most in the league.

At the beginning of 2008, Chad Ochocinco was invited to ESPN's Mike & Mike radio show. There he shared his thoughts about how the media and team treated him during the 2007 season – so, they named him selfish, and nobody came to his defense. The sportsman even supposed Cincinnati Bengals would trade him. However, head coach Marvin Lewis denied it.

In June 2008, Chad got injured – he suffered a partially torn labrum. However, he didn't stop playing and kept on performing.

The next season started unsuccessfully for the Bengals – they were defeated 0-8. Chad Ochocinco was unable to make more than 37 yards in the first 4 games.

After a dismal performance (3 receptions for 43 yards) against the Dallas Cowboys in a loss, Johnson celebrated having consecutive games with 50-yard receiving totals (57 against the New York Giants & 52 against the Pittsburgh Steelers).

That year, Ochocinco showed the worst stats since his rookie campaign – he made 53 catches for 540 yards and 4 touchdowns.

In 2009 the Philadelphia Eagles and the New York Giants became interested in buying Chad. That season, the sportsman recorded 1047 yards (it was his 7th career 1,000-yard season), 72 passes and nine touchdowns. He replaced injured Patriots receiver Wes Welker at Pro Bowl - it was Chad's sixth Pro Bowl appearance.

At the beginning of 2010 season, Chad made 12 receptions for 159 yards and a touchdown setting the team record for touchdown catches and becoming the 6th player in NFL history to score 10,000 receiving yards with one team.

In July 2011 Ochocinco was traded to the New England Patriots. That season was one of the worst Chad's season in his football life in terms of stats – he caught 15 passes for 276 yards and 1 touchdown. The reason for it was his recent injury and his father's death

The next year, in June, the sportsman left the franchise. Several days later, he was signed to the Miami Dolphins. In August, after Chad's arrest, the team released him.

The sportsman was offered to sign a two-year contract with the Montreal Alouettes of the Canadian Football League, and he agreed. In 2014, he took part in 5 regular season matches because of injuries and family matter. That year one of the best funny moments in Chad’s career happened – he got crushed by Ray Lewis while playing.

The player did not report for mandatory training camp in the spring of 2015 and got a long suspension. The next year, Ochocinco became a free agent.

In 2017 Ochocinco played with the Mexican team Monterrey Fundidores for one game registering a 41-yard touchdown.

Chad’s net worth is evaluated at $5 million.

In spring 2016, Chad contacted the Cleveland Browns new coach and his former coach Hue Jackson to start working with the receivers during training camp. They allowed him to serve as a guest instructor for the Browns.

Chad is a father for six kids – 5 sons and a daughter. His son Chad Jr. is famous for playing college football at Arizona State University.

In 2012 Ochocinco divorced his wife, Evelyn Lozada. The woman said that the marriage was irretrievably broken after he allegedly head-butted her during an altercation over a receipt for condoms she found in his car. The sportsman was arrested on August 11, 2012 for a domestic violence and Lozada was treated for a laceration to her forehead. The horrible news was on highlights of every sports media.

Speaking about Evelyn, she is an American media personality, star of the VH1 reality series Basketball Wives.

Nowadays Chad is romantically linked with Lauren Popeil. The has been dating since 2013. His previous girlfriend is K. Michelle.

Syleena Johnson, a famous American singer, is rumored to have has marriage with Chad for her last name. However, the two have never crossed paths.

In his career, the sportsman has collaborated with famous sports brands, such as Adidas.