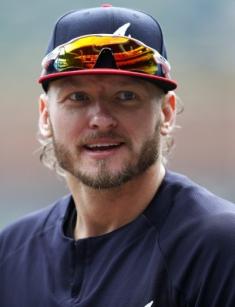 Josh Donaldson is an American baseball player who seems to have turned over a new leaf in his career. In 2019, the athlete received the NL Comeback Player of the Year award; he has recently begun to play for the Minnesota Twins.

The future sportsman was born in Florida into the family of Levon Donaldson and Lisa French. The boy’s childhood was not easy: the mother had to raise him alone, for the father had been accused of several crimes, some of which pertained to drugs, and put into prison. Josh did not make amends with him even after Levon was released.

The troubled home influenced Josh’s behavior: the teenager was quite aggressive. Fortunately, he found a positive way to deal with it – sports – and started developing his talent. Donaldson went to the Pace High School and Faith Academy, where he practiced baseball, basketball, and soccer.

Joshua continued his education at Auburn University; he played for the Auburn Tigers as an amateur.

All in all, the young man’s defensive stats were good; he practiced as a catcher and third baseman in this period. Donaldson’s progress was noticed: he was named the Louisville Slugger Preseason All-American in 2007.

Josh began his professional career with the Chicago Cubs, who drafted him in 2007. The athlete had 150 games with the team and polished his skills so that he became a valuable player when he joined the Oakland Athletics in spring 2010. Both major and minor league performances were brilliant.

In 2012, Donaldson switched to the third-base job; he had nine homeruns; 2013 was marked with the first grand slam. His talents were finally recognized: the athlete celebrated his debuting All-Star appearance in 2014.

Soon, Donaldson joined the Toronto Blue Jays for three years, 2015-2018. It was a period of numerous awards and achievements. In 2018-2019, the man changed two teams, the Cleveland Indians and Atlanta Braves.

Joshua rarely talks about his personal life. He is currently dating the woman named Briana Miller; her pictures appear on Donaldson’s Instagram and Twitter sometimes. The media reported that the athlete was cheating on Briana, but, judging by their recent photos, it is not true. The lovers are happy together, and Miller might become Donaldson’s wife soon.

Apart from baseball, the man is fond of golf and basketball; he plays video games whenever he has some spare time. Donaldson is a great fan of the series Vikings and even contributed to the fourth season of his favorite project as an actor: he personified Hoskuld there.

At the end of 2019, there were many rumors that the Washington Nationals, St. Louis Cardinals and Los Angeles Dodgers wanted to see the sportsman as their member. Eventually, the Minnesota Twins offered Donaldson an $84 million contract for four years; fans learned the news that he had accepted it in January 2020.