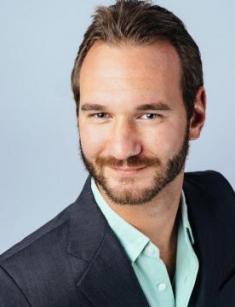 Charismatic, buoyant orator, Vujicic earned international popularity despite the fact that he was born without arms and legs.

Nicholas James Vujicic was born in Melbourne into the family of Dušanka and Borislav Vujičić who migrated to Australia from Serbia. The father was present at childbirth; as soon as he saw the boy’s shoulder without an arm, he rushed to a corridor, horrified. Later, he asked a doctor if his son was born without an arm. The sad doctor told him the boy had no arms and legs: it was the tetra-amelia syndrome.

The disease took the baby’s arms, and he had an underdeveloped foot with toes grown together. Surprisingly, Nick’s health was perfect if it had not been for this physical condition. The boy’s brother and sister had no health issues.

The mother did not breastfeed the baby for the first four months; the parents did not know how to handle him. Little by little, they got used to the special boy and loved him just like he was.

Right after the child was born, he had surgery that separated his toes. Thus, Nick got the only limb to explore the world. He learned how to write with it and even skateboard pushing his body.

Little Vujicic felt dispirited by his physical condition. The parents insisted their son should go to an ordinary school, and the boy saw himself as somebody flawed. Peers often bullied Nick; he could not protect himself. When the boy was six, his cousin died of cancer; it was a severe shock for the would-be orator.

At the age of ten, he decided to commit suicide, but the thoughts about his family kept him away from that: the boy realized how much it would hurt them. At that period, Nick found himself in Christianity and got acquainted with God’s love that filled everything and accepted imperfect people.

At 17, Vujicic delivered his first preach to church visitors. At the age of 19, the young man was invited to give a speech for Griffith University students; he studied there. The event was a success, and young Australians absorbed Nick’s ideas. This is when Vujicic realized that motivating people with the world of the Lord was the meaning of his life.

The young preacher’s non-standard appearance, charm, and love of life made him popular. In 1999, he founded the religious charity organization Life Without Limbs. The next several years, Nick’s popularity was growing so immensely that he gained the prestigious Young Australian of the Year Award.

Vujicic always educates himself. He has two higher educations (accounting and financing). Besides, he owns the motivation company Attitude Is Altitude.

To share his worldview to the broad audience, Nick Vujicic organized many lectures and preaches. He has visited more than 45 countries; for instance, he delivered motivational speeches in Moscow and St. Petersburg in Match 2015. Some 110 000 people went to listen to him in India.

Vujicic has a great sense of humor. One day, he had to go to another city to hold a meeting. He entered a plane, found his place, and introduced himself as the plane’s captain. Several seconds of silence followed, and everybody burst out laughing.

Nick promotes the idea of unconditional love. He held a marathon to support it: he hugged 1500 participants. The man often uses the Internet and posts videos, blog notes, and Instagram photos. Besides, people devour the preacher’s books where he describes his life and reflects on people’s place in the world.

In 2009, Nick appeared in The Butterfly Circus by Joshua Weigel. The short movie shows the circle with unusual artists: an old man flying at the top of the circus, a kind and gracious acrobat girl, a flexible man who can place himself in a suitcase. However, Vujicic is the main character: he is an object for everybody’s contempt, and people throw tomatoes at him.

It is the story about the strong person who listens to his heart and begins to live a full life, even though he has no arms or legs. The story is similar to Nick’s life. The Butterfly Circus became one of the best motivational movies and took prizes at Ashland, Heartland, Sedona, and Method Fest.

The writer’s bibliography includes four bestsellers. He talks about strong will that can be developed if a person believes in themselves and tries to achieve a high goal. The first book, Life Without Limits: Inspiration of a Ridiculously Good Life, came out in 2010 and marked the beginning of the preacher’s phenomenon.

Nick not only tells his own story but also shares the principles of a happy life. The absence of limbs does not prevent him from enjoying his life: Vujicic can go surfing, swimming, and ski jumping. He types 43 words per minute.

In this text, Vujicic described how he managed to transform faith into action and paid much attention to the challenges that every person has to face. Stand Strong followed in 2015 and proved to be equally popular; the quotes from the book go viral on the Internet.

Nick was a loving boy; he fell in love with a girl Megan when he was an elementary school student.

At 19, the young man fell in love again; the relationship was pretty difficult. The platonic romance lasted for four years, and the feelings faded away eventually. Nick thought he would never have his own family, but it was not true.

When Nick saw his future wife for the first time, his emotions were overwhelming; he felt like he had arms and legs. Kanae Miyahara is half Japanese and half Mexican; the woman’s father moved to Mexico and organized his own business. Later, when the man died, the family moved to the United States. Kanae went to the same Evangelic church as Nick.

Three months after the meeting, in spring 2011, the couple decided to live together. It was challenging, but Miyahara quickly got used to the daily routine peculiarities. At that moment, Nick lost all his savings because of the economic crisis, but the woman did not leave him; she showed much wisdom and patience.

In 2012, the man put an engagement ring into a box of chocolate ice cream that Kanae liked, and proposed to her; she accepted the proposal. The wedding ceremony was modest; only a few pictures appeared on the Internet. Nick described his love story in the 2016 book Love Without Limits.

The writer’s wife loves her husband and helps him with his charity and preaching work. The couple often attends social events and sports matches.

The next year, on Valentine’s Day, Nick’s first child, the son Kiyoshi James, was born. Fortunately, the baby was absolutely healthy and did not inherit his father’s problems. The young parents were on cloud nine. Two years later, the second son, Dejan Levi, was born.

In 2017, the Vujicic family welcomed the twin girls: Ellie and Olivia. Nick shared the happy news on Facebook.

People from all over the world sent thank-you letters and presents to express their gratitude.

Today, Nick Vujicic and his family live in California. The man likes to fish and play golf and soccer in his spare time. The true Australian, Vujicic loves the sea and often goes surfing.

Today, Nick Vujicic continues to carry out his mission; his speeches are scheduled for years. The man is ready to go to the end of the world to inspire people in despair.