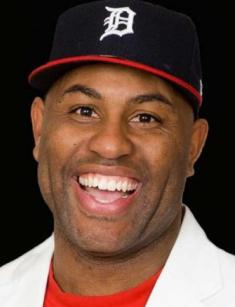 As a kid, Eric Thomas left his home because of scandals with family relatives, became homeless and had two destinations – to give up and die because of hanger, poverty and lack of a shelter or to struggle for his bright future. He gave preference to the second option and now we can see the result of his struggle – he is one of the most prominent orators of today. By his performances, speeches and podcasts on Internet, Thomas inspires people around the world learn to cope with life problems and reach their purposes for already twenty years. By the way, have you already checked out Eric Thomas’ projects?

Eric Thomas’ birthplace is Michigan. His mom was a teenager when she gave birth to him. The celebrity had a rough childhood which influenced his future life hugely – having quarreled with his relatives, he stopped attending school and became homeless sleeping on benches outside and stealing from people to eat. He passed two years living in poverty and grief. But once his life changed – Eric got acquainted with a preacher who encouraged him to enroll at school again and help others.

Having completed his high school education, Thomas entered a college and received his degree in 2001. Being a university student, Eric Thomas launched a unique association aimed to help young people in need.

In 2003 Eric Thomas was hired by the State University of Michigan while getting a master’s diploma. He served there as an academic adviser working with the poor youth. He elaborated a special program aimed to inspire such students to study and develop.

So, Thomas began getting a reputation of a motivational speaker encouraging people to change their lives and never give up, in spite of all life ordeals. Later, he launched a firm specialized in consulting, coaching and personal growth.

The specialist has often been invited to perform at events in various motivational establishments, at summits in business companies, etc. Lebron James, a professional basketball player, once admitted he thought he had become a winner of the Basketball Tournament in 2012 due to Eric Thomas’ spirit support. So, the speaker has also attended sports events to give an emotional push to players. In the 2010s journalists working on Fox News invited the celebrity to an interview to talk about his occupation, to discuss how much he influenced people around. By the way, speaking about his influences, Disclosure, an American musician, released the 2013 collection ‘Settle’ where Thomas’ quotes can be heard.

Besides, the speaker has his own YouTube channel where he uploads motivational videos and podcasts related to various aspects of life – love, family, finances, health, achievements.

In 2019 he arranged a tour across the United States. His first performance will be held on October 1.

Eric Thomas’ net worth is evaluated at $3 million.

There is not much information about Eric Thomas’ private life. He has a wife named De-De Mosley – the two met while being college students and tied the knot several months later.

The professional is often compared to Jeremy Anderson, another motivational orator. Both have huge bases of fans and compete for a high assessment and being best on their field of acting.