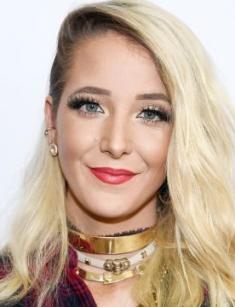 In the era of the Internet, it has become fashionable to share the events of your life or thoughts with outside observers. Discussions about the semantic load of such a step are continually going on. Meanwhile, the number of those wishing to express themselves on social media regularly grows, especially since it is possible to earn good money on a public demonstration of one's own abilities.

No wonder the income of Jenna Marbles, who is often referred to as The Woman With 1 Billion Clicks, according to rumors, has exceeded $9 million. There is nothing surprising about this fact: if we were to believe the same Internet sources, the number of followers of this extravagant girl has grown over 19 million, and the number of views has exceeded the unthinkable 3 billion.

Jenna Nicole Mourey was born in Rochester, graduated from Brighton High School in 2004. After receiving a bachelor's degree in psychology at Suffolk University in Boston, she studied for a master's degree in sports, psychology, and counseling.

However, the chosen profession was not in high demand. Jenna, who moved to New York, had to work in various spheres - as a go-go dancer in a nightclub, a spa salon employee, a bartender, a blog writer. Nevertheless, this cheerful and optimistic girl kept her head up and recorded some clips just for herself.

Until 2010, Jenna has collaborated with the blog Вarstool Sports, developed the women's version of the site. According to Marbles, she worked together with people who were connected with the Internet, and that's why, to some extent, they were experts on what to post on Youtube.

They helped Jenna post the clip How To Trick People Into Thinking You're Good Looking, which got five million views in the first week after coming out. Marbles saw that people liked what she did and considered keeping her own Youtube channel, where she started posting stories about things that had happened to her during the day, ironic advice, and just short gaming videos.

The next video clip How To Avoid Talking To People You Don't Want To Talk To received recommendations from established media outlets - The New York Times and ABC News. Jenna gave her clips simple but catchy names: How Guys Take A Shower, How Girls Fall Asleep, What A Girl's Makeup Means and the like.

Her videos started being translated into different languages and shown with a voice-over in various countries around the globe, taking her fame to the international level.

The girl has a specific sense of humor, based on irony mixed with a lot of swear words. Besides, to the delight of the army of fans, Jenna is sincere and down-to-earth, she isn't afraid of touching upon delicate subjects. She doesn't have any problem with negative comments, because she considers them a part of any famous person's life.

In 2015, Jenna Marbles became the first YouTube personality whose wax figure appeared in Madame Tussauds Museum. The Internet-celebrity remained true to herself and shared her experience and funny thoughts in the process of becoming a wax figure.

The wax blogger is depicted in a pose that is often taken by people who can not imagine their life without the Internet: the girl holds her phone at arm's length as if wanting to take a picture with the visitors of the museum. A tablet was placed next to the figure so that everyone could upload the photo with the star right away.

The fame of the popular American woman disturbs many. In the same 2015-m on the little-known channel Colton Eicher, there was a video with the provocative title JENNA MARBLES IS PREGNANT?!. The video had nothing to do with Jenna, and there was no information about a change in the girl's life.

Thanks to the popularity on the Internet, Marbles had an opportunity to try herself in cinematography. The filmography of Jenna Marbles is not big but exciting. For the most part, she participated in filming television series, playing cameo roles.

The young actress got a small part in the short-movie Epic Rap Battles of History, filmed as a rap battle.

In 2016, the blogger became the executive producer of the film Maximum Ride, based on the eponymous series of novels by James Patterson.

Little is known about the personal life of Jenna Marbles. The first boyfriend that Jenna dated publicly was Max Weisz. The couple ended the relationship for unknown reasons and that upset many followers, particularly impressionable ones who compared the separation with the divorce of their own parents.

Jenna Marbles' new boyfriend is Julien Solomita. The young man, as well as Max, has his personal YouTube channel.

Jenna has four four-legged Pets - Chihuahua Mr. Marbles, Italian Greyhounds Kermit and Peach, and rescue Greyhound Bunny. The girl used the nickname of her first dog as a stage-name, when, according to rumors, she tried to hide from her mother what she was doing on the Internet. The Italian Greyhound Peach appeared in the house of Marbles because of Julian, who is the owner of the doggy.

The girl posts funny photos of her pets on her Instagram account. She also devoted many of her videos to her doggies, such as How To Care For Your Cermet, Treating My Dogs Like Babies For A Day, Teaching My Dogs How To Swim and others.

Besides, Marbles posted a video in which she discusses the merits of dogs of different breeds with blogger, musician, and parodist Jack Douglas. The guy has his own YouTube Channel titled JACKSFILMS.

Later, already having achieved fame, Jenna launched a line of toy dogs Kermie Worm&Mr. Marbles, which are very popular in the United States. She has also released her own merch with catchphrases from her video-clips. In 2019, Jenna and Julien welcomed a rescue Greyhound Bunny to their home. Marbles filmed a couple of videos where she showed the dog and talked about their experience. Even though it has not been easy for both the couple and the dog, Bunny is slowly getting adjusted to the new environment and other pets in the house.

Jenna is a pretty girl with a height of 5 feet 41 inches and a weight of 119 pounds, but it is difficult to judge the color of the blogger's hair – every time she appears before fans with a new look. It is easy for her to die her hair blonde, and then pink or purple, trying on the style of Japanese anime girls.

Marbles does not take beauty-bloggers who tell girls how to become perfect seriously and urges everyone to think of their appearance with irony. No wonder funny and sometimes quite sharp comments accompany her makeup tutorials. When it comes to fashion designers, Jenna prefers Gucci.

Jenna Marbles has a net worth of $5 million. Jenna's Instagram, Facebook, and Twitter accounts have millions of followers, and the number of fans is still growing. Marbles pleases subscribers with funny inventions every Wednesday or Thursday. Over the years, the girl has not changed the formula of her videos.

Unlike other YouTube personalities who invest the earned money into new cameras, lights, and other features, Mourey shoots in her kitchen or living room and does not pay any attention to the background of her clips.

Her followers regularly toss Jenna ideas for new videos: how to eat soup with a fork, how to wax your sleeping friend, and so on. The vlogger says that she reads them all but keeps the responsibility of the final decision to herself.