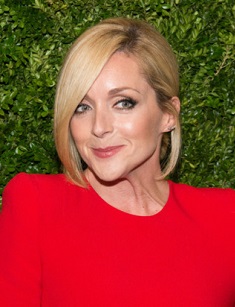 Jane Krakowski, the New Jersey-born beauty is an accomplished actress, dancer and singer with numerous awards and credits to her name from the movie, theatre, and TV. She won Tony, Drama Desk and Outer Critics awards for her stunning and sultry portrayal of "Carla" in Broadway's Nine opposite Antonio Banderas, and won an Olivier Award while starring in Guys and Dolls with Ewan McGregor in London's West End.

Also, Jane got wide acclaim, starring in National Lampoon’s Vacation, and 30 Rock. Krakowski regularly performs on a stage on Broadway. She has a child. The actress has an estimated net worth of somewhere near $15 million.

Jane was born in a small town, simply called Parsippany, which population is about 55,000 people. Her birthday was on October 11, 1968. She was brought up in a family of a chemical engineer, her father Ed, and artistic director and theatre instructor, her mother, Barbara. Jane’s native name was Jane Krajkowski. It came from her father’s Polish origin. Jane didn’t speak Polish well, but her father and grandpa were fluent. Barbara was of half-Polish descent. The other part of Barbara’s family had Canadian, French, and Scottish relatives.

Jane’s parents were completely passionate about work. Ed and Barbara decided not to hire a nanny. That’s why they always took little Jane with them to their jobs. As a kid, Jane was involved in theatrical activities. She started to do ballet at the age of four. Later, Barabara was disappointed that Jane was not suitable for this occupation because of Jane’s wrong body shape. That could not prevent the Krakowski girls from continuing to engage in art. Soon, Jane began to spend more time dancing, achieved Broadway dancing.

Jane entered the Professional Children’s School in New York, which was intended for aspiring actors and dancers. She learned acting well by the time she completed her schooling. Then Jane attended Rutgers University-New Brunswick.

The movie debut of Krakowski succeeded in Vacation in 1983. The same year, the horror movie Sleepaway Camp was released. Jane participated in some scenes of it. However, she asked to drop out the scenes with her before the movie’s release, because of her character’s too cruel death scene. In 1987, Adrian Lyne offered the novice actress to play in his psychological thriller Fatal Attraction. Jane agreed. Jane started to receive various movie shooting suggestions.

She worked with Liza Minnelli (Stepping Out), William Fichtner (Go), Jude Law (Alfie), Willem Dafoe and Salma Hayek (Cirque du Freak: The Vampire's Assistant), Vanessa L. Williams (Dance with Me) and others. In 2000, Jane appeared in Flinstones 2 by Brian Levant, where she played the role of Betty Rubble. In 2004 Krakowski appeared on TV, in A Christmas Carol: The Musical. Since 2006, Krakowski is one of the behind the voice actors. She voiced Giselle in two parts of Open Season, and Rachel the Sloth in Ice Age.

In the year of Jane’s movie debut, she also appeared on TV. Her first project was the TV movie No Big Deal, where she played Margaret. Jane was invited to play Theresa Rebecca Kendall in the soap opera Search for Tomorrow in 1984. She was its member until the show’s ending in 1986. In 1997 Krakowski began starring Ally McBeal, playing Elaine Vassal. Those projects brought her some nominations for various awards.

NBC’s 30 Rock, American satirical TV sitcom, was released in 2006. The New Jersey native was among the first cast members. She played Jenna Maroney, and once sang a song called “Muffin Top”. All in all, Jane got 33 nominations for awards and won 10 of them.

Jane attended the New York Comedy Festival's event “Stand Up For Heroes: A Benefit For The Bob Woodruff Foundation”, which held at Town Hall on November 5, 2008. In 2009 Jane married a British menswear designer Robert Godley. The "30 Rock" actress gave birth to their son Bennett Robert Godley on April 13, 2011, in New York. The couple divorced in four years after the wedding, in 2013.

In 2018 Jane Krakowski filmed in a new Sonic commercial with Ellie Kemper, advertising the new $3.99 Crispy Tender Dinner. Krakowski has an estimated net worth of somewhere near $15 million.

She earned all of her wealth through starring in movies and series for decades. Jane Krakowski salary and earnings per any of the shows she starred in are not revealed to the public, but she probably made a lot from them.

It included 21 songs. Krakowski's debut album featured songs popularized by the female performers who had inspired her, including Anita O’Day, Ann-Margret and Eartha Kitt. There were, however, a couple of detours: the Sesame Street favorite, "Rubber Ducky" and an offbeat "Drug medley" of "When I Get Low, I Get High" and "Wacky Dust". She also included a contemporary twist with a brilliantly updated version of Rodgers & Hart’s "Zip" called "Tweet" with special lyrics by Marc Shaiman and Scott Wittman.

The quintet included: Michael Kosarin as music director, arranger and piano. In 2016, Jane released the second solo album “She Loves Me”. It was the Broadway cast recording, which consisted of 26 songs. Jane is a talented singer and had contributed her vocals to the album “Love Songs & Lullabies” by Jim Brickman. They also recorded Christmas songs on the album “Broadway Cares: Home For The Holidays”.