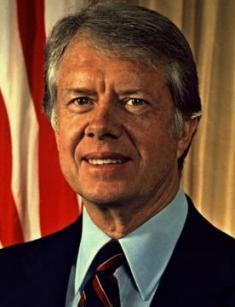 The winner of the Nobel Peace Prize of 2002, former United States President Jimmy Carter in a short period went all the way from a soldier, businessman, and senator to a full owner of the White House. The ruler, who aggravated the Cold War with the USSR and boycotted the summer Olympic Games of 1980, received positive assessments for his post-presidential work and is now the longest-lived political leader in the history of the United States.

The biography of James Earl Carter Jr. began on October 1, 1924, in the small town of Plains, located in Georgia. The future president is distantly related to such famous people as Richard Nixon, Bill Gates, the founder of Cornell University Thomas Cornell and one of the first British immigrants, owners of cotton plantations and industries.

The father of the little Democrat was engaged in investments in agriculture, owned a shop, and successfully led the processing of their land and growing peanuts. His mother worked as a nurse at the local hospital, which received the status of Lillian G. Carter Nursing Center decades later.

Besides James, the Carter family had three children with whom their parents traveled the country and settled in the African American community of the Webster administrative district. The boy became friends with black neighbors and spent his childhood growing peanuts on his little farm of one acre.

At a young age, Jimmy attended Plains High School and in the last years of his studies, despite the average physiological parameters (a height of 5 feet 74 inches and a weight of 161 pounds), played in the junior basketball team. Dreaming of becoming a student of the U.S. Naval Academy, in 1941, the young Carter began to study engineering at Georgia Southwestern College and then continued his education at the Georgia Institute of Technology in Atlanta.

In 1943, the guy achieved his goal and passed a three-year training in an educational institution based on the United States Navy. Showing 60th result in performance, Jimmy received a Bachelor of Science degree and the rank of warrant officer of the Navy of the United States.

For two years, the young officer served in the Pacific and Atlantic oceans, and then moved on board of the USS Pomfret submarine and in the rank of Lieutenant took part in the program of development of nuclear submarines.

In 1952, Carter, as a specialist in naval reactors, was sent to Washington, where he participated in the repair of the emergency Canadian model NRX and attended a course of lectures on nuclear power. After his father's death in mid-1953, Jimmy left the service and returned to Georgia to continue and expand the family agricultural business.

Carter's political career began in the 1960s in Georgia. Becoming a prominent member of the local community, the owner of the peanut business ran for the Senate and after exposing the fraud of the Democrats won the elections in 1962.

Thanks to restraint in dealing with controversial issues, Jimmy became a diligent legislator and made connections in the Democratic elite. He was the Chairman of the West Central Georgia Planning and Development Commission and engaged in the distribution of subsidies for social and community projects and because of the College expansion program for the first time came into conflict with representatives of the Republicans.

Carter later headed the Education Committee and, after securing substantial funding for local schools, enlisted the support of the electorate and put forward his candidacy for Governor of Georgia.

The first attempt was unsuccessful, and Jimmy returned to agriculture and began to prepare for the 1970 campaign. Turning to the Evangelical teachings, the former senator became a religious missionary and learned to say what a group of voters wanted to hear.

The result of this behavior was a victory over the representative of the Republicans, after which Jimmy opposed racist policies and won the hearts of the black population of Georgia.

As Governor, Carter served as a civil rights advocate and provided African Americans with jobs in the state departments and social institutions. He then reformed the allocation of schools and tried to distribute the budget evenly between schools for the rich and poor.

In 1972, the head of Georgia made dozens of public speeches, became a delegate to the National Congress of Democrats and tried to win the favor of conservative members of the American community with an intention to participate in the runoff of the presidential elections.

The official nomination of Carter took place at the Washington National press club on December 12, 1974. And while fellow Democrats were skeptical of the former Governor's chances, Jimmy won the New Hampshire primary election and received full-scale support from the same party.

For nine months of the election race, Carter was on top of the exit polls and earned the favor of the elite sector of the American media. The United States citizens believed in the possibility of creating a Federal Agency for consumer protection, a separate Department of Education and the signing of the Treaty on the reduction of nuclear weapons with the USSR. As a result, Carter won the election with a slight margin, and on November 2, 1976, received the status of the 39th president of the United States.

As head of state, Jimmy attempted to reorganize the internal policies of the United States and reduce unemployment and inflation. However, these aspirations were not successful, and the country was struck by the energy crisis, which was followed by a slowdown in economic growth and an increase in oil prices.

Amnesty for Vietnam War-era draft evaders, educational and health care legislation, as well as the support of the LGBT community and public fight with drug abuse, became the decisive moments of Carter's term.

In foreign policy, the 39th president improved relations with Canada and eased tensions in the Cold War with the Soviet Union. Having agreed on the limitation of strategic weapons, in 1979 Carter sealed the SALT II nuclear arms reduction treaty with the famous kiss with the leader of the USSR Leonid Brezhnev.

However, the "friendship" between the leaders of the world's nuclear powers lasted only a few months and finally stopped when the Soviet Union brought troops into Afghanistan. As a result, the Treaty was not ratified by Congress, and American athletes boycotted the 1980 Moscow Olympics.

Another foreign policy step of Carter was taking part in settlement of the Arab-Israeli conflict, as a result of which the warring parties concluded an agreement on a truce and formulated the principles of coexistence in the Middle East.

However, this success was a drop in the sea of international and domestic failures of the President of America. The public eloquently discussed the results of his term that was concluded by a failed assassination attempt and a situation with a rabbit, when the head of the White House barely managed to escape from a mad animal that approached him as he was going on a boat.

As a result, the re-election campaign for a second term did not bring Carter the desired victory, and he passed the chair over to the Republican candidate Ronald Reagan. The image of the current leader of the United States was negatively affected by the situation with American hostages in Iran and the failed rescue operation known as the Operation Eagle Claw.

After his defeat in the presidential election, Carter returned to Georgia and has been actively engaged in social work since 1981. Together with his wife, the former leader of the United States founded a non-profit organization aimed at improving the lives of people in more than 80 countries.

Working with the private research University of Emory, Jimmy has been involved in resolving several world conflicts and promoting democratic strategies aimed at strengthening human rights and improving the economic situation on the planet.

Through Carter's efforts in 1994, the United States agreed with North Korea to freeze the nuclear program. Besides, the staff of the former president's center helped informal negotiators from Israel and Palestine to reach consensus and in 2002-2003 to develop a model peace agreement.

In 1995, Jimmy contributed to the problem of violence in the African great lakes region and played a vital role in the negotiations on the Nairobi Treaty between Uganda and Sudan.

Thanks to these and many other achievements, Carter earned a reputation as a successful diplomat and in 2002 was awarded the Nobel peace prize "for his work on finding solutions to international conflicts and promoting democracy and human rights…»

In 2015, as part of The Elders ' delegation, Jimmy visited Moscow and talked with Vladimir Putin and Sergey Lavrov about the situation in Russia and Ukraine.

In his youth, Jimmy Carter married a girl named Eleanor Rosalynn Smith, and now the couple has three sons, one daughter, eleven grandchildren, and two great-grandchildren. During the years of political activity, journalists learned a lot about the personal life of the family of the 39th president. An interesting fact was the friendship of the American leader with the legend of rock and roll Elvis Presley, in memory of which there exist books of memories and rare photos.

Sharing his passion for fishing, tennis, and winter sports with his wife, Carter could always count on her support at home and work. In July 2016, the Carter couple celebrated the 70th anniversary of the wedding as the number of years spent together caught up with the famous American long-livers George and Barbara Bush.

However, shortly before the holiday, the mood of the family was overshadowed by the news of an illness found in the body of the head of the large family. In 2015, after surgery on the liver, the ex-President of America was diagnosed with melanoma of the liver and brain. To stabilize his health, Carter underwent chemotherapy and a course of immunotherapeutic drugs.

As a result, on December 6, 2015, Jimmy published an official statement and reported that the treatment helped, during the last scan, the doctor found no signs of cancer.

Jimmy Carter has a current estimated net worth of $7 million. In recent years, due to old age, Carter lost the ability to lead an active political life. Nevertheless, he continues to make statements regarding the actions of the current American president, Donald Trump.

In the spring of 2019, the 39th US President became the oldest living inhabitant of the White House and broke the age record owned by 94-year-old George Bush senior.