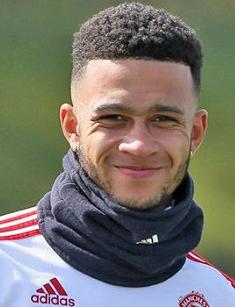 Dutch by birth, Memphis Depay started his professional football career in Eredivisie in PSV Eindhoven, 24 times champion of the Netherlands. Memphis scored 50 goals in 124 games with PSV, won the championship and became the world’s best young player in 2015. The same year Depay moved to England and spent two bad seasons at Manchester United. He could revive his career in Ligue 1 as a player of Lyon.

According to transfermarkt.us, Depay plays the center-forward position, sometimes performing as a left winger or attacking midfield. His current market value is $51 million. The main source of Depay's income is from football. His net worth is roughly estimated at $4 million. Currently, his annual salary is $4.6 million.

Memphis is a native of Moordrecht’s province. His father was born in Ghana, while his mother was from Holland. They welcomed Memphis on February 13, 1994. Soon after his birth, the relationships between parents started deteriorating. When Memphis was four years old, his father left the family. That fact left a deep wound in Depay’s psyche.

His mother soon met a new partner who made their lives traumatic. Though Depay tried to use football as a means to get away, he did not always succeed. Memphis was a student who was extremely difficult to handle, with boundless energy but no control. Soon the situation changed, Memphis’s mother broke up with her partner, and Depay moved to his grandparents. That finally brought some stability.

Depay’s grandfather Kees took up the role of his father. Memphis was a very insecure child. But like many other kids, he loved to spend time playing football on the street. One day, he and Kees were watching the football on TV. Then Feyenoord won the 1998-99 Eredivisie trophy. Little Memphis turned to his grandfather and said:

“One day you will be able to watch me play football on TV, too!”

That’s why Kees helped his seven-years-old grandson to join the local side VV Moordrecht. In 2003 Sparta Rotterdam was interested in Depay. Rotterdam was located near Memphis’s native city, and his relatives understood that the club would be a comfortable step-up. At the age of 12, Memphis became an object of interest for a lot of scouts. Choosing among football academies of Ajax, Feyenoord, and PSV, Memphis decided to move to Eindhoven.

Memphis started to play for PSV in 2011. Initially, he was in the reserve team. His debut appearance was on September 21 in KNVB Cup. However, he could play in the main tournament only in February, when he came on in added time. Depay scored his first goal in a match against SC Heerenveen on March 18. In his rookie season, Memphis collected three goals and made eight appearances.

In 2012 Depay signed his first professional contract. He had great potential but didn’t show great stats in that season. The turning point of his career was the 2013-14 season when Memphis scored some goals in European tournaments and helped PSV to take the fourth position in the national championship. At the end of the season, Depay took place in the national team of Holland and visited Brazil.

After Depay’s successful World Cup’s performance, many European scouts showed interest in him. There were rumors about his transfer to Man City or Man Utd. However, Memphis spent the 2014-15 season in his native team. He began to score goals from the first matches, helping the club all competitions. As a result of his outstanding game, he scored 22 goals in the national championship, became its top scorer, and PSV won the Eredivisie.

In summer 2015 Mancunians fought for Depay against PSG and won that battle. Memphis was sold to MU for $40 million. He got to the number 7 shirt. And immediately the question arose whether he could become a new legend for the MU or Ronaldo would remain the last legendary seven of the devils. That’s why Memphis faced enormous pressure from the press and fans. He was criticized a lot for his inexpressive playing.

Memphis couldn’t overcome all the difficulties of the Premier League. He stopped scoring goals; he couldn’t find a suitable place in the field and didn’t do any useful actions while playing. Getting less and less playing time, very soon Memphis became a substitute player. He could score only two goals in Manchester.

In January 2017 Memphis got a chance to revive his career in France at Lyon. Depay became the creative focus of a Lyon and reminded the fans for what he was called the best young player in 2015. His tandem with Nabil Fekir became one of the strongest in Ligue 1. In February 2019 Memphis was the only player, showing a decent level of football in a match vs. Barcelona when Lyon lost 5-1. Depay could score 40 goals at Lyon in all tournaments.

The first big appearance of Memphis in a national football team of Holland was in 2011 when he got into the squad for the UEFA European Under-17 Championship. The junior team found the success that year and won the tournament. Soon, Memphis participated in FIFA U-17 World Cup. Two years later Depay made a debut in a senior national team. He appeared in qualification’s game on October 15, 2013.

In 2014 Depay became one of 23 players, who were selected for the 2014 FIFA World Cup. They became third that year. Depay scored two goals and became the youngest Dutch player ever, who managed to score a goal at World Cup. He was nominated for the best young player of the tournament but lost the title to Paul Pogba.

In June 2017 Depay shocked the football world after releasing his first ever rap song featuring his national teammate Quincy Promes. They released a music video on YouTube. The song was titled “LA Vibes Freestyle 1.0”. It collected about 150,000 views in several hours. Six months later, Memphis issued his freestyle "Kings & Queens".

Memphis was not going to stop. In October 2018 he released his debut single "AKWAABA" in collaboration with some Dutch rappers. His next freestyle “5-mill” was written in honor of Depay’s Instagram account, which had earned 5 million followers. December became the month of Depay’s second single’s appearance. It was called “No Love”.

In 2017 Memphis took a step closer to Hollywood fame after it had been announced on June 26 that the player got engaged to Lori Harvey, the daughter of television presenter Steve Harvey. The father of the bride took pride in confirming the engagement personally via his official Twitter account, showing Depay had already made a good impression on his future father-in-law.

Steve posted the following message: “Marjorie and I are proud to announce the engagement of our youngest daughter Lori to Memphis Depay, this young man is a good one! Congrats!” However, months later there were rumors that the two split and called off their engagement, but neither one of them ever confirmed it.

The Memphis’s break up with Lori was proved in December 2017, when Lori was photographed attempting to hide in singer Trey Songz’s car.