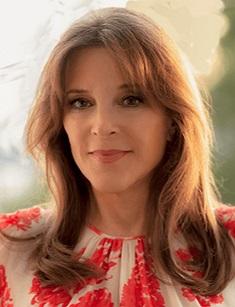 Marianne Deborah Williamson is an author, social activist and politician whose political party is Democratic. Besides, she is a candidate involved in the 2020 United States presidential election. Williamson has written more than ten books which are mostly about spiritual growth, morality.

Marianne Williamson was born in Houston, Texas, in 1952. Her parents were Samuel Williamson, a lawyer, and Sophie Ann, a homemaker. Williamson has an exotic ethnicity: her father was a Russian Jewish immigrant, and mother had Belarusian Jewish and Ukrainian Jewish descent. Marianne was the youngest of three kids in her family. As a young child, she had a really comfortable childhood.

Speaking about her education, Williamson graduated from the Houston's Bellaire High School and attended Pomona College in California, where she studied theater and philosophy. In two years Marianne got dropped out and moved to New York in 1973 because she wanted to be a cabaret singer.

In 1979, Williamson read “A Course in Miracles” (1976), Helen Schucman’s book, and got inspired. After that, she left New York and moved back to Houston, where she ran a bookstore and a coffeehouse (at the same place). In four years, Marianne went to Los Angeles and started lecturing on "A Course in Miracles” very often, and soon she started doing it in other cities of the U.S. and Europe.

In 1992, Williamson released her debut book, “A Return to Love…”. It was presented on The Oprah Winfrey Show that year. By the way, it was the time, when Marianne created a discussion about Schucman’s book, and this brought a lot of fame and more sales for her author. “A Return to Love…” was included in the book list of bestsellers in opinion The New York Times. Williamson is a very famous and respected author; lots of readers post quotes from her books on Twitter and other social platforms.

Besides Oprah’s show, Williamson has appeared on others, for instance, Good Morning America, and Real Time with Bill Maher. In June 2019, there was a question about the person who would play Marianne Williamson on the show Saturday Night Live, and a lot of people prefer the actress Cecily Strong, firstly, because of her accent. The person's speech is rather essential, and another actress who has a similar accent is Bernadette Peters.

Although we mentioned that Williamson's net worth is $1.1 million, it is actually estimated as between $780,000 and $2 million.

In November 2018, Williamson announced about the creation of a presidential explorative committee. She hired the film producer and also a politician, Brent Roske, to be a leader of her operation in Iowa. Iowa Democratic Party proposed the creation of “virtual caucuses” in the 2020 election, and Marianne’s campaign answered that it would set 99 “Virtual Iowa Caucus Captains” to be supporters in virtual and in-person caucuses both.

In January 2019, it was officially announced about launching Marianne’s presidential campaign. Maurice Daniel became her national campaign manager. In February, Williamson’s campaign committee “Marianne Williamson for President” was filed. Also that month, Paul Hodes, a former Congressman, was appointed as a New Hampshire state director and also a senior advisor for Marianne’s campaign. Another advisor was Gloria Bromell Tinubu, a former assemblywoman of the Georgia state who used to be a running partner in Phil Noble's bid for governor in 2018. However, she left this position later.

In May this year, it was declared that Williamson had got enough investments from donors to enter the official primary debates. On the Democratic Debate, Marianne appears together with Andrew Yang, Bernie Sanders, Joe Biden, Kamala Harris who also run for the president.

At present, Williamson is not married. However, she once told her audience about her previous marriage, and her husband turned out to be a heroin addict. In 1990, Marianne gave birth to her daughter, India Emma. That became a reason for Williamson to move to Montecito because she did not want to raise her child by herself in a big city like Los Angeles.

In June 2019, Williamson confirmed that she moved to Des Moines, Iowa due to the 2020 caucuses.

By the way, one of the politicians who inspired Williamson was John F. Kennedy, a former U. S. President.