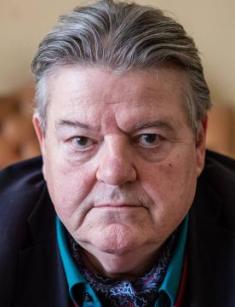 The Scottish actor Robbie Coltrane is one of the most recognizable figures in Great Britain. Children all over the world know him as the kind giant Hagrid in Harry Potter movies. Coltrane usually plays comic parts, but his talent is not limited to it: he takes part in drama projects, paints, practices music, and produces movies.

The future actor graduated from the prestigious Glenalmond College, even though it was difficult for him to follow the college discipline sometimes. Further on, the young man went to Glasgow and enrolled at Glasgow School of Art. Besides, Robbie was fond of cars and social activities; he fought for nuclear disarmament and animals’ rights.

It was a surprise for the parents when their son changed the profession and became a comedian. The young man took the stage name from the American saxophonist John Coltrane (by the way, there is an episode in Harry Potter where Hagrid plays the trumpet). For the next twenty years, the artist played secondary characters in series, performed at local theaters, and hosted TV shows about cars.

However, the audience remembered the actor for the part of Charlie McManus, also Sister Inviolata, in Nuns on the Run. The gangster has to wear women’s clothes, and the comedian showed his brilliant talent for transformation.

As Coltrane earned critics’ recognition, he started receiving roles in prestigious projects. In 1995 and 1999, he portrayed the Russian antagonist in two James Bond movies, GoldenEye and The World Is Not Enough.

The psychological detective From Hell gave the man the role of Sergeant Peter Godley. In 2001, the audience made acquaintance with Robbie’s Hagrid; as the actor said in his interviews, he realized that “fame is not a tap you can just turn off”.

The whole cast of Harry Potter had to deal with obsessive fans sometimes. However, it was easier for the majority of the actors to mask themselves and appear as an ordinary person; Daniel Radcliffe, Emma Watson, and Rupert Grint grew up, and their appearance changed somehow. It was too late for Coltrane, though. His character, Hagrid, was a pretty notable figure: huge, clumsy, hairy, and bearded.

Although the actor’s sizes were magnified to make Hagrid a giant, people easily recognized the actor in the street. Robbie Coltrane’s height is 6.07 feet (185 cm.), and his weight is about 220 lbs. (100 kg.). Martin Bayfield, the professional rugby player, worked as Robbie’s stunt; his height was 7.22 feet (220 cm.). There were two shacks: the large one was used for interior filming, and the small one was used to make the giant look huge.

Good-hearted Hagrid with the gloomy story of his origin bears some resemblance to Santa Claus: children and adults like him. Perhaps, it was the reason why the director Stephen Sommers preferred to use the actor’s voice in the fantastic action Van Helsing: Coltrane looked pretty much recognizable. His character, Mr. Hyde, appeared in two movies and their animated prequel.

In comparison, it is always beneficial for a TV presenter to have a notable look. Robbie Coltrane is often invited to host events and talk about various things.

The actor managed to overcome a dark period in his life: he used to abuse alcohol. The man’s family was haunted by bad luck for almost ten years. In 2003, Coltrane told journalists that his father died of lung cancer at the age of 56, when Robbie was only19. Seven years later, the younger sister Jane committed suicide and took a handful of antidepressant pills.

By the end of the 1980s, Coltrane moved to Mexico for a while and underwent a treatment course; he recovered. At that period, the artist met his would-be wife, Rhona Gemmell, who was 19 years younger than Robbie. The couple lived together for a long time and married officially on December 11, 1999, with their kids present. The son Spencer was born in 1992; the daughter Alice was born in 1998.

Robbie gladly gives interviews and tells funny stories about Harry Potter filming. One day, Daniel Radcliffe changed language settings in Robbie’s phone and selected Turkish. Coltrane had to ask the hairdresser Eithne Fennel to call him father and ask how to say “change the language” in Turkish. However, he politely avoids questions about his family.

Although the ado about the magic world has faded away a little, the actor still has to hide from obsessive fans. Unlike his young colleagues, Coltrane does not post pictures on Instagram and uses e-mail to communicate with his fans. The Scottish created a list of the sexiest unhandsome men, and energetic, fat Robbie topped it.

In 2017, Coltrane was nominated for BAFTA for the role of Paul Finchley in the series National Treasure. Today, he is working on the show Robbie Coltrane Critical Evidence.

Speaking of his dream, the artist says he used to dream about winning the Le Mans race driving a Scottish car; when he grew older, he got a new dream: to create a movie that people would watch 30 years later.