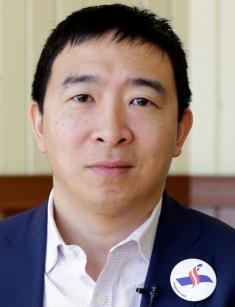 The American businessman created a career with his own hands and never stood aside from the social problems of the country. He is a fighter with poverty and inequality, who believes that economic growth and creating the right jobs in the right places would help people live in peaceful and prolific society. In 2017 he became a Democratic presidential candidate who provides the idea of universal early education and dreams to teach the future American generation to be conscious entrepreneurs working for the commonwealth.

He was born in 1975 in New York, his mother and father are immigrants from Taiwan. His parents moved to the USA in the 60s. They both went to the same grad school where they met. His mother worked as a system administrator, and his father was a researcher. As a teenager, he studied economy and political science and graduated from law school. Yang has a brother.

His career started working in a company as a corporate lawyer. But sooner he has found that this job didn't suit him. He tried to launch a small company, and it didn't work out. Then he worked for a healthcare startup where he got priceless experience from successful entrepreneurs. At the age of 25, he made $125,000, and his parents were proud of him.

Later he ran an educational company which became number one in the country. When he became prosperous, Yang decided to create jobs in cities. He launched the company which helped entrepreneurs to develop their business and create jobs in cities like Cleveland, Detroit, and Baltimore. In 2017 this company produced more than 2500 jobs across the country.

He proved to be a philanthropist who believes that economic growth can change the lives of ordinary people for the better. If entrepreneurs create new right jobs in the right places, the country will be able to stop poverty, unemployment, and hopelessness.

He was the CEO of a nonprofit organization whose leading role was training and recruiting college graduates. As a CEO, he earned more than $ 200,000 per year. In 2017 he stepped down from that position.

The candidate offers changes in the healthcare system. The democrat said that the health care system is far from being perfect; he considers it would be better to let the government fund healthcare. Yang believes that the government must protect all undocumented immigrants before 18 years and launch special programs to attract skilled immigrants. He also stands for keeping the southern border and using new technology to secure it.

He wants to attract investments for slowing down the speed of climate change. Yang intends to update electing technology and supports automatic water registration and lowering the voting age to 16. He is a supporter of abortion and affordable contraception, and LGBT-community.

On education, he aims to raise teacher's salary, make free two-year community colleges, and provides universal early education and introduction of life-skills education in high schools. In his presidential campaign, in the interview to Anderson Cooper, he announced about his plan according to which each adult in America would receive one thousand dollars per month. As the presidential candidate, he participates in various political TV shows and meets opponents. He visited Ben Shapiro's show, was the quest of "Real Time with Bill Maher," gave an interview to CNN. To the polls, he created the following slogan: Humanity First Make America Think Harder (MATH)

Not Left, Not Right, Forward.

Thanks to his practical work and creation of various nonprofit organizations, the businessman got recognition both by people and politicians. The highest recognition which he got was from the Obama White House when it called him a Champion of Change in 2012. Besides, In 2015 Yang was honored the name Presidential Ambassador of Global Entrepreneurship.

Yang considers himself a spiritual person but not religious. His wife stays at home with their children, and the entrepreneur said that he believes that his wife did more critical work than he did. The couple has children and lives in New York. His elder son is autistic.