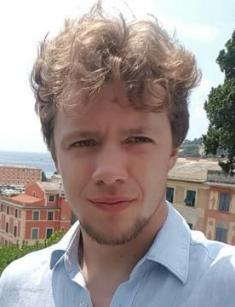 Sports experts call Artemi Panarin a promising hockey player. The athlete has succeeded in the Russian team and the NHL. Despite his young age, the young man has achieved great heights, receives a decent salary, and has a happy relationship with model Alice Znarok.

Artemi Panarin was born in Korkino, Chelyabinsk region, on October 30, 1991, under Scorpio zodiac sign. The Panarin family was not wealthy. There was a risk that the child would eventually fall into bad associations. The boy's grandfather, former hockey player Vladimir Levin, offered to enroll him in a sports club, and the parents chose ice hockey. His grandfather believed in his grandson's success, while his mother and grandmother were worried about progress in studies and possible injuries.

After the first classes, it became clear that the boy had potential. But Artemi did not like ice hockey. He was capricious and did not want to go to workouts. After retirement, Levin continued to work and spent all his money on his grandson’s activities and took the boy to classes. Panarin recalls with gratitude the care of his grandfather. The hockey player often says in interviews that he owes his victories to his grandfather, who believed in him from the very beginning.

At the age of 7, Panarin became a player of the ice hockey team, Traktor Chelyabinsk. When he turned ten years old, the boy began studying in a sports boarding school. At the age of 13, he became a student of the Signal sports school. Then the young man began to play for the HC Vityaz in Podolsk. The team agents noticed the quick hockey player on time. Until 2008, Artemi had played in the junior league. In 2009, his name appeared in the Championship team application.

Artemi Panarin began a professional career during his teen years. At the age of 17, he was lucky to play in the five significant games, recording an assist. The coaches noticed the player’s potential. He began playing less to avoid overwork. In 2009, Panarin became a member of the HC Vityaz Chekhov, where he played forward. For the season, the hockey player managed to score 21 goals and record 32 assists.

Experts pointed out with disappointment that during his 2010-2011 performance in the youth league, Panarin became less accurate and active. The results and performance of the player deteriorated, but this did not affect the interest of the KHL coaches and managers. The same year, the athlete was lucky to play for the Russian national team.

In 2012, Artemi Panarin received an invitation to join the HC Ak Bars. The performance of the player did not amaze the fans. The hockey player scored only one goal in 12 games. A run of bad luck turned into a series of successful performances, after which Artemi was invited to play for SKA Saint Petersburg. The athlete improved tactics and technique of playing, and he continued his professional development. In the 2013-2014 season, the athlete appeared in 51 games and scored 20 goals.

In 2015, Panarin scored 26 goals in 54 games. The same year, representatives of the HC Chicago Blackhawks offered him a contract. Artemi Panarin scored a goal against the New York Rangers Already in the first match. 2016 was marked by the hockey player’s first NHL hat-trick. For participation in the regular season, Panarin won the Calder Trophy as the top rookie in the NHL.

They extended the contract with the player. Under the terms of the agreement, Artemi was supposed to earn $12 million. The athlete signed the most expensive 2-year contract in the NHL. At the same time, the documentary film Artemi Panarin about his life and career development was released.

In 2018, the hockey player plays for the HC Columbus Blue Jackets. Panarin plays left wing. He is called an aggressive player. The videos depicting his participation in fights are posted on the Internet.

The young man has been successful in sports, as well as in love. The first known relationship was a love affair with Alexandra Lvova. Nowadays, Artemi Panarin is in a relationship with Alice Znarok. His girlfriend is the youngest daughter of the award-winning coach, Oleg Znarok, and a popular model. Alice is considered one of the most eligible brides.

The couple met at the 2016 IIHF World Championship, where Artemi played for the Russian national team. At that time, Alice collaborated with Match TV and recorded video of the competition. The hockey player had to make a bid for the sympathy of the beautiful lady. He spent all his free time with her, caring for the chosen one.

The lovers tried to hide their relationship. They even skillfully confused the paparazzi, separately returning to the hotel where they lived together. The first official appearance of the couple was a visit to a party, given in honor of the bronze medal won by the Russian team.

The couple's relationship is still stable and serious. The journalists are sure that Alice Znarok will become Artemi Panarin’s wife, and they are waiting for the decisive step of the young man. But young people are busy building their careers and do not rush into marriage. Their photos appear regularly in fashion magazines, giving the press a reason to discuss the hockey player and model’s personal life.

Panarin’s biography is the story of a boy who came from a small town and has achieved sports stardom. In 2018, he was one of the best NHL players who scored the most goals in the shootout.

Fans of the athlete are closely watching his accounts on Twitter, Instagram, and VK. Artemi regularly posts photos of workouts and games and also shares information about everyday life.

Artemi Panarin did not participate in the 2018 Winter Olympics in Pyeongchang, but he supported colleagues on social media.

Nowadays, Artemi Panarin has a net worth of $8 million.

Artemi Panarin is a young hockey player whose career arouses admiration. He has achieved success in various clubs. The young man won the 2011 World Junior Ice Hockey Championships and the Gagarin Cup in 2016. He received the Calder Cup title in 2016 and also won the Golden Helmet playing for SKA Saint Petersburg. In the 2017 season, Artemi Panarin was recognized as the top scorer and best forward of the World Championship.

The impressive achievements of the hockey player suggest that there are still many goals and new heights ahead.