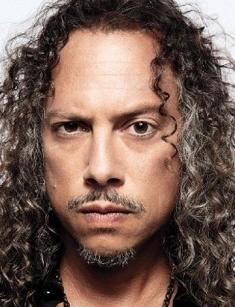 Kirk Hammett is one of the most outstanding representatives of the metal rock music industry. A member of the band Metallica, he developed affinity for music since an early age and has reached high results. Let’s get acquainted with Kirk Hammett!

Kirk Hammett’s birthplace is San Francisco – he was born there on November 18, 1962, to the multicultural family. Teofila "Chefela" Oyao, his mother, was a Filipina, while her father had Irish roots. Speaking about Hammett’s education, he attended De Anza High School where he got acquainted with his best friend Les Claypool of Primus.

As a child, Hammett was deeply interested in horror movies. When he fought against his sister, the parents placed him in front of the television. He watched The Day of the Triffids and found it exciting. Shortly after Hammett started stealing his brother's Frankenstein figures and spending pocket money on horror magazines. Bela Lugosi was his favorite actor.

Meanwhile, Hammett showed genuine interest in music after listening to his brother Rick's extensive record collection (which included Jimi Hendrix, Led Zeppelin, and UFO). Hammett decided to sell his horror magazines to buy music records and purchased the guitar - a "wholly unglamorous" Montgomery Ward catalog special. Generally, he paid much attention to his musical equipment because it effected much the acoustic. His favorite company producing guitars was Fender.

To earn a living, Kirk also started working at the Burger King but did not continue for long and quit working in the fast-food chain once he had saved enough money to buy a Marshall amplifier.

So, Kirk Hammett decided to focus seriously on a music career. He had an interest towards the fledgling thrash metal genre and tried to build a career on the field. 1980 was marked by creating a five-member band, Exodus. Its members were Paul Baloff, the vocalist, Gary Holt, the guitarist, Geoff Andrews, the bassist, and Tom Hunting, the drummer.

In 1983 Hammett was invited to join the band Metallica when its member Dave Mustaine, the lead guitarist, left the band to form his own band, Megadeth. The musician agreed. The band released their first album soon – it was named ‘Kill ‘Em All.’ At the moment, Kirk Hammett was taking private lessons from guitar virtuoso Joe Satriani.

The musician wrote and contributed riffs for the band’s following collection entitled ‘Ride the Lightning.’ The riffs were used in the single ‘Enter Sandman.’ The hit happened to become one of the most popular Metallica’s songs – it got to the 399th place on Rolling Stone’s list of 500 Greatest Songs of All Time. It was the first track and first single on Metallica’s ‘The Black Album.’

Enjoying previous successes, Metallica began working on their third album. It was named ‘Master of Puppets’ and was presented in 1986. The collection displayed his style of music and was considered by many as one of the metal’s greatest all-time albums.

1986 brought the band a horrible tragedy - during the European tour, Cliff Burton died in the tragic accidental death after the tour bus slid off the road and overturned. In 1988 Metallica pleased their fans with their fourth album ‘And Justice For All’ which was followed by the 1991 self-titled album, ‘Metallica.’ Both collections were of enormous commercial and critical success. The band presented more albums - ‘Load’ in 1996, ‘Reload’ in 1997, ‘Garage Inc’ in 1998 and ‘S&M’ in 1999.

In 1990, Kirk Hammett changed his guitar playing technique to Jimi Hendrix-esque style. In 2003, fans could listen to his solo on Metallica’s next album ‘St Anger.’

In 2006 Kirk Hammett voiced for himself in an episode of the show The Simpsons titled The Mook, the Chef, the Wife, and Her Homer. That time he also voiced on the shows ‘Adult Swim show Metalocalypse’, ‘The Queen of Denmark’ and ‘Space Ghost: Coast to Coast.’

In April 2004, Kirk Hammett was awarded for his contribution to the world of music - alongside Metallica bandmates Lars Ulrich, James Hetfield, and Robert Trujillo and former Metallica bandmates Jason Newsted and the deceased Cliff Burton he was inducted into the Rock and Roll Hall of Fame.

In 2015 the musician lost his phone which contained 250 new "ideas" for Metallica's upcoming studio release. It wasn't backed up, and Hammett can only remember eight out of the 250 "ideas" he had.

Speaking about Hammett’s contribution to songs by other artists, he appeared on the ‘Kichigai’ E.P. by punk band Septic Death playing additional lead guitar. Also, he contributed to the track ‘Satan’ with ‘Orbital for the Spawn: The Album’ soundtrack released in July 1997. That time he was offered to appear on Pansy Division's song Headbanger from the EP ‘For Those About’ to Suck Cock Lookout Records in 1996.

After performing a set with Metallica at Bonnaroo in June 2008, Hammett played one song with My Morning Jacket and a couple of songs with the annual Superjam collaboration, which also included Les Claypool and members of Gogol Bordello playing primarily Tom Waits's songs.

Hammett is one of the main characters in Guitar Hero: Metallica, along with the rest of the current line-up of Metallica.

In 2011, Hammett appeared in an episode of Jon Benjamin Has a Van as an actor and guitarist.

Kirk Hammett’ net worth is evaluated at $200 million.

Besides music, Kirk Hammett has also tried out writing. So, he wrote a foreword to British author Joel Mclver’s book, ‘To Live is to Die: The Life and Death of Metallica’s Cliff Burton.’ In 2012, he released his first book, ‘Too Much Horror Business,’ which included a collection of photos detailing Hammett's lifelong love of monster movies and horror memorabilia.

In his life, Kirk Hammett has had two wives. His first marriage to Rebecca lasted three years and ended in 1990 during the recording of ‘The Black Album.’ In 1998 the musician tied the knot with Lani. The couple has two sons, Angel (b. September 29, 2006), and Vincenzo (b. June 28, 2008). He and his family live in a house in his hometown of San Francisco.

At the point of his life, Hammett was addicted to drugs. He reportedly spent a tremendous amount of money on buying them. According to his words in an interview, he started using drugs because he thought they would be fun. While on the Damaged Justice tour, the musician was addicted to cocaine. Shortly after he stopped consuming cocaine cause it made him feel depressed and began using the Load era. Remarkably, Hammett started reading comic books as he finds them to be more enjoyable (and healthier) alternative to drugs.

Hammett has also smoked heroin a few times, but "didn't like it."

Interestingly, Metallica prefers to stay away from politics. However, in 2016 Kirk Hammett expressed his fierce disagreement with U.S. President-elect Donald Trump's public pronouncements. Hammett supported the idea of fighting against global warming, which Donald Trump claimed a hoax.