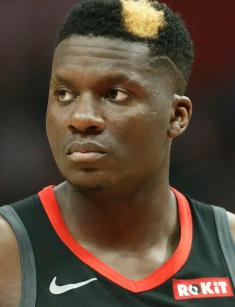 Clint N'Dumba Capela is a basketball player with a famous 7'5” wingspan who plays for the Houston Rockets. Capela is the best-paid athlete in the whole history of Switzerland.

Clint Capela was born in Switzerland in 1994. Soon after Capela was born, his parents separated, and a mother raised little Clint and his brothers on her own. When Cling was a child, he really liked soccer. However, one of his brothers offered him to change the type of sports because, at the age of 13, Cling was already 6' 3'' (1.9 m). Capela met Thabo Sefolosha, literally a basketball icon, and changed his mind. At the age of 15, he joined the training college INSEP located in France.

In 2012, Capela joined Pro A’s team Élan Chalon. Two years later, he represented his team at the Nike Hoop Summit. Also, in 2014, Clint was called the Best Young Player and Most Improved Player of that season.

In June 2014, Capela was chosen by the Houston Rockets in the NBA draft. Next month, he signed a contract with them. In March 2015, Clint scored his first NBA points. In April, he had the best game of the whole season and defeated the Charlotte Hornets. During the second season with the Rockets, Capela had his first double-double and 13 points in one game when his team won the Sacramento Kings. In 2016, he took part in the Rising Stars Challenge.

In November 2016, Clint scored 20 points during the game against the Utah Jazz, and later that month, he set a new career-high 21 points playing against the Portland Trail Blazers. In December, Capela was absent for six weeks because of his injury. Next season, in October–December 2017, he won over the Sacramento Kings, the Philadelphia 76ers, and the New Orleans Pelicans. Although he was involved in some trade talks with other teams, in July 2018, Capela signed an extension for $90 million with the Rockets. On the ESPN, in the Game Log Summary of the 2019/2020 season, it is written that Clint had 20 wins and 11 losses.

Speaking about his love life, there is no information about Capela seen with some lady. Apparently, he does not have a girlfriend for now. We are waiting for happy news!

Like lots of other athletes, Clint has his own clothing line on the website of the NBA. There you can find shoes, socks, and jerseys.

During his basketball career, Capela received several awards, including the Best Young Player Award in 2014 and the All-Defensive 1st Team Award in 2015.