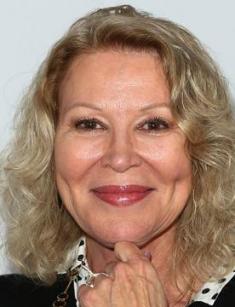 American actress Leslie Eileen Easterbrook appeared in a variety of movies and TV shows, but viewers remembered her for the role of Officer Callahan, a witty blonde, in the popular Police Academy movie series.

Leslie was born on July 29, 1949, in Los Angeles, but grew up in the countryside in Nebraska. The biological mother abandoned her after birth, but soon the girl was adopted by Carl and Helen Easterbrook. The adoptive parents raised the future actress in an atmosphere of love and care, and they treated Leslie as their own daughter.

From a young age, the parents tried to instill in Leslie a love for art. Her father could play the trumpet and was a music professor at the University of Nebraska at Kearney. In 1967, the girl graduated from Kearney High School and entered Stephens College in Colombia.

It was the adoptive father who played a significant role in developing Leslie’s artistic skills. He taught his daughter everything that he could, and they rehearsed together opera parts, Carl taught Leslie to play the trumpet. Father tried to teach her everything that he knew. The girl even performed in a school orchestra. Childhood with creative parents influenced Leslie's attitude towards art and determined the future.

Carl wanted his daughter to get a role in the comedy series Laverne & Shirley. His father's dreams came true; Leslie Easterbrook became famous as an actress in 1980 for the part of Rhonda Lee in this project. She played a neighbor of the title characters for three years.

Another early work of the actress was a small role in the comedy Just Tell Me What You Want. The director of the movie is famous Sidney Lumet, the winner of an Academy Honorary Award, as well as the prizes of the British Academy and the Berlin International Film Festival.

Before the resounding success, Leslie had played in movies of the 70s. In 1976, she appeared in the Broadway production of Neil Simon's play California Suite. Two years later, the actress starred in the original production of On the Twentieth Century. In the 80s, Leslie often participated in the panel game show, Match Game, and other popular TV shows.

In 1984, Easterbrook was featured on the television series The Dukes of Hazzard. The series focuses on Bo and Luke Duke, who earn for a living, transporting moonshine. Leslie Easterbrook rose to fame, playing the role of Sergeant Debbie Callahan in the crime comedy Police Academy, the first part of which was released in 1984.

This movie won the viewers’ hearts and incredible success worldwide. In 1986, people could enjoy the appearance of the blonde lieutenant again in the film Police Academy 3: Back In Training.

Beautiful and athletic Callahan quickly gained popularity. In the film, she played a cheeky girl who flirted with cadets. For the following years, the lieutenant continued her adventures in four movies of the Police Academy film series, in which Leslie’s character became Captain Callahan. Easterbrook did not appear only in the second installment of Police Academy.

The TV series Baywatch also was an important stage in the career of the actress. Drama lovers can see Easterbrook as Devlin Kowalski in the series Ryan's Hope. Despite the busy schedule, Leslie managed to participate in the dubbing of cartoons. Superhero fans know that she voiced character Mala in the TV series Superman and Batman: The Animated Series.

Thanks to excellent singing skills and musical education, the actress repeatedly participated in musicals and musical movies. Leslie became popular with fans of Broadway productions.

In the 2000s, Leslie continued to film. Her credentials mainly included crime and horror movies. The role in the film The Devil's Rejects in 2006 earned her the Best Supporting Actress award. The actress’s filmography is diverse, and she has starred in many movies and TV shows, having won the hearts of millions of people.

Leslie Easterbrook has been married twice. Victor Holchak became her first husband in 1979. But for some unknown reason, the marriage did not last long, and the couple soon separated.

A little later, the actress married again. Leslie's husband is screenwriter Dan Wilcox, with whom the actress lives happily ever after. The woman did not become a mother, and the couple does not have children.

Leslie Easterbrook can be called one of the most active American actresses, whose biography is very rich. Now almost every resident of the country recognizes her. Leslie's latest work is the role of Patty Frost in the remake of the movie Halloween.

Easterbrook is an in-demand Hollywood actress who is popular with directors. She leads an active social life and remains the favorite actress of millions of people. In 2018, 68-year-old Leslie Easterbrook is still a gorgeous and attractive woman.

Leslie Easterbrook has a net worth of $1.5 million.