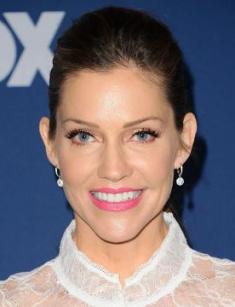 Canadian actress and model Tricia Helfer has made a brilliant career in both the modeling business and the film industry. She walked the runway for world-famous fashion designers: Giorgio Armani, Ralph Lauren, Gianni Versace. Viewers remember the star for the role of Cylon model Number Six in the cult TV series Battlestar Galactica. She got a toehold in the Hollywood Hills after the sensational movies Dark Blue, Lie to Me, and Lucifer.

Tricia Janine Helfer was born in the spring of 1974 in the sunniest Canadian province of Alberta. The future model spent her childhood and adolescence on the parents' grain farm. She grew up with three sisters. Tricia has German, English, Swedish and Norwegian ancestry.

A modeling agency scout discovered the young blue-eyed beauty when the 17-year-old girl and her friends came to the local cinema. Tricia accepted the stranger's offer to try her hand at the modeling business. So she began her career.

In 1992, Helfer won the Ford Models' Supermodel of the World contest. The victory was followed by the signing of a contract with the famous Elite Model Management. Soon Tricia Helfer who had long beautiful legs walked the runways at the fashion shows of the famous houses: Ralph Lauren, Chanel, and Giorgio Armani.

Very photogenic and sexy Tricia was adored by photographers. The model appeared on the covers of Elle, Playboy, and Maxim.

In 2002, Tricia Helfer quitted the modeling career, reserving the right to participate in promotions and choose advertised products. The same year, the young woman moved closer to the Dream Factory. At that time, Helfer managed to appear on television. In Canada, she hosted the Ooh La La TV show about the world of fashion and show business. Tricia liked working in front of the television camera, and she thought about an acting career.

The Canadian made her acting debut, playing the leading role of Sarah in the highly-rated post-apocalyptic series Jeremiah, featuring Luke Perry and J. Michael Straczynski. In 2002, the actress also starred in the episode “The Hunger Artist” of the police procedural CSI: Crime Scene Investigation.

Tricia Helfer became really famous in 2003 when two high-profile projects with her participation were released. These are the independent crime movie White Rush, in which she played the title character, Eva, and the science fiction drama Battlestar Galactica. While shooting in the science fiction project, Helfer produced and hosted the reality show Canada's Next Top Model in Canada.

In 2006, Tricia appeared in the Canadian mystical drama The Collector and starred in the American thriller Spiral, shot by Hollywood directors Adam Green and Joel Moore. The actress landed the role of Sasha. The same year, Helfer starred in the sequel to the sci-fi series about the battleship Galactica and the movie Walk All Over Me, in which she played Celene.

Tricia played a character named Carla in Matt Nix's action-drama series Burn Notice, aired on the USA Network in 2008 and 2009. At that time, American viewers watched in the animated series about Spider-Man, in which Helfer voiced Black Cat.

From 2009 to 2011, the Fox network broadcast the psychological detective Lie to Me, starring Tim Roth, which attracted the attention of millions of people. Viewers saw their favorite actress as beautiful Naomi in one of the episodes of the highly-rated project.

2010 was marked by the release of the action drama television series based on the Human Target comic book. It premiered in January on the Fox television channel. Tricia was also invited to play in the project.

The actress rode the next wave of fame in 2016 when the first season of the American project Lucifer, based on the comic books, was released. It premiered in January; in April, the producers who saw the high ratings of the series decided to renew it for the second season which consisted of 18 episodes.

The continuation was no less successful than the beginning, and in February 2017, executive producer Tom Kapinos announced the filming of the third season. In Lucifer, Tricia Helfer played the main antagonist of the second season, ordinary woman Charlotte Richards. The wife of God, who was exiled to hell occupied the body of Charlotte on Earth. In the third season, Richards is trying to get better and recall the past.

The model and actress met her future husband, Jonathan Marshall in 2002. A year later, their love affair turned into a magnificent wedding. Marshall is not involved in the film industry and show business; he is a successful lawyer.

The couple lived together for 14 years, but they did not have children. In the spring of 2017, rumors spread that the couple broke up. In January 2018, Marshall and Helfer announced a divorce. The lawyer and the movie star did not tell curious journalists about the reasons for the separation.

A few years ago, Tricia Helfer was severely damaged during a flight, when a piece of luggage was dropped on the actress's head. As a result, she has two artificial discs in the neck and four in the back.

In 2014, the Hollywood star starred in the commercial of PETA, which fights for the rights of animals and the ethical treatment of them. Tricia calls on cat owners to keep animals indoors.

On Helfer’s Instagram page, subscribers see dozens of photos of cats that the actress really adores, reaffirming her stance in the PETA video.

The Hollywood actress is still in demand. In 2017, Helfer appeared in two series: the comedy family melodrama Sun, Sand and Romance, directed by Mark Rosman, and the drama Bedtime Story.

Tricia Helfer has a net worth of $8 million.