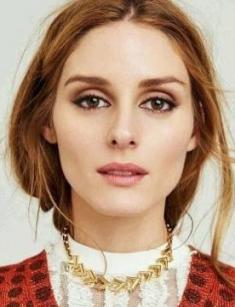 Olivia Palermo began the path to fame with participation in a reality show. Having won the love of the audience, the young woman proved herself as a model and designer and became an integral part of public events. Olivia broadcasts her lifestyle to millions of subscribers on social networks and serves as a style icon and role model for them.

Olivia was lucky to be born into a wealthy family in Manhattan, New York. Her birthday is on February 28, 1986. The girl inherited her Italian surname from her father, a businessman Douglas, who works in the construction industry. The girl's mother's name is Lynn, and the woman is a designer by profession. The childhood of the future model passed between New York and Connecticut.

After graduating from the prestigious private school St. Luke's School (Connecticut), Olivia went to Paris, where she attended the American University of Paris. She continued her studies at the New School, a private non-profit university located in Greenwich Village. A University with a hundred years of history, it specializes in culture, art, and social sciences.

When Olivia was 22 years old, she auditioned for The City, a famous American television show. Since then, Olivia gained popularity and opened a new page in the story of her life.

The City is a reality show that was broadcast on MTV from December 2008 to July 2010. The project was dedicated to young New Yorkers and was focused on their personal lives and professional achievements. Olivia became one of the protagonists, competing with Whitney Port. The show had average ratings and was often criticized for the fact that the storylines in it were written and directed with the script.

Nevertheless, for Olivia the project was the start in the show business world. According to the story, the girl worked for fashion designer Diane von Fürstenberg, and then went to Elle Magazine. Although Palermo had to show more acting skills than design professionalism, the talent agency Wilhelmina International offered her to launch her own brand in 2009.

At the same time, Olivia began her modeling career and appeared on the covers of glossy magazines. The pretty girl has a natural and innocent charm, so she looks like a girl next door dressed in street style. In 2010, Palermo showcased the autumn-winter collections of Mango and Hogan with her future husband, Johannes Huebl.

And in 2011, Olivia launched her own business. The whole team of professionals was working on her website dedicated to fashion, style, and beauty. It became an authoritative site with which famous brands were eager to cooperate. Advertising revenue made Olivia Palermo a successful and independent businesswoman, and now millions of people are learning from her how to pick up clothes and hair, what hairstyles are in fashion and what makeup to make before going to a party.

Successful and recognizable Palermo had become a welcome guest on television. She was invited in 2011 as an expert and judge in the long-playing TV show called Project Runway. Here novice designers compete with each other in the creation of clothing, and the jury weekly excludes the least fortunate. Olivia lit up in the 9th season of the project. As a guest star, she appeared in the British and Irish versions of the show Next Top Model, where she also played the role of a judge.

During those years, the woman developed her own recognizable style, which combines classic and freedom. Fancy, shouting, bright - it's not all about Olivia Palermo. The combination of basic good-quality things with accent details and expensive accessories help her to create fresh images for all times.

Many designers offer the style icon to collaborate. Whatever Palermo created in collaboration with eminent fashion designers. The list includes shoes, sunglasses, jewelry and bags, clothes, and nail polish. Among Olivia's partners are Banana Republic, Meli Melo, Aquazzura, Carrera y Carrera, and other brands. In 2017, Banana Republic announced the celebrity Ambassador of the company.

Olivia Palermo began dating her future husband in 2008, during the reality show The City. They met through mutual friends, and the guy was a colleague on the runway. Johannes Huebl moved to New York from Germany and made a brilliant career as a model and designer in America. The man is older than his wife for two years.

The story of love found a logical continuation in 2014. In June the couple had a wedding. The stylish newlyweds appeared in outfits of white color, and Olivia instead of a traditional dress preferred to wear a multilayered gas skirt by Carolina Herrera, adding a chaste, closed top with a long sleeve to the bottom. The bride's hair was gathered into an emphatically careless tail, while she was looking fresh and elegant on her main day.

For a quiet celebration the couple chose Bedford and invited only family and a few friends. Now the family lives in Brooklyn, New York, and yet has no plans about children.

Olivia continues to work on the site oliviapalermo.com, which brings a high income thanks to the steady flow of advertisers. It has been announced that the overall size of Olivia Palermo net worth today reaches $10 million. The blog on Instagram is also popular, and the number of subscribers stepped over $6 million in 2019.

Many of the publications are fresh, everyday images of the model, photos in a swimsuit, and pictures from social events that Olivia and her husband attend. The stylish couple chooses outfits to harmonize with each other. And this is another reason that they have become the favorites of the public.