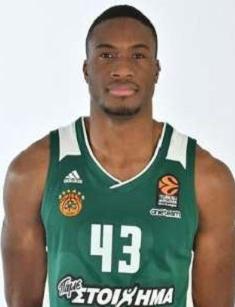 Born in Greece, Thanasis Antetokounmpo started his professional basketball career in Filathlitikos in 2012. Spent one season in NBA D-League, he was selected by New York Knicks on 2013 NBA Draft. After an unsuccessful attempt to gain a foothold in the association, Thanasis went to play in the European leagues.

He won all national tournaments in Greece and returned to NBA in summer 2019. He joined his brother Giannis in Milwaukee Bucks. Thanasis represents the national team of Greece. He plays at a small forward position. Player’s net worth is roughly estimated at $1million.

Thanasis was brought up and educated in Athens. His parents moved there from Lagos, Nigeria in 1991. They were professional sportsmen. They left their young son, Francis, with his grandparents. In Greece, the pair worked on farms, picking various fruits. Also, they sold necklaces and bags on the streets.

Soon Thanasis’s mother gave birth to him and his three brothers, Giannis, Kostas and Alex. Thanasis was the oldest. He often helped his parents to work on farms. All of the children spent most of their lives in Sepolia, a neighborhood north of the center of Athens. Unlike other city immigrants, Thanasis’s family never faced racism. However, they suffered paying their high rent. Once, they were evicted.

The brothers liked to go to a local basketball court. It was a place where Thanasis forgot about his problems, where he and his brothers forget that they couldn't afford clothes and even food. In 2007, the head coach of a local small club, Filathlitikos, invited Giannis and Thanasis to join the team.

The club agreed to pay their family a monthly stipend. It allowed Thanasis and Giannis not to work and to focus on playing basketball and training. Soon the family moved to an apartment near the club's gym. Thanasis started playing for junior teams in 2008. Took part in the fourth and third Greek divisions, he joined the Filathlitikos senior team in 2012.

Thanasis’s professional career started in 2012. He and Giannis played in the second Greek league. Thanasis showed rather good stats, scoring 12 points and five rebounds on average per game. It allowed him to enter the Greek All-Star weekend and to compete in the slam dunk contest.

Spent one season in Greece, Thanasis and Giannis declared for the 2013 Draft. However, Thanasis reversed the decision. Thanasis’s agent reported that the player had several offers from Italy, Spain, and NBA D-League. Spent four games in Filathlitikos, he decided to go to the USA.

Thanasis became the ninth on 2013 NBDL Draft. Spent 50 games in Delaware Blue Coats, he went on 2014 NBA Draft. In 2014 the New York Knicks went from having no draft picks to having two, and they used their second on Thanasis, who got the 51st number. He was expected to be a solid defender with a seven-foot wingspan. He was not a polished offensive player, so he needed to develop there, but at just 21 years old, he had plenty of time.

Thanasis’s NBA career was like a roller coaster. He joined the Knicks for 2014 Summer League. Two months later he moved to the Knicks’ affiliate to Westchester. Spent one season there, Thanasis reunited with Knick in summer 2015. As a result, he signed a two-year $1.4 million contract, which was waived by the club on October 23, 2015.

Thanasis returned to Westchester, where he spent the season 2015-16, taking a break for two games for Knicks in January. He played a total six minutes and scored three points, according to basketball reference.

Thanasis found his place in the best domestic league of Europe, the Spanish Liga Endesa, as a member of Andorra. He helped to his team to get into playoffs. He was recognized as the MSP of the season. During the award ceremony, he jokingly said:

“I was disappointed at first for not winning the MVP award, but on the other hand being mister spectacular is like being mister fantastic”.

Being a member of one of the most titled European club, Antetokounmpo won all personal awards and national tournaments without problems. He got the MVP and MSP, participated in All-Star Game and won the championship twice.

On July 7, 2019, it became known that Thanasis Antetokounmpo reached an agreement with the Milwaukee Bucks on a two-year contract and would play alongside his brother, reigning NBA MVP Giannis Antetokounmpo.

According to The Athletic, the deal was worth $3.15 million, including $3.15 million guaranteed, and an annual average salary of $1.5 million. It was unlikely that the Thanasis’s signing with the Bucks would play a significant role on Giannis and Co., who were considered to be a legitimate championship contender with one of the league's deepest rosters heading into 2019-20 season.

Thanasis returned to the NBA just a few days after the brothers opened the AntetokounBros Academy in Athens for youth basketball players. Another brother, Kostas, is a player of the Dallas Mavericks. He was selected on 2018 Draft, after one season in college.

Having roots in Nigeria, Thanasis had an opportunity to choose what national team he wants to represent. In May 2016, he received a selection to Nigerian roster for 2016 Olympics. Thanasis rejected the invitation and joined his brother in the national team of Greece. However, they lost the qualifying tournament.

Thanasis played for Greece in 2017 EuroBasket, where he got the nickname of “Elevator”. Watched his highlights, everybody will understand why he got such name. In February 2019, Thanasis helped the team to qualify for the 2019 World Cup.

Thanasis received his Greek citizenship only in 2013. His father died at the age of 53. Charles died from a suspected heart attack in Milwaukee. The funeral was held in the US. In July 2019, Antetokounmpo brothers launched a program to provide basketball and life skills to underprivileged children in Greece.

The AntetokounBros Academy - created in collaboration with Eurohoops, the Onassis Foundation, and Nike - is a two-year scholarship project for children aged 12 to 16 that will be held on courts in the Athens districts of Ampelokipoi, Lamprini, and Ellinoroson.