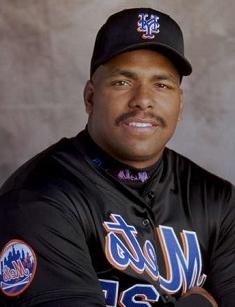 Roberto Martin Antonio Bonilla is a former player in Major League Baseball with a 16 year career. Bonilla is considered to be one of the wealthiest athletes in the world.

Bobby Bonilla was born in The Bronx, New York, USA. He belongs to Afro-American ethnicity. His father, Roberto Sr., was an electrician. Regina, his mother, worked as a psychologist. His parents split up when Bobby was eight years old. He, his twin sisters and his brother were brought up by their mother. After his father left the family, Bonilla often saw him, because they lived not far from each other.

In 1981 Bobby finished Herbert H. Lehman High School. From an early age, he had a big potential for sport, but because of the financial problems Bobby had no opportunity to attend training regularly and to play baseball enough. His parents tried to show the difficulties of their work to the boy. Without a doubt, he wanted a better life for himself and his family, so he decided to do his best in sports.

The professional baseball career of Bobby Bonilla lasted for 16 years. He played for the Florida Marlins team that became the winner of the 1997 World Series. The talented player showed excellent results during the 1991 MLB season and took part in six MLB All-Star Games. Bonilla succeeded to win three Silver Slugger Awards.

Since 1992 till 1994, Bobby was considered to be the highest-paid player in the major leagues. His salary totaled over $6 million per year.

An interesting fact is that Bobby gets his money on the 1st of July each year. This day was even named after him: "Bobby Bonilla Day."

Since 2011, the player has been paid over $1.19 million by the New York Mets each year. After the Mets released Bonilla before the 2000 season they owned him payments for the final year of his contract. It is ridiculous, but the deal expires only in 2035, at which point Bonilla will have been paid $29.8 million for a season in which he did not even play for the Mets. The sports agent, Dennis Gilbert, who was also Bonilla's house agent, negotiated the contract for the player. Gilbert made it work and gave him income all the way through age 65.

It's known that even Bryce Harper’s contract, that will run through 2031, is shorter than Mets’ Bobby Bonilla deal. It means that the New York Mets will still be paying Bobby Bonilla for four more years after Harper’s deal finishes.

In 1987 Bonilla became the Pittsburgh Pirates member in the position of a third baseman. Later he was moved by the manager Jim Leyland to right field. In this position Bonilla alongside baseball stars Barry Bonds and Andy Van Slyke formed a perfect combination. From 1990 to 1992, the team managed to move the Pittsburgh Pirates forward to earn two of their three straight National League Eastern Division titles.

From 1986 to 1991, Bonilla successfully demonstrated his talent and skills in baseball. He led the league in extra base hits in 1990, and in doubles in 1991. The player also helped to get four All-Star titles for the team. On October 28, 1991, Bonilla became a free agent.

On July 28, 1995, Bobby was acquired along with a player Jimmy Williams by the Baltimore Orioles from the Mets in exchange for Damon Buford and Alex Ochoa. He performed well promoting the Orioles to the American League Championship Series in 1996.

On May 14, 1998, the baseball star was traded to the Los Angeles Dodgers in exchange for Mike Piazza and Todd Zeile. However, his level of play was underestimated, and Bonilla was bounced to the Mets for the player Mel Rojas after the season.

During this period, the player could not boast of excellent results. In 2000, Bobby signed a contract with the Braves. The team won their ninth straight division title. However, for Bobby, it was the season with uneventful 114 games.

In 2001, at age 38, the player was signed by the St. Louis Cardinals. Unfortunately, Bonilla suffered several injuries that reduced his playing time. He played in 93 games for the team.

On October 7, 2001 the baseball legend appeared in his final game and finished the season. Injuries became the main reason for leaving. It was widely believed that during that time when Bobby began to lose ground, there was a free spot for a newcomer Albert Pujols who was waiting to occupy the place in the team. According to La Russa, he and the rest of Cardinals management were impressed enough by Pujols that they decided to promote him to the big league club even before Bonilla's injury.

Despite this, the achievements of Bobby Bonilla in baseball are very high. The player ended his career with one championship and six All-Star appearances.

Bobby Bonilla invests large amounts of his earnings in donations. In February 1992, Bonilla and his wife organized the charity named the Bobby and Millie Bonilla Public School Fund with $35,000 contribution. Their foundation helps and supports different educational institutions which he and his wife attend.

The sportsman is engaged in other charity work. He invests money to Players Trust All-Star Golf Tournament, which was formed by Dave Winfield and Joe Mauer in 2014.

As for today, the sportsman is single. He was married to Madiglia "Millie" Bonilla. The couple became acquainted during the studies at Herbert Lehman High School in The Bronx. They got engaged in the late 1980s and had two children together. Bonilla and Madiglia split up in 2009.

Bonilla is one of the richest Baseball players. The net worth of the player is estimated at $27 million. All his earnings come from his sports career.

Bobby is not a social media person; he has no Instagram or Twitter. But he had a chance to show the unique side of his personality. The player had some minor success as an actor. Along with Bonds and Pedro Guerrero he starred in the 1993 baseball movie Rookie of the Year. He also was seen in several television series and shows.

As every popular athlete, Bobby's baseball cards are highly popular among his fans. The most expensive Bobby Bonilla Baseball Rookie Card was sold on eBay in December 2014 for $36.99.