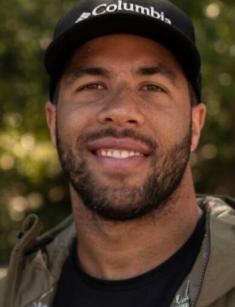 Bubba Wallace, whose real name is William Darrell Wallace Jr., is an Alabama-native racer. He was born on the 8th of October, 1993. William is of American nationality and mixed ethnicity. He has a strong belief in Catholicism.

William was raised in Concord, North Carolina, and was born in Mobile, Alabama. He attended Northwest Cabarrus High School. He is the son of Darrell Wallace Sr. and Desiree Wallace, who was born to a black mother and a white father. His mother is a social worker who competed in track at the University of Tennessee, and his father owns an industrial cleaning business.

At the age of nine, William began competing in local late model races as well as the Bandolero and Legends car racing series. He won 35 of the 48 Bandolero Series contests run in 2005, and at Virginia's Franklin County Speedway in 2008, he set a record for the youngest driver to win.

William started taking part in the NASCAR K&N Pro Series East, a local and developmental series, in 2010. He was the first African American to get the NASCAR Series Rookie of the Year honor. In 2011, William won three races—at Richmond International Raceway, Columbus Motor Speedway, and Dover International Speedway—and finished second in the points standings to Max Gresham.

For the 2012 season, William switched to competing directly for Joe Gibbs Racing. William earned his first victory with JGR by winning the second Eastern race of the season at Greenville-Pickens Speedway. He competed in the whole K&N East Series season as well as four to six Nationwide Series events.

William made his debut in a national series in the Xfinity Series at Iowa Speedway in late May while driving the No. 20 Dollar General Toyota for JGR. He finished ninth after spending most of the race inside the top ten. Wallace won his first Nationwide Series pole at Dover International Speedway in late September after finishing in the top ten in his previous two appearances.

William placed sixth in the first race of the year at Daytona. He slid to 11th place in the standings, but at Dover International Speedway, he scored his best career result by coming in second to the overpowering Erik Jones and qualifying for the first Xfinity Series chase. He advanced to the round of eight at Phoenix before being eliminated during the sixth race.

It was announced in February 2013 that William would compete in the Camping World Truck Series for the whole season in the No. 54 Toyota driven by Kyle Busch Motorsports. William had unintentional contact with Ron Hornaday Jr. at Rockingham Speedway in April. When Hornaday turned under a caution flag, William's vehicle struck the outside wall.

William joined Spencer Davis Motorsports in March 2021 and will be driving their No. 11 in the Pinty's Dirt Truck Race on the dirt track at Bristol Motor Speedway. The truck was entered into this event in cooperation with Hattori Racing Enterprises. He came in eleventh place overall.

William will be the first African-American to compete in the Cup Series since Bill Lester in 2006 when Richard Petty Motorsports announced intentions to have him take Aric Almirola's injured No. 43 Ford seat. He was able to make it to the second round of qualifying for his Cup debut at the Pocono 400 and start 16th.

William said in 2019 that he had struggled with depression for the whole of his racing career and still does. He was the focus of the Netflix documentary series Race: Bubba Wallace in 2022. During the 2020 and 2021 seasons, the six-episode series explores Wallace's career, including his activist work and off-track life.

William is happily married to his longtime girlfriend Amanda Carter. They have beend dating during 5 years and in 2021 he proposed to her.