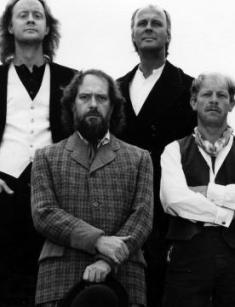 Many years ago, the musician Ian Anderson organized the group Jethro Tull that performed blues-rock songs. Since that time, the band has changed styles and genres and presented about 30 studio albums; it was named one of the bestselling and eccentric British projects according to Rolling Stone.

In 2014, the frontman announced the end of his career, but the musicians gathered together to celebrate the project’s 50th birthday by the large international event: Ian Anderson Presents: JETHRO TULL – 50th Anniversary Tour.

In 1963, the middle-school students Ian Anderson, Jeffrey Hammond, and John Evan were so inspired by The Beatles that they decided to organize their own project made of two guitarists and a drummer. The young men bought the instruments and started rehearsing; they took popular tunes from blues songs of that period.

The group’s original name was The Blades. The trio performed in local clubs; the drummer Barrie Barlow and the guitar players Mike Stephens and Chris Riley joined them later. The new friends renamed the band into John Evan Band. The agent John Taylor helped them get hired in various North-West England clubs; the artists also recorded three songs in Regent Sound Studios.

Hammond participated in several concerts and quitted to enter a school of arts; the bassist Glenn Cornick replaced him. Riley left, too, and Ian invited Neil Smith instead. John Evan Band debuted on the stage of the famous London club The Marquee and realized it was time to leave the province and get closer to the center of the country.

In 1967, the young musicians took the next step in their career: they moved to Luton. Due to the financial ordeals, the group split up; Anderson, Cornick, and a new guitarist, Mick Abrahams, founded another blues project. The drummer Clive Bunker joined them soon.

As it turned out, London was full of such groups, and it was difficult for the artists to organize shows. To look new, Anderson and his team changed their name every week: Navy Blue, Ian Henderson Bag o' Nails, and Candy Colored Rain. Their performances were mediocre, and there were few chances to appear in the same club. One day, the young men were lucky, though: they introduced themselves as Jethro Tull and got permanent employment.

In 1968, the band recorded the double single “Sunshine Day" - "Aeroplane” and reunited with the bassist Jeffrey Hammond. Anderson was disappointed in his guitar skills and switched to the flute; it became his trademark along with a long, warm coat. This image appeared in Jethro Tull’s logo.

After the debuting album release in December 1968, the frontman Abrahams realized he wanted to play different music; he would not endure the upcoming busy tour. The musician left Jethro Tull: “I was fed up with all the nonsense”. He founded his own group, Blodwyn Pig.

Looking for a new guitarist was long enough. David O’List who had quitted The Nice, the ex-member of John Mayall & Bluesbreakers Mick Taylor, and Tony Iommi who later gathered together Black Sabbath were the candidates. Eventually, the group selected Martin Barre: his skills were perfect for Anderson’s style and music manner. In 1970, when the band needed a keyboard player, Ian persuaded John Evan to come back and participate in tours and new albums.

The situation seemed to get balanced, but the bassist Glenn Cornick suddenly left in the middle of the tour supporting Benefit; he explained it by character incompatibility. The former member Jeffrey Hammond took his place: although he had lost some instrument skills without practice, he was suitable to Anderson’s spirit and communication style.

Jefferey did not spend much time with his friends, though. In 1975, he preferred painting to music, and the flamenco virtuoso John Glascock came to his place; besides, Glascock performed as the second vocalist. In 1979, the new group member suddenly died during the tour in Great Britain and the USA because of health issues.

The frequent changes in the band’s style determined other musicians’ participation; the old ones left. 1980 was marked with the last changes: Barlow, Cornick, and Evan left Anderson, and the frontman continued to collaborate with the bass guitar player Dave Pegg, the guitarist Martin Barre, and the drummer Doane Perry.

In January 2002, the original members including Anderson, Abrahams, Cornick, and Bunker reunited to have a one-time show in an English pub; it was recorded on DVD. It was the first and the only time the old Jethro Tull gathered together and played the hits created during the last 40 years.

Jethro Tull had the first breakthrough performance at the Sunbury-on-Thames festival: the audience and media welcomed them enthusiastically. The success encouraged the young men to create the album This Was that entered the top ten discs in British and American charts. In addition to the original sings, the cover version “Cat’s Squirrel” appeared; it beautifully emphasized Abrahams’s blues riffing. The jazz composition “Serenade to a Cuckoo” showed Anderson’s talent as a flute player.

The concerts supporting Jimi Hendrix in Scandinavia and collaboration shows with Led Zeppelin and Vanilla Fudge in the USA gave the opportunity to present the new works. The group recorded the single “Living in the Past” that became number three in Great Britain.

The new album, Stand Up, helped reach the peak of music charts. It came out in September 1969 and pictured the woodcut photos of the artists on the cover. Anderson wrote all the material except for the jazz arrangement of the organ song “Bourrée”; Jethro Tull’s blues period stopped.

The new sounding was defined as progressive rock. Inspired by the success of “We Used to Know” and “Nothing Is Easy” Ian wrote several popular singles. The artists appeared in the TV show Top of the Pops and recorded the album Benefit that brought thousands of new fans and full stadiums. August 1970 marked one of the most significant shows at the Isle of Wight festival; it was even larger than Woodstock.

At the end of 1970, Jethro Tull pleased their fans with the album Aqualung notable for the hit “Locomotive Breath”. Anderson was afraid the new music would be too radical in comparison with the previous collections, yet his doubts were groundless: the masterpiece was one of the top ten albums in America and received the RIAA gold disc status. Still, critics called Aqualung too conceptual which offended the frontman: he believed his own songs were unique and diverse. In return, Anderson created a suite that combined sophisticated music ideas and humor; it lasted 43 minutes and took two sides of the new disc, Thick as a Brick.

In 1972, Jethro Tull was named the most important progressive-rock group of the second generation. They took a break and presented a collection of singles, B sides, and outtakes so that fans could get acquainted with the early opuses of Anderson’s team. The musicians’ popularity increased; the following albums A Passion Play (1973), War Child (1974), and Minstrel in the Gallery (1975) were commercially successful.

In the late 1970s, the band took an interest in folk rock and presented three albums inspired by Fairport Convention: Songs from the Wood (1977), Heavy Horses (1978), and Stormwatch (1979). Once again, critics’ reviews were favorable; the artists had a large tour in Europe.

In the 1980s, the group recorded the disc A and started making music videos with staged scenes and live concert cuts. At the same time, they were working on the new sounding with electro instruments and programmed rhythm sections. The album Under Wraps showed the results; the tracks “Lap of Luxury” and “Automotive Engineering” were immensely popular. Later on, the composer and soloist Anderson had some voice issues, and the artists took a break for three years.

As Jethro Tull came back, they won the Grammy Award for Best Hard Rock/Metal Performance Vocal or Instrumental and released the collection 20 Years of Jethro Tull, as well as Crest of a Knave, Rock Island, and Catfish Rising. The latter album was the comeback to blues accompanied by the mandolin, acoustic guitar, and, of course, flute.

In 2011, Ian Anderson announced the end of the project, but the next year brought the solo album Thick as a Brick 2: Whatever Happened to Gerald Bostock? The former group members, the bassist David Goodier and the keyboard player John O’Hara, contributed to it.

In 2017, Ian Anderson, John O’Hara, David Goodier, Florian Opahle, and Scott Hammond organized Jethro Tull by Ian Anderson; they aimed at earning the previous popularity and giving concerts timed to the anniversary of the band from Blackpool.

Jethro Tull 50th Anniversary Tour started in Aalborg, Denmark. In 2019, the shows will be held in European counties (Germany, Italy, Belgium, etc.) and the United States. One can find the latest news about the concerts on the group’s official website and social networks, such as Instagram.