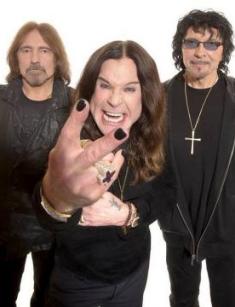 Black Sabbath is part of the Big Three Hard Rock Bands (along with Led Zeppelin and Deep Purple), the beloved offspring of Ozzy Osbourne, "The Prince of Darkness." The followers of heavy metal were praying for the members of the rock band for almost half of the century. Despite the dark style of music and the appearance of the musicians themselves, the songs of Black Sabbath will always be full of youth and life, that is their harmonious nature, as was noted by many journalists and critics.

The British rock band Black Sabbath is composed of four friends from Birmingham. The future lead singer John Michael Osbourne studied in the same school, but in different years with the "father of heavy metal" Frank Anthony Iommi (aka Tony Iommi) and bassist Terence Michael Joseph Butler, who got the nickname "Geezer." Drummer William (Bill) Thomas Ward played in the same band with Tony, while Ozzy and Butler had their own group.

At first, the guys changed the name of their band as often as their socks. The new group at first was associated with the label of the women's powder The Polka Tulk Blues Band, then the name was shortened to the first two words, and later it was changed to Earth. In order not to create troubles with an already existing band under the same name, the group chose the name Black Sabbath, as it was the name of a song previously written by them.

The "great and terrible" Osborne was expelled from the group in the late '70s. According to guitarist Tony Iommi, the musicians "took drugs, cocaine, a lot of things, but Ozzy was also drinking constantly." The solo career of the musician was more than successful, but in an interview with Billboard, Ozzy said he was ready to return to Black Sabbath on the first call. And then the manager brought Ronnie James Dio to replace him.

Later, Geezer left and returned again. Ward, who was coping with the death of his parents, was always under the influence. This became the reason for firing him in 1980. Vinny Appice replaced him for a short period. The drummer left the band four more times.

Ian Gillan and Tony Martin, Glenn Hughes, and Brian May, Robert Halford and Beverley Bevan have tried themselves as members of Black Sabbath. In 2011, members of the golden line-up Ozzy Osbourne, Tony Iommi, Geezer Butler, and Bill Ward announced the reunion of the group and began joint rehearsals.

According to the legend, the idea to praise other worlds, delirium and evil creatures came to Iommi. Tony decided that if people liked horror movies, they should try singing "horror" songs. Butler's interest in philosophy, religion, and fantasy turned out to be useful, as they were reflected in the music.

The first single, Evil Woman did not enjoy a lot of attention. The album Black Sabbath that was released a month later immediately took the highest positions in all sorts of charts. The band went on a concert tour in Europe. The material collected on the tour was enough to record the album Paranoid in a week.

The shocking image of the band members (everyone remembers the water tap around the neck of Ozzy Osbourne as a necklace) that sometimes frightened the unaccustomed audience, and their unique style started developing gradually: even performing ballads, musicians avoided love lyrics and expression of other sublime and tender feelings.

The mid-70s – the period of peak popularity of Black Sabbath. The group pleased fans with a new record each year, and albums were breaking all sales records. However, the race for recognition and commercial success affected the health of performers: everyone except Ozzy went to hospital. The musicians took a break for the first time.

In 1972, Black Sabbath Vol.4 was released. The band gave a series of concerts in America and Australia in support if the album. The next record, Sabbath Bloody Sabbath, finally received positive reviews in a professional environment. Surprisingly, the opinion of music critics about the work of the rockers was the opposite of the position of the fan community.

In May of 1978, came out the studio album Never Say Die! and it became the last one with the participation of Ozzy Osbourne before he was excluded from the band for a long time. The constant replacement of the members continued until 1997. This year, the group managed to record a couple of shows, songs which formed the basis of the collection Reunion.

Despite all of these exclusions and comebacks of the participants and their solo projects, on behalf of Black Sabbath were released a dozen albums, both studio and live. In 2006 the group was inducted into the Rock' n ' Roll Hall of Fame, and the year before - into the British Music Hall Of Fame. There were press reports that raised the question of the revival of the band, but the musicians each time denied the rumors. At one time, Tony was even the only "original" member of Black Sabbath.

At the end of 2011, there was excellent news for the fans of heavy metal. Black Sabbath gave a press conference at the Los Angeles club Whisky A Go Go, on the stage of which the musicians performed for the first time back in 1970. The band announced the reunion.

Session members of the group, who accompanied the legends of rock at concerts and were twice as young as them, were amazed at their performance and ability to keep the rhythm for several hours. Drummer Tommy Clufetos noted that "the youth secret of these fine people lies in the desire to give work to the people."

In May 2013, they planned a concert at the Moscow Olympic games as part of a farewell world tour. But the performance did not take place because of Tony's disease; he was diagnosed with cancer of the lymphatic system. After Iommi's remission, musicians continued to tour in support of their studio album called 13.

The record has become a valuable subject of collections of music lovers only because it was the first in the last 35 years of existence of Black Sabbath. In an interview with Toronto Sun, Osborne was glad that he was wrong, considering Never Say Die! latest album:

"Now I'm never going to say 'never,' and I don't mind the new album at all when I'm asked about the sequel to 13. If we don't extend the preparation for the new record for another couple of hundred years, I'll say it again - I'm in business with you guys and not against the new Black Sabbath album."

This album, as well as concerts in support of it, were held without the participation of drummer Bill Ward. Ozzy Osborne said that his colleague was overweight:

"The drummer has to be in shape. He's already had two heart attacks. I don't want to be responsible for his life."

The farewell concert in Russia took place in the summer of 2016. According to the stories of those present, the audience was in heaven with happiness. The playlist consisted of songs written in the first 20 years of the biography of Black Sabbath. The composition "Black Sabbath" opened the performance, and in the end, the guys performed the song "Paranoid."

Another rock legend, Megadeth, tried to get a Grammy with a cover of the song. The hit was covered by glam rockers Mötley Crüe and the German power metal band Mystic Prophecy, the founders of the gothic metal genre Type O Negative and the British trio The Meteors.

As a farewell, Black Sabbath presented the album with the resonant name The End. The playlist included previously unreleased songs, as well as live recordings of songs from the albums 13 and Vol.4.

To keep loyal fans informed about the final concerts of The End Tour of their favorites, the schedule of performances and additional information were published on the official website. There, the guys also released video clip and news related to the members of the band and their activity.

The final show was held in native Birmingham for musicians at the NEC Arena. Black Sabbath played 15 songs, including classics such as "Children of the Grave," "Iron Man" and "War Pigs."

In March 2017, the famous British tabloid New Musical Express published a kind of obituary with the image of the purple logo "Black Sabbath 1968 – 2017", which was another confirmation of the news about the final break-up of the group.

In 2017 the record label BMG released the box set The Ten Year War, which consisted of the songs of Black Sabbath, a book about the band, and a flash drive in the shape of a cross. In 2018, the company decided to repeat the experience and announced the release of a vinyl box set with rare singles in June.