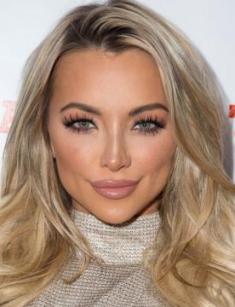 Lindsey Pelas is an American model and Instagram star, who attracts attention with an unusual appearance. The fact is that the woman has natural 30HH boobs. However, Lindsey admits that such a generous gift brings her not only the admiration and love of her fans but also serious inconvenience.

Lindsey Pelas was born in Loranger, Louisiana, on May 19, 1991. The future model was lucky to grow up in a large and friendly family. Lindsey has three brothers and five sisters.

In her childhood and youth, Pelas could not even think that her appearance would help her to become famous, although she has always enjoyed posing for a photo and, like many girls, dreamed of becoming a model.

However, Lindsey's parents insisted that their daughter receive a good education. So, after graduating from high school, the curvy blonde first studied at college and then obtained a bachelor's degree in History from Louisiana State University.

As a student, Lindsey posed for local magazines and even managed to make a portfolio, but it was not real glory. To earn money, the girl had to work as a yoga instructor, salesperson, and even bartender. But soon, Pelas started a new chapter in her life.

In 2013, Lindsey's friend advised the girl jokingly to attend the casting of the Playboy cult magazine. Pelas liked this idea, and she decided to try her luck. After a while, Lindsey’s photos appeared on the pages of Playboy. This photo session turned out to be a turning point in her career. Soon Lindsey was showered with offers of advertising agents and fashion magazines.

While shooting for magazines and posters, the woman began to promote her own Instagram page. Gradually, she attracted more and more fans and subscribers, and a year later, Lindsey Pelas was already included in various lists of the sexiest girls in the world.

On social media, fans admire not only photos of the model. Lindsey also posts videos of her training, talking about practical exercises and complex workouts. Besides, Lindsey Pelas often plays in the music videos of famous singers. One of the most popular videos was the song of the rapper Fitty Smallz, in which the model appeared together with other sexy ladies.

Despite the magnificent breasts, Lindsey’s figure can be called slim. The woman is 5.25 ft. (160 cm) tall. The model says that the small waist and six-pack abs are the results of exercises. Lindsey trains at the gym five days a week, combining cardio and strength training. Besides, Pelas advises girls to be in the fresh air and not to neglect walking.

To diversify training strategies, Lindsey Pelas included pilates, yoga, cycling, and swimming in her program. Besides, the model emphasizes in interviews that she leads a healthy lifestyle and sticks to a healthy diet. According to Lindsey, to take care of body shape and appearance is also a profession.

The model is constantly accused of plastic surgery. Lindsey admits that she gets used to such attacks and does not pay attention to them. In fact, the woman has large natural breasts. Pelas even complains of back pain due to impressive bra size. Besides, the woman is constantly experiencing difficulties choosing underwear and other things, because small sizes of clothes are not designed for such amazing big boobs.

Lindsey also complains that she can't buy things she likes. If Pelas shows off the cleavage, it can look vulgar. However, despite the rumors, the woman does not plan to get rid of the generous gift from nature.

Lindsey Pelas’s personal life is no less interesting than her appearance. The curvy blonde is not married, but information about the model’s love affairs periodically appears in the press. So, Dan Bilzerian, a professional poker player, was one of the beautiful lady’s boyfriends. At first, it seemed that these relations were ideal, but after a while, the couple broke up. Neither Lindsey nor Dan commented on the reasons for the breakup.

In 2016, Lindsey Pelas appeared together with TV host Calum Best. Lindsey also prefers not to tell reporters the details of this relationship, but fans hope to learn the news about the couple's upcoming wedding.

In her spare time, Lindsey Pelas likes to stay at home and watch TV shows. By her own admission, she does not like noisy parties. The model’s soft place is shoes. Pelas has an impressive collection of tennis shoes and luxurious evening pumps.

In 2018, Lindsey Pelas pleased fans with an unexpected gift. The woman took 12 pictures for her calendar. The publication was titled "Nearly Naked." Indeed, the beauty was almost naked in each image. The model admits that she is looking forward to the next photo shoot for the 2019 calendar.

Nowadays, Lindsey Pelas is one of the most in-demand models. The woman often shares the details of her life and career on Instagram and Twitter, delighting subscribers with new sexy photos.

At present, Lindsey's net worth is estimated at $3 million.