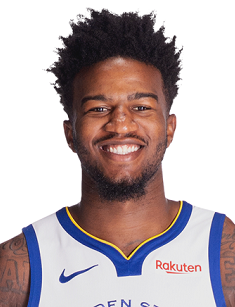 Born in Los Angeles, Jordan Bell started a basketball career in NBA in 2017. Chicago Bulls drafted him, but the club traded him to Golden State Warriors at the same night. Bell became the NBA Champion in his first year. He was playing for Warriors in 2017 – 2019. On July 1, 2019, he signed with Minnesota Timberwolves. Bell plays at a power forward and center positions. As of July 2019, his career high is 20 points and 13 rebounds. He has a net worth of $3 million, including all of his properties and earnings.

The birthplace of Bell is California. He appeared on January 7, 1995. Spent all of his childhood in his native city, Jordan started playing basketball at high school. He managed to develop a reputation of a prolific shot blocker with his long frame and terrific vertical jump.

His senior year at Long Beach Poly was his best season in stats. Thanks to his height, he scored 13.6 points, 9.2 rebounds and outstanding 4.8 blocks on the average per game. Jordan dominated in defense. The young talent was named one of the best junior players, along with notable Joel Embiid and Tyler Ennis.

In 2013 Jordan enrolled at the University of Oregon, where he joined Oregon Ducks. In his first season, Jordan set a Ducks’ record in a total number of blocks in a season. He made 94 blocks. Also, in his four-year college career, Bell helped the team to get into NCAA Final Four, the university’s first appearance since 1939.

Awarded by the Pac-12 for the best game in defense, Bell set an Oregon career record with 235 blocks completed. He also finished with a .610 field-goal percentage, best all-time for the Ducks. In 2017 Jordan decided to go on the NBA Draft. Then he posted on Twitter:

”Oregon has become my home. I’ve gained lifelong friends and made unforgettable memories here. After talking it over with my family and friends, I have decided now is the best time for me to pursue my dream of playing in the NBA.”

Chicago Bulls selected Jordan at No.38 on 2017 Draft. Bell’s trade happened immediately. He moved to Warriors in exchange for $3.5 million. It took Jordan all of 60 seconds to learn an important rule attached to his newest team: Watch what you say or you might just go viral. Moments after Bell was selected by the Bulls 38th overall, he announced to his gathered friends and family at a Southern California home that he’d been traded to the Warriors. They went crazy.

Video of the moment was snapped. About halfway through the celebration, you could hear Bell, after someone whispered in his ear, repeating a few times: “F*** Bron Bron,” referring to LeBron James. The clip was snatched up by the blogosphere. Just weeks after the Finals ended, it produced the needed juice, a Warrior rookie calling out the King.

Bell started good in Warriors. He rapidly began appearing in starting five, because Draymond Green got knee injury. By January 2018, Bell had earned several career highs, helping the Warriors off the bench. On January 17 Jordan left the game against the Bulls in a wheelchair after landing awkwardly on his left leg after trying to contest a dunk. Bulls center Robin Lopez had the ball at the three-point line before driving in the paint for a dunk attempt.

Bell came into the lane to contest the dunk but failed to stop Lopez. Bell came down awkwardly on just his left leg and then stayed on the ground for a few minutes before leaving the court in a wheelchair. Jordan missed some games because of injury, but in April made his playoffs debut. In his rookie season, he won a championship ring.

According to basketball reference, Bell ended his rookie season with 74 appearances in regular season and playoffs, scoring 3.5 points and 3.2 rebounds on average per game. In 2018-19 season Bell played less time. In March 2019 GSW suspended him for a game. However, in June he participated in his second NBA Finals.

After two rocky seasons with the Warriors, Jordan moved to Minnesota as a free agent. He agreed to a guaranteed contract with the Timberwolves on July 1, 2019, and the Warriors decided not to match the offer, allowing Bell to leave. He said his farewell to the Warriors and DubNation with a lengthy post on Instagram. He wrote:

“My time with the Warriors was probably one of the biggest chapters of my life thus far. I am extremely grateful for the opportunity I had to be a part of this organization. I couldn’t have asked for a better team (teammates, front office, and everyone in between). Thank you! To the YAY AREA, thank you for showing me nothing but love during my time in the Bay. As I begin my new chapter, I will never forget my time here. Thank you Dubnation!”

Bell was among the many roster casualties in the wake of KD joining the Nets. With the Warriors acquired D'Angelo Russell in a sign-and-trade with the Nets, they were hard-capped. Along with Bell, GSW had parted ways with Damian Jones, Andre Iguodala, and Quinn Cook. Center DeMarcus Cousins was not retained in free agency.

Bell is dating his college sweetheart Carissa West, and she is from California too. She is currently studying human physiology at the university, where Jordan spent his college basketball career. Though Bell’s girlfriend has her own busy life, she tries to attend as many of Bell’s hometown games as possible.