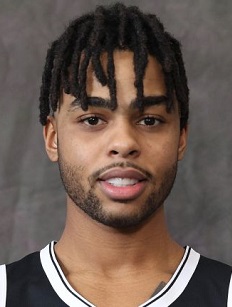 Born in Louisville, D'Angelo Danté Russell started a basketball career in NBA in 2015, as a rookie of Los Angeles Lakers. D’Angelo was playing for Lakers in 2015 – 2017, for Nets in 2017 – 2019. On July 1, 2019, Warriors acquired Russell from the Nets, as Kevin Durant’s decision to leave for Brooklyn was turned into a sign and trade.

Russell is a left-handed point guard and is considered to be one of the most promising young players in the NBA. Russell has a net worth of $12 million, including all of his properties and earnings.

D’Angelo is the native of Louisville. He was born in a family of Antonio Russell and Keisha Rowe on February 23, 1996. He grew up in a rough part of the Kentucky city. His parents were afraid of him and didn’t allow making a lot of things. He spent very few time on the streets. However, he and his older brother grew up watching basketball and playing it whenever possible.

D’Angelo’s brother idolized the NBA superstar Kobe Bryant, with whom Russell would one day play. D’Angelo idolized Manu Ginobili. He dreamed of one day being like the Spurs' crafty sixth man. Russell watched clips of Ginobili and tried to reenact them on the court. From the time he was seven, Russell had told everyone he'd play in the NBA someday. More and more, people were telling him a pro career was in his future.

Russel enrolled at local Central High School in 2010. He was the leading scorer for his high school team as a freshman and was already regarded as one of the top players in the state. It was flattering and dangerous. Antonio then thought:

"Being the No. 1 kid in Kentucky was a false pretense. I was worried he'd get caught up in what the news people and sports bloggers were saying, that he'd start thinking, 'I'm a hell of a basketball player.' He needed to experience some adversity."

After his freshman year, Russell packed his bags and headed for Florida and enrolled at the prep school that counted players such as Dakari Johnson and Joel Embiid among its alumni. After only a few weeks there, D'Angelo Russell had enough. He was ready to go home. But he could overcome his problems and helped Montverde Academy to win the National championship together with Ben Simmons.

In 2013 D’Angelo enrolled at Ohio State University. He became the first player of Buckeyes, who could score triple-double in his debut season. D’Angelo scored 19 points on average per game. He scored double figures 33 times in 35 games for the Buckeyes. Although his college team couldn’t win NCAA, he was praised for his passing, as he ranked third in the Big Ten in assists (5.0). His stats were enough to go on the 2015 Draft.

Using their highest pick in the NBA Draft since 1982, the Lakers selected D’Angelo Russell at number two. They signed a two-year $10.4 million contract. Then Russell said:

“I try to stand out wherever I go and be that star. I’m just a kid from Louisville with a big heart, big dream, and to be in this position in that franchise … is a great opportunity to really take my game to the next level.”

Lakers experienced a big crisis that year. The club laid great hopes on the rookie. Soon he made his first double-double in NBA. In March Russell scored 39 points. It was the best result among 2015-16 rookies. Meanwhile, some Lakers players were upset with D’Angelo Russell for recording a private conversation between himself and his teammate Nick Young.

In the video, Russell asked Young, who did not seem aware that he was being filmed, about having relationships with other women. Young was engaged to rapper Iggy Azalea. The video was leaked to a celebrity gossip site. Though it was unknown how the site obtained the video, it had caused tension among Lakers players.

Johnson didn’t have kind words for the former No. 2 overall pick on his way out, saying that the then 21-year old lacked leadership abilities and didn’t make his teammates better. Hearing those words from one of the league’s best-ever point guards was hard, but Antonio, Sr. told D’Angelo to use the words as fuel.

D’Angelo was traded in exchange for Kyle Kuzma. In Brooklyn the player started well, scoring more than 30 points per game. However, he was forced to miss 32 games because of his injury. In February the head coach included the player in starting five. In a month Russell earned his first NBA triple-double.

2019 was a big year for Russell. Two years after leaving the Lakers, he put together his best statistical season, putting on the All Star jersey, averaging 21.1 points and seven assists per game. Russell scored 40 points several times that season, dominating against Celtics, Magic, and Kings. Also, he made his career-high 44 points in March.

The Nets became the sixth team in a final regular season’s table. D’Angelo showed a dangerous game in the attack, which defenders could not cope. The reviewers even praised Ben Simmons, not just for his triple-double on offense, but for his defense on D’Angelo Russell after the Nets loss to the 76ers in playoffs.

In summer 2019 D’Angelo became a restricted free agent. Later he agreed to a four-year $117 million maximum contract with Brooklyn as part of a sign-and-trade with Golden State Warriors. That deal sent Kevin Durant to Brooklyn to play with his best buddy Kyrie Irving. To make the trade for Russell work within the confines of the salary cap, the Warriors had to unload salary so that they will trade Andre Iguodala to the Memphis Grizzlies along with future first-round picks.

Russell got a chance to work alongside Stephen Curry as he is going to take the leap from All-Star to superstar and help the Dubs continue their run atop the Western Conference. There's no telling how long Russell will be a member of the Warriors, but at least for now he's a big part of Bob Myers' plan to retool the Warriors in the post-KD era.

As news has reported, D'Angelo is currently in a relationship with Gabby Engersgaard. The two have been spotted together on various occasions; one such occasion includes a Yankees game. Russell hasn’t mentioned much of anything in public about his relationship to Engersgaard.

The most evidence of how they spend time together is found on Engersgaard’s private Instagram account. She posted many pictures of them relaxing on the beach or high up in Russell’s apartment overlooking the city.