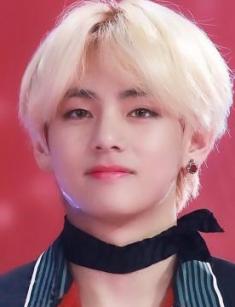 In 2017, Kim Tae-hyung was named the most attractive man in South Korea. He is a member of the group BTS (Bangtan Boys), one of the most famous k-pop bands. The musician chose his short stage name V which associated with the word “victory”.

The artist portrays a “weird” young man on the public: he can do something impossible and both shock and excite millions of fans. Many people try to copy his style, yet nobody like V can look natural in a Burberry pajama and jeans jacket during an interview.

V was born at the end of December in Daegu, South Korea, into a family of farmers. He has a younger brother and sister.

The boy showed an interest in music early and took up saxophone classes. Despite his music talent, studies were challenging for him, and three years of hard work did not improve his skills much. Tae-hyung decided to quit, but he was fond of art and kept looking for a suitable sphere. The idea of becoming a singer appeared at the elementary school: V was never afraid of the stage; on the contrary, he liked to dance there.

After several auditions, the young talent was invited to Big Hit Entertainment as a trainee. “It always felt unbelievable. I didn't know why they chose me, I also doubted. I was half believing and half dubious”, the musician remembered his first days there.

V and other students had to study dancing, acting, languages, and cultivate their voice. Trainees’ classes lasted for 15 hours a day, and they also had much homework to do.

Not all of them managed to endure the marathon. Kim Tae-hyung was a trainee for about two years and then entered the world of show business. He did not know for sure whether he would be included in the group until the last day. When journalists asked the young man what he would do without BTS, he said he would become a farmer, just like his parents.

In 2016, the artist appeared in the Korean drama Hwarang: The Poet Warrior Youth about the military dynasty Silla. Hwarang is an elite school preparing top-notch fighters; it is the story about friendship, betrayal, and love.

“I laughed and cried as Han-sung, and I was happy to be able to live as him. I hope that viewers can also feel the sincerity I did through him”, the actor told the media after the successful debut.

V’s character died because of a poisoned sword; it was supposed to kill the protagonist, Moo-myung. After Han-sung’s death, Kim inspired the audience to watch the series until the end and remember his character. This drama is the artist’s only cinematographic project by now.

Sometimes, V is mistaken for another Korean actor, Cha Tae-hyun, because of the same second name.

In 2013, Kim debuted as the member of BTS. Two years later, the young man tried to write songs for the first album of The Most Beautiful Moment in Life trilogy; he co-created the track “Hold Me Tight”.

V also wrote the music for the lead song “Run”; his group mate Jeon Jung-kook was the author of its lyrics.

2016 was marked with Kim’s solo song “Stigma”; it was included in the top 30 of the Gaon chart and top ten of Billboard. Two years later, the second solo song “Singularity” was presented; music experts appreciated it and included in the lists of best songs of the year.

Millions of fans are watching BTS members’ personal lives; whenever they appear with girls, a wave of hot discussions arises. According to the musicians’ contracts, they can have no romances that could interfere with their work. Thus, Kim Tae-hyung has no official girlfriend.

Rumors had it V was dating Irene, the member of the girl group Red Velvet; the speculations about his affair with another artist from the same group, Joy, followed. In 2015, the Internet was full of pictures where the musicians were hugging each other. Later, it was revealed that V was not allowed to show his passions on the public.

Fans continue to invent nonsense facts about their favorite. There are many fanfic works that describe the singer’s relationship with his colleague, Min Yoon-gi, and other group mates. In fact, Kim Tae-hyung and Min Yoon-gi come from the same city, Daegu.

V is the most fashionable member of BTS. As a visual, he pays much attention to his looks: the artist is always wearing makeup and trendy clothes. The young man often changes his hair color: brown, grey, orange, green, pink, red. In January 2019, the group gave a concert in Japan, and fans had the opportunity to admire the new hue: blue. Fans immediately started talking about V’s new hair color on Instagram and Twitter; while other musicians were criticized, there were no negative opinions about Kim.

Today, V continues to create new music and shoot for music videos. In January 2019, he presented the song “Scenery” which was a part of his solo project. Everybody can listen to the track on SoundCloud with no charges. The first day the song was uploaded, it had the recording number of likes in the history of the online platform.