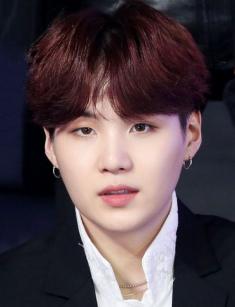 Min Yoon-gi (also known by his stage names Suga and Agust D) is a member of the k-pop boys-band BTS, popular in the whole world. He performs the rap-parts of the bands' songs and also writes music. Besides, the talented guy has established a solo hip-hop project, through which he shared his personal views and feelings.

Min Yoon-gi was born on March 9, 1993, in a South Korean big city, Daegu. He grew up in a family with an average income. Yoon-gi has an older brother. From a young age, the boy learned to be self-sufficient and started gaining his first money even before he was of age. It is known that Min changed three schools: Taejeon Elementary School, Gwaneum Middle School, and Apgujeong High School.

From his teenage years, the boy got interested in music. At first, he preferred the classics, but at the age of twelve, he discovered the hip-hop genre for himself. A year later, Min started composing lyrics for his own songs and melodies and also began studying the interface of musical instruments.

Before graduating from school, when he was seventeen years old, Yoon-gi found a part-time job at a recording studio. His skills were enough for the guy to get employed and combine education with work. This occupation was good for the future rapper; the boy took his talents to the professional level, learned to make arrangements, mix tracks and create quality music. And it was at this recording studio where he recorded his first rap-song.

When Min realized that he enjoyed making music, he developed a feeling that he wanted to tie his life and career to this art craft. At first, the guy's family opposed to this decision; however, later they agreed with their son's choice and started to support the aspiring musician actively. At the same time, Yoon-gi developed his dancing skills because he understood that it would be hard without knowing how to move beautifully on a big stage.

The professional biography of Min Yoon-gi started with a solo project. He came up with a stage name Gloss and performed in the underground rap battle. However, his solo performances could not bring success to the guy. Then he became a member of a hip-hop band, D-Town. But the turning point in his life was the membership in the boys-band BTS, which started after Yoon-gi had been noticed in the competition for young talents, where he had won the second prize.

BTS band consists of seven Koreans: Kim Seok-jin, Jeon Jung-kook, Jung Ho-seok (J-Hope), Kim Tae-hyung, Kim Nam-joon, Park Ji-min, and naturally Min Yoon-gi, who chose a stage name Suga for himself. His stage name can be translated as a "shooting guard," because, in his school years, the boy was a member of a basketball team and played in this position.

The debut album 2 Cool 4 Skool, released under the label Big Hit Entertainment with the single called No More Dreams, came out on June 13, 2013, after which the members literally woke up famous the next day. Thousands of girls all over the world became the devoted fans of the guys and started writing love letters to them.

Min Yoon-gi devoted himself to composing music for almost all the songs from the album and performing the rap parts of the songs. Fans at once appreciated the talent of the boy for arranging songs.

On August 15, 2016, the rapper posted his solo mixtape on online-platform SoundCloud, and that was the start of his independent career. The track name, as well as the guy's stage name, was August D. In his music, he brought up acute social issues, such as sociophobia and depression from which he suffered himself.

2018 was a fifth anniversary of the Min's membership in BTS and the drastic change in his life. In honor of the anniversary, the band released two albums, Love Yourself 轉 ‘Tear' and Love Yourself 結 ‘Answer' and received 125 music awards all over the world. Besides, every member of the band was awarded a fifth-class Hwagwan Order of Cultural Merit from the President of South Korea for their contributions in spreading Korean culture and language. As a result, they became the youngest possessors of this award.

Min Yoon-gi does not hide the details of his personal life. Currently, he does not have a girlfriend, wife or children because he simply does not have time for serious relationships and a hunt for a perfect girl.

The Korean states that he had always struggled when it came to communicating with the opposite sex. He could not come up to his high-school girlfriend for a long time because of his shyness and lack of self-confidence. Eventually, Yoon-gi wrote a love letter to her in which he expressed his feelings in detail.

Even though hundreds of fans all over the world dream about having a relationship with the rapper, he has not had any other girlfriends since high school. A fun fact: boys can also try to fight for his love, because in 2014 in one of the interviews Min admitted that he did not care a bit about the gender of a person. A vital point in choosing his significant other is charisma and energetic personality.

Even though now the guy is not active on Instagram, his fans do not worry and do all the job of posting photos of him by themselves. The followers of the fan-account of Suga immediately find out, in which color the rapper had his hair died this time and how he spent his weekend.

In his spare time, the musician loves to chill, compose songs and spend his time with his dog Min Holly, a Toy Poodle.

Min Yoon-gi has a net worth of $8 million. In 2019, Min Yoon-gi continues to compose music for his band, as well as for his solo project, participates in new episodes of the television show Run BTS! and gives concerts.

On February 10, the rapper appeared on the red carpet of the 61st Grammy Awards Ceremony together with his band. The celebratory event at which the boys performed as the special guests and the presenters of the award for best R&B album, took place in Los Angeles.

At the moment the BTS band is working hard on a fresh album which is going to mark the beginning of a new era. The musicians revealed in one of the interviews that they had already worked through the general concept of the album and recorded a couple of first tracks.