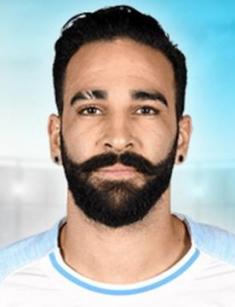 The French soccer player has earned much fame as an athlete: he has been a member of prominent European clubs and became the champion with the national team. Besides, the interest in the man is fueled by the details of his personal life: the handsome center back dated Pamela Anderson, who was almost 20 years older. Thus, Rami’s name regularly appears in tabloids.

Adil Rami was born in Bastia, France, in 1985. His Moroccan parents divorced; the mother brought up four kids alone and tried to provide them with a simple but lovely life.

The eldest sister, Feda, became the mother’s primary supporter and helped take care of the youngest kids. She tried to make Adil study well, but the boy worked part-time in the morning as a public service employee and spent time training after midday. The family became Rami’s loyal fans and always supported him in the field.

The future soccer celebrity joined his first club at nine. Étoile Fréjus Saint-Raphaël was a fourth-division member in France. Rami debuted in the season 2003/2004 as an attacking player but switched to defense for the sake of the team.

In 2006, Adil signed the first professional contract with Lille. Initially, the center back was only a reserve member; as long as he gathered the valuable experience, the young man came to the field as number 23. It happened at the end of the season. Despite Rami’s injury, the club extended the contract with the promising player for five years.

Adil had 129 matches for Lille and scored nine goals. Not long before 2008 Africa Cup of Nations, he was invited to the Morocco national team, but the sportsman refused to participate: he hoped to join the stronger France national team. Rami did get there in 2010, but it was a friendly match; he was not included in the first lineup at the World Cup.

Little by little, the center back was developing his club career. In the season 2010/2011, Lille won the country’s championship and Coupe de France; Rami’s splendid manner made him a notable figure for transfers.

The sportsman left Lille and transferred to Valencia, Spain in 2011; he had 60 matches and scored two goals there. Three years later, Rami joined Milan and then Sevilla; the latter team won the UEFA Europa League in 2015-2106. In 2017, Adil returned to France and represented Marseille.

In 2018, the center back had the most prestigious achievement in his career: his national team won the 2018 World Cup. However, Rami did not play a single match there. Following the victory, he announced the finish of his national team career. Overall, the man had 35 matches for his country.

In 2011, Adil Rami met the French photo model Sidonie Biémont. He came to the French Open for tennis, but a beautiful brunette caught his attention immediately.

The couple started dating and living together. Biémont followed her boyfriend and moved to Italy and Spain with him. In 2016, the twins Zyan and Madi were born. However, the relationship deteriorated; perhaps, it was the meeting with Pamela Anderson in spring 2017, when the actress and the athlete attended Formula One Grand Prix in Monaco.

The age gap did not prevent the couple from being together. Their romance was passionate and fast-developing. In summer, Pamela introduced her new boyfriend to her mother and moved to Marseille where Rami resided. She often attended Adil’s matches and did not hide her feelings to the man. Pam shared the details of the romance with journalists and emphasized that Adil did not see her age. However, some ideas were disturbing: Anderson did not want to find herself with a young lover while she would become old.

The player proposed to Pamela during FIFA World Cup 2018, and she said yes. One could see the Cartier ring with a diamond on her finger when she went out. However, the couple announced their break-up in fall 2018; the media tried to learn the reasons but failed. In spring 2019, the celebrities were seen together as if nothing had happened.

In June 2019, Adil Rami and Pamela Anderson split up again. The woman revealed the reasons: she accused her ex of maniac jealousy and physical abuse; besides, Anderson disclosed Rami’s conversations with Sidonie Biémont to prove her point.

Still, Biémont refuses to call Adil a monster and abuser; she supported the athlete on her Instagram. In her turn, Pamela marked Rami’s generosity and affectionate nature and complained that he made her stop communicating with her friends and controlled everything in her life. More than that, the actress accused Adil of cheating, but he immediately confuted it. Although the man did not give many details, he wrote a post and denied the fact of abuse, claiming that living a double life was never acceptable for him.

Today, the athlete is single, and many women feel happy about it. Rami communicates with his fans on Instagram and shares pictures and facts from his life. One can see many photos where the athlete is practicing. Adil’s height is 6.23 feet (190 cm.), and his weight is 198.41 lbs. (90 kg.).

The sportsman continues to play for Marseille; his four-year contract signed in July 2017 is still valid. Rami participated in all 16 matches in the previous season, had one own goal and one successful assistance. However, the club administration suspended him from training because of the disciplinary infraction: the player said he needed to miss a practice because of a family issue but instead participated in Fort Boyard.