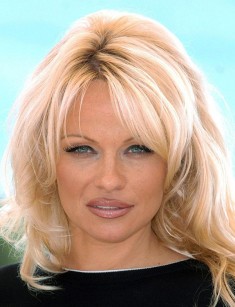 Pamela Denise Anderson is a Canadian-American actress and model. She has become world-famous thanks to the television series Baywatch. Anderson is also known as a model who posed for Playboy magazine. She was considered a sex symbol of the United States in the 1990's.

Pamela was born on July 1, 1967, in the Canadian town of Ladysmith, British Columbia. She came from a working-class family. Her father, Barry Anderson, was a furnace repairman, and mother Carol Grosco worked as a waitress. It is interesting that Anderson has Russian ancestry as her maternal great-grandmother emigrated from Russia.

Pamela Anderson got some press coverage right after her birth since she was the first child born on the 100th anniversary of the Canadian Constitution, 1867.

The young family soon moved to the town of Comox, where the paternal grandfather, the public leader of Finnish emigrants, lived. After settling in a new place, Pamela attended Highland Secondary School. The girl was interested in sports. She was fond of volleyball and played for the school team in the amateur league. After graduation from the school in 1985, Pamela moved to Vancouver, attended the courses of fitness instructors and began to work as a physical education teacher.

In 1989, Anderson attended a BC Lions Canadian Football League game at the stadium, where she was accidentally shown on TV. The girl wore a T-shirt and cheered actively for the athletes. She attracted the attention of the Labatt Brewing company, which hired Anderson as an advertising model and promoter.

When advertising with Pamela Anderson spread throughout North America, Playboy, the world-famous male magazine, offered the girl to take part in a nude photo shoot. She first appeared as the cover girl on Playboy magazine's October 1989 issue. Pamela soon moved to Los Angeles to further pursue a modeling career.

In 1990 she became the Playboy leading model and was repeatedly chosen as Playmate of the Month. Her photos appeared not only on the covers but also on centerfold photos. During the same period, Pamela Anderson had plastic surgery and changed her bust size. At first, she increased her bust size to 34D but soon changed it to 34DD, which looked disproportionate because Pamela's height was 170 cm and the weight was 50 kg.

Pamela Anderson's Playboy career spans more than 20 years, and she has appeared on more Playboy covers than any other model. Pamela posed naked for the January 2016 issue and said that she planned to end her career as a model.

Besides, Pamela collaborated with such magazines as Stuff and GQ and posed naked for them. In Elle Canada, she advertised various clothing lines and appeared on the cover.

Later, Pamela had a lip augmentation several times and periodically improved the facial oval with botox injections. She also had repeatedly hips liposuction. In 1999, Anderson had her breast implants surgically removed, which shocked the fans.

In 1990, Pamela Anderson appeared on TV in a fiction film. She took part in several serials and sitcoms, mostly playing bit parts in one or two episodes. She also played the role of a cheerleader in the large-screen action movie The Taking of Beverly Hills.

In 1992, she received an offer from Michael Berk, the creator of the series about rescuers patrolling the beaches of Los Angeles. Pamela began filming in the third season of the series Baywatch and played there until the end of the 5th season (111 episodes). The actress contributed to the fact that this series was listed in the Guinness Book of World Records as the most watched TV show in America of all time, with over 1,1 billion viewers. Anderson returned to the role of C. J. Parker in 2003, starring in the sequel Baywatch: Hawaiian Wedding.

In 1996, David Hogan’s action movie Barb Wire, based on the comic book by Chris Warner, was released. The film is titled "Barb Wire," which is the nickname of the title character, Barbara Rose Kopetski (Pamela). When the film was released, there were rumors that the character's name was the actress’s real name, and Pamela Anderson is just a pseudonym. But it is not true.

In 2003, Pamela played a secondary character of Becca in David Zucker’s black comedy Scary Movie 3, which grossed $ 220 million. In 2008, the comedy Blonde and Blonder with the participation of Pamela Anderson and Denise Richards was released. The same year, the actress appeared in the parody film Superhero Movie, where she played the Invisible Girl.

In 2004, the actress tried her hand as a writer and released the book Star, co-written by Eric Shaw Quinn. The novel narrated about a teenage girl trying to become famous. It is not the actress’s biography, but Pamela wrote a little bit about her own experience. After the release of the novel, Anderson began touring the United States, meeting fans at Wal-Mart stores and signing books for them.

The new book titled Star Struck, published a year later, was a logical continuation of the first novel. The author wrote more about her life experience, with the help of the character she expressed her own opinion about the difficulties in the celebrities’ life, and it was also a thinly veiled look at her experience with the first husband.

Pamela Anderson’s first husband was musician Tommy Lee, a drummer of the rock band Mötley Crüe. They married in February 1995 and had two sons: Brandon Thomas and Dylan Jagger. The couple divorced in 1998. During this time, she was known as Pamela Anderson Lee, and this name was also listed in the closing credits. Subsequently, Tommy and Pamela reunited twice in 2000 and 2008, but they did not stay together for more than a few months.

There was a huge stir in the late 1990's when unknown people released to the public the couple’s home videos on the Internet. Resourceful Pamela sued the video distribution company, and it paid a large sum of money in moral damages. After a while when one more tape involving Anderson and her new boyfriend, musician Bret Michaels, appeared on the Internet, the actress sued the site owners and got $ 90 million again.

After the divorce, the actress soon became engaged to showman and model Marcus Schenkenberg. They lived together until 2001. In 2003, Pamela married Robert James Ritchie, better known as singer and musician Kid Rock. Their wedding took place on a large yacht near Saint-Tropez, France. This marriage lasted only three years, and in 2006 the couple divorced.

In October 2007, Pamela Anderson married film producer Rick Salomon again. Their marriage took place at The Mirage casino in Las Vegas. But in February 2008 they divorced. Rick and Pamela reunited in January 2014. They married again, but a year later she filed for divorce, which was finalized in April 2015.

Pamela Anderson has been living in Southern California since 1989, and in 2004 she became a citizen of the United States. The actress stopped eating meat in her early teens. Now she is a vegan and an active member of the animal protection organization People for the Ethical Treatment of Animals.

In 2016, the media reported on the close relationship between Pamela Anderson and the founder of Wikileaks, Julian Assange. The American actress regularly visited him at the Embassy of Ecuador in London.

While people were discussing two charismatic personalities’ possible love affair, Pamela surprised fans again. Her new boyfriend was the defender of FC Sevilla and the French national team, Moroccan Adil Rami. The 31-year old footballer, who in September 2016 became the father of twins, broke up with their mother, the French model Sidoni Bemont, soon after the children’s birth.

In 2017, Pamela Anderson was invited to shoot in a screen version of the series Baywatch directed by Seth Gordon, and she played herself. Dwayne Johnson, Zac Efron, Priyanka Chopra, Alexandra Daddario performed the title roles in the film. The comedy premiered in Russia on June 1, 2017.

Pamela continues to experiment with different hobbies. In the summer of 2017, the 50-year-old actress created a photo collection for ODDA, and also posted some pictures on her personal Instagram account. The followers appreciated the talented model, which inspired Pamela to continue the experiments. Pamela Anderson's model was her son Dylan, who, as his elder brother Brandon, followed in his mother’s footsteps and was engaged in the modeling business for several years. In 2017, the young model participated in the presentation of the Dolce & Gabbana new collection where Stallone’s daughters also took part. The show caused a stir among fashion experts.

Having lived on the Pacific coast for most of her life, Pamela Anderson decided to change her place of residence. Now the actress is looking for an apartment in Europe. Pamela has not chosen the city of her dreams yet, but the actress is sure that it must be London or Paris. 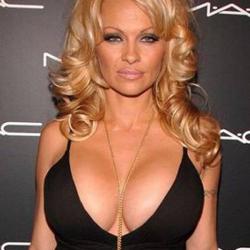